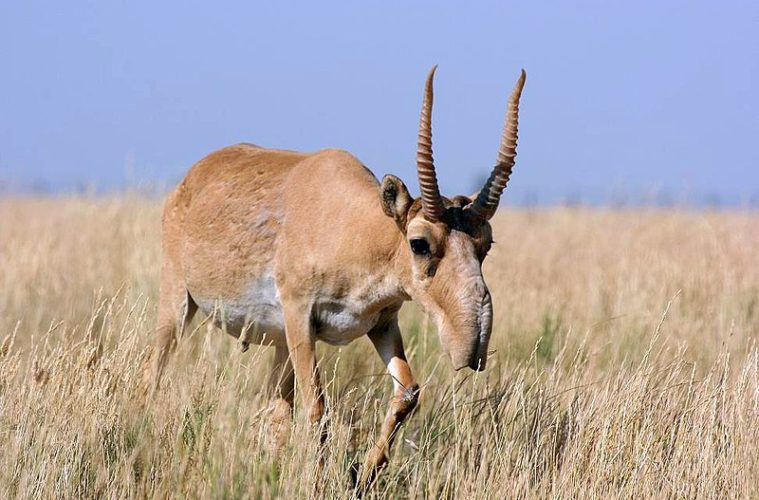 How climate change could alter us from the inside-out.

On one spring morning in 2015, a single Saiga Antelope suddenly dropped dead on the peaceful grasslands of northern Asia. No obvious trauma, no nearby predators and no explanation as to why this particular animal lost its life. The Antelope lived in a herd that numbered over 200,000 individuals and within a week, the entire population laid lifeless on the plains of Kazakhstan. Scientists now believe that they understand why this mega-death occurred, but it does not bode well for humanity.

With their bulbous eyes, twisted horns and tubular snout, the Saiga Antelope (Saiga tatarica) is a distinctive species on the Siberian and Kazakh grasslands. Whilst in recent times these wandering animals have been reduced to four discrete populations around the southwest corner of Russia, Kazakhstan and northern Mongolia, records show that they once spanned all the way from the British Isles to Alaska. They are highly vulnerable to wolves so use the ‘defence in number’ tactic, living in enormous herds with hundreds of thousands of individuals and interestingly, give birth to twins significantly more than to single calves. Historically, the Saiga Antelope has played an important role in the local economy of northern and central Asia, mainly through meat production. Between 1955 and 1989, over 87 thousand tonnes of Saiga meat was collected in Kazakhstan alone. According to Professor Milner-Gulland from Oxford University, it was poverty, a market for meat and a lack of law enforcement that caused a “95% decline in [Saiga Antelope] numbers over a ten-year period.”

Curiously, this is a species that is prone to mass-deaths. In 1984, 100,000 individuals perished in the Russian Ural Mountains, representing 67% of the local population and in 2017, a sub-species of the Saiga suffered a similar fate after a virus infection spread into their herd from nearby livestock.

Astonishingly, these types of mass-deaths are not uncommon in nature. In 1988, 20,000 Harbour Seals died due to an outbreak of phocine distemper virus, a disease which also killed 1,600 Sea Lions in New Zealand a decade later. In 2003, over 18,000 Muskoxen starved to death in the Canadian Arctic after a ‘rain-on-snow event’ encased their food in ice. More recently in 2007, approximately 300 adult male Sub Antarctic Fur Seals perished after being exposed to Streptococcus sanguinis, a bacterium carried by house mice, an animal that was accidentally introduced to the region in the late 1800fs.

In most cases, a few individuals survive these mass-death events, but in this case every Saiga Antelope in this herd died, resulting in the species being listed as Critically Endangered by the IUCN. Richard Kock, a wildlife veterinarian at the London Royal Veterinary College said that “I have worked in veterinary diseases all my career and I have never seen 100% mortality.” The bodies of the Betpak-Dala Siga population scatter the grasslands. SergeiKhomenko@WikimediaCommons

Kock has since described the scale of the Saiga deaths as “extraordinary” and the event did gain the attention of the world’s media for the briefest of moments. In 2016, the BBC documentary series Planet Earth 2 covered the tail-end of the mega-death and stories on the event were published in National Geographic, CBS and The Guardian amongst many others. The world may have been stunned from the images of decaying Saiga bodies littering the grasslands; however, as the media often does, their attention quickly shifted away from the fate of these Antelope.

After several investigations into the cause of death, scientists discovered that it was the result of a fatal blood poisoning known as haemorrhagic septicaemia. What is both fascinating and terrifying about this discovery is that this was caused by a previously harmless, naturally occurring bacterium found in the Saiga respiratory tract called Pasteurella multocida. The Saiga Antelope is an ancient species that has been around for millions of years; therefore, we can presume that this bacterium has existed within their nose and throat for a similarly long time. Researchers believe that an abnormally warm and humid season caused these bacteria to grow exponentially, eventually overwhelming the very animal that it had formerly cooperated with for millennia and ended with the near-total decimation of an entire sub-population. Escerichia coli, one of the many species of bacteria found in the human gut. National Institute of Health, US

Where this story takes a worrying turn for humanity is when we consider that we also possess an extraordinarily large community of similarly naturally occurring bacteria in our own guts that aid digestion and help regulate moods. Moreover, there are so many of these bacteria that not all of them have been identified yet.

There is a genuine concern that a warming global climate could trigger a similar event to that experienced by the Saiga from within our own guts. David Wallace-Wells, author of ‘An Uninhabitable Earth: Life after Warming’, explains the potential catastrophe that climate change could cause to our gut biome: “Now, most of those bacteria and viruses are not going to be transformed by a degree or two-degree warming in our environment. But there are so many of them, there is a chance that one could. It’s hard to dismiss that.”

Worryingly, this issue is not being discussed as a major consequence of climate change and we do not imagine the ramifications of a warming planet affecting our daily lives in such a personal way. No longer can we afford to imagine climate change as merely the melting of ice caps thousands of miles away; it could affect us all in various different ways, including from within just like the Saiga.