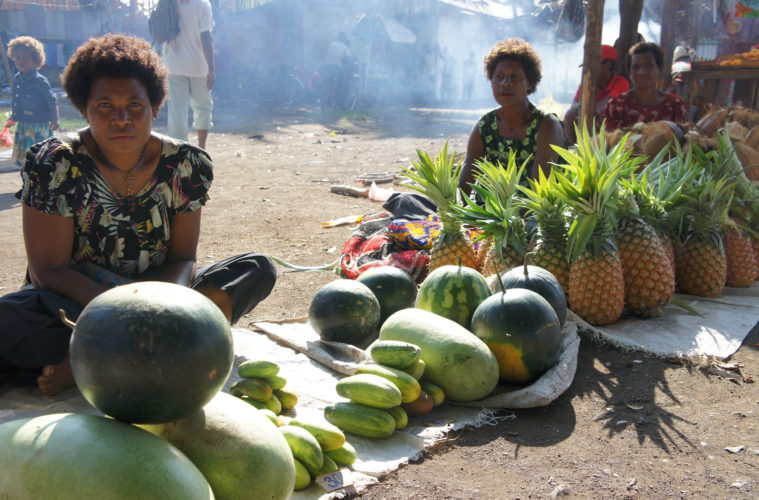 Climate change may be global, but it does not affect all of Earth’s citizens equally – and those who are hit hardest tend to be vulnerable groups from poorer nations. That’s why The Nature Conservancy sat down with a group of women from the Pacific Islands, to discuss the unique challenges faced by women in this vulnerable region, and the ways they are acting as leaders in the fight to survive a changing world.

Human-caused climate change is an increasing problem worldwide and is responsible for causing or worsening an entire gamut of ecological challenges. It is known to particularly impact island nations, exacerbating environmental problems such as sea level rise, saltwater intrusion, drought, extreme weather events, loss of coral reefs and associated loss of fish populations, coastal erosion, and more. And while climate change may be a global problem, its consequences are not equally dispersed. Divisions of class, nationality, race, and gender are all known to intersect with the effects of climate change, often to the detriment of more vulnerable groups.

For example, climate change and the resulting environmental disasters are known to disrupt women’s lives in unique ways. Studies have shown that even an environmental disaster encompassing all of society, such as a drought or tropical storm, will impact women’s lives in gendered ways that men may not experience. Yet even though women are half the world’s population, and women’s issues are human rights concerns just as much as men’s, the current literature on climate change also shows that women tend to be neglected in policies to tackle the impacts of climate change under the false assumption that most environmental issues are experienced equally.

A new, critical paper out of The Nature Conservancy has sought to combat that tendency and to give the women dealing most with the effects of climate change in their daily lives the space to speak. The paper’s authors met in various workshops with women from seven Pacific Island nations (Marshall Islands, Palau, Yap, Kosrae, Chuuk, Pohnpei, and Papau New Guinea), where climate change is having some of the most drastic and devastating impacts. Many of the participating women were leaders in their communities, and they ranged in age, level of education, and socioeconomic status.

They were invited to come together to discuss the problems that women face from climate change, the innovative ways they are seeking to overcome them, and the steps that the international community can take to assist these communities that are facing the heaviest consequences of the carbon-emitting actions of far-removed nations.

The testimony of the women in the workshop, as well as previous studies, highlight the ways in which the stresses and challenges of climate change exacerbate gendered issues in many communities.

For example, domestic violence increases as a consequence of climate change. The leader of the women’s group of the Marshall Islands expressed in the workshop that when climate change causes drought, and women don’t have enough water available, a wife may be less able to “cook the food, or do the laundry, or prepare the husband’s clothes, and she can end up experiencing violence from her partner.”

Droughts also lead to those who retrieve the water (typically young girls) being forced to walk farther from home to reach distant wells when their own wells run dry, spending more time alone and vulnerable and therefore are significantly more likely to be assaulted. The paper’s authors add that, “In Vanuatu in 2011, following two tropical cyclones, a 300% increase in new domestic violence cases was reported, and research in Samoa showed that people displaced by disaster were at higher risks of gender-based violence than people who stayed in their communities.”

In addition to leaving women more vulnerable to violence, the need for women to walk farther for water or firewood or simply spend more time on chores that have been made more difficult as a result of climate disasters also takes time away from them pursuing education or generating their own income – pushing those two forms of women’s empowerment that much further out of reach.

Another climate-caused issue that affects women particularly is that of environmental refugees. Whether because one’s home region has been devastated by climactic disaster, reduced to dust through drought and famine, or has simply been swallowed by the rising seas, climate change has produced crowds of suffering refugees seeking settlement elsewhere and is likely to create many more in upcoming years.

Climate refugees are already a vulnerable group; in a new land, where they may not speak the language or understand the customs, and certainly have no community connections to assist them, refugees already become more vulnerable to violence and exploitation. The women from the Pacific Island workshop expressed their frustration at this situation, and their desire for their respective governments would set aside more land to aide the integration of climate refugees into the community; and they also wished that governments would make it a priority to provide land to women specifically, expressing that, “in some Paciﬁc Islands, women are not entitled to land rights due to customary laws and practices; thus, policies that address land ownership inequity are needed as climate change is reducing the available land.” Yet the study also demonstrated clearly that the indigenous women of the Pacific Islands are more than mere victims of climate change. They are also active members of their communities, leading efforts to adapt to and overcome the challenges climate change presents.

Many forms of traditional indigenous knowledge of how to endure inclement weather become even more valuable during the current climate crisis. Women in the workshop explained how they are bringing back traditional guidelines of laying palm leaves over the soil to keep the ground in cool and reduce heat stress on plants, and transferring young plant shoots to shadier areas. They are also perfecting the traditional art of drying and fermenting breadfruit to prepare for times of famine, which is an ever-increasing threat.

In addition to maintaining these useful traditions, Pacific Island women are also working to innovate creative new solutions. They are leading efforts to investigate more salt-resistant strains of taro plant in order to adapt to saltwater intrusion, to plant native plants on shorelines to reduce coastal erosion, to braid leaves into structures that capture rainwater, and to keep well-stocked seed banks in order to replant flooded areas. They have also invented new methods of growing vegetables in plastic bags and raised beds, which add planting space in areas of severely limited land as well as preventing saltwater intrusion.

The indigenous women in the workshop also highlighted that while they are working to maintain old traditions and invent new ones, they are concerned for the maintenance of these practices in the future. They worried that traditional knowledge is being lost in recent years, as it is typically passed through oral tradition from mothers to daughters, yet disruptions to families through hardships (or even a Westernized perception among the youth that traditional knowledge is not needed if they go to school) have been breaking those intergenerational connections and losing precious knowledge.

For example, the women pointed out that there are areas on each island where shallow wells may be found and used as a source of emergency water in times of drought; yet today only the older women of the islands know where the shallow wells are. If the oral traditions are not maintained, that potentially life-saving knowledge could be lost.

Although traditional practices can be invaluable, the women in the workshop also expressed that it does have its limitations. For example, in Palau the traditional planting season is in August; yet if climate change or an approaching El Niño is likely to alter the weather and therefore the best time for planting, the people need to be informed in order to take this into account. Therefore, the discussion revealed the need to combine both modern science with traditional knowledge without discounting the value of either.

The paper’s authors also emphasized the lack of additional research surrounding the intersection of climate and gender, particularly in indigenous peoples. What research does exist discusses only the increased vulnerability of these groups without highlighting their ingenuity and innovation, which runs the risk of portraying indigenous women as no more than passive victims of Western-fueled climate change.

Crucially, women in the study (many of whom already founded or led women-centered organisations seeking to prepare women to overcome climate challenges) emphasised the need for their work to be valued and funded, often a struggle for a small nation even if the political will is there. As the authors worded it, “Women hold valuable traditional knowledge gained from their individual experiences adapting to environmental changes over generations. Women also face equity and justice obstacles that prevent them from expressing, sharing, or applying their knowledge.”

The worldwide alarm about the growing ecological disasters of climate change means that substantial international funds earmarked for climate projects do exist – but the process of applying for and getting approved for international aide can be daunting, and some organisations may not see why women’s groups quality for climate change funds. There was almost unanimous agreement among the women that “there is a need for donors and international organizations to greatly simplify criteria and processes for accessing climate change ﬁnancing, which is particularly disadvantageous to small states.”

Overall, the women in the workshop concluded that they would benefit most from “reinforcing traditional knowledge and leadership, supporting women’s groups, and policies that better address their needs and support their adaptation eﬀorts (e.g., those that address the potential for violence against women and girls following disasters, limited infrastructure and support services for environmental migrants, and inequities of land ownership).”

As the newest paper from The Nature Conservancy as well as multiple previous studies show, environmental issues are not removed from issues of gender inequality, racism, and classism. Instead, they are deeply intertwined with these issues, and any policy to address the effects of climate change which does not acknowledge this is ultimately going to be insufficient.

When Western scientists and policymakers discount the value of traditional knowledge of indigenous peoples, or portray them as no more than powerless climate victims, or when wealthy nations show apathy for displacing the consequences of their actions onto poorer nations, then the question of crafting a policy to combat climate change becomes more than a matter of restoring damaged ecologies or minimising species extinctions. It becomes a question of justice and morality. Raising the voices of marginalized peoples, as The Nature Conservancy has done, is one way to ensure that the future we are striving to create on this vastly changed planet will be more equitable than the one we are leaving behind.