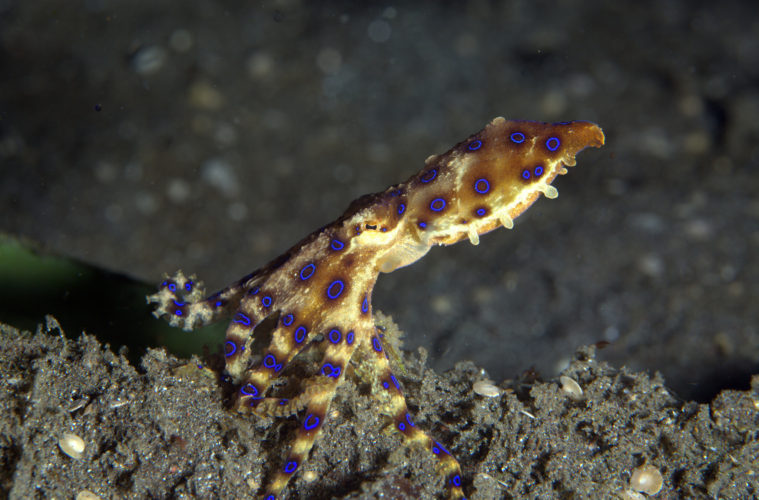 Why Do Female Octopuses Have So Many Mates?

Female cephalopods (octopuses and squids) of many species are happy to mate with multiple males throughout a breeding season – with no obvious benefits to themselves or their offspring. New research out of the Australian Institute of Marine Science and James Cook University seeks to understand what these frisky females gain from having so much sex.

The Perils of Polyandry

Biologists know that polyandrous mating systems (in which a female will regularly mate with multiple males throughout a breeding season) may evolve in species where the act of mating provides the female with direct benefits. For example, each male she mates with may gain her more resources or access to high-quality territories, or her offspring may enjoy the parental care of several fathers.

But as a general rule, polyandry is rare when females or their offspring do not directly benefit. This is because unlike a male’s sperm cells, which are plentiful and easily replaced, a female has a finite number of eggs she can produce in her lifetime – making each one precious, and each mating a crucial decision. If high-quality males are available, it’s likely not in the female’s best interests to waste valuable eggs on less-appealing males. After all, the age-old adage of sexual evolution almost always boils down to “Eggs are expensive; sperm is cheap.”

That’s why it’s so surprising that many cephalopods are widely promiscuous, with multiple males mating with multiple females seemingly indiscriminately throughout the breeding season. But cephalopod fathers don’t appear to provide resources or paternal care – so why do females bother entertaining so many mates, ‘wasting’ precious time and energy?

Several scientists, including Dr Peter Morse of James Cook University, speculated that this strange system allows females to increase not the quantity but instead the genetic quality of their offspring. A female cephalopod can actually store the sperm from multiple males in her body – it helpfully comes enclosed in “sperm packets” – and the resulting clutches of cephalopod eggs at the end of the breeding season are usually of mixed paternity.

It may be that female cephalopods are ‘hedging their bets’ by producing a clutch of offspring with great genetic diversity; at least some of those gene combinations are bound to be especially advantageous. Yet on the other hand, females do sometimes reject a male’s advances, and scientists have noticed that often the paternity of cephalopod clutches is highly biased towards one or two males – so there may be more going on here than a simple evolutionary strategy of maximising genetic diversity.

Researchers have proposed one explanation known as ‘cryptic female choice.’ As Dr Morse and colleagues explain in their latest study, “Theoretically, if females can assess male genotypes and have control over which males’ sperm they use to fertilise their eggs, they could increase their fitness by mating with multiple males as they encounter them within a breeding cycle and then preferentially use sperm from the highest quality and/or most genetically compatible male(s) post-copulation.”

Yet this long-theorised idea had never been proven or even properly tested, until recently.

Dr Morse and his team decided to use controlled lab pairings and genetic analysis to test and investigate this hypothesis. They captured thirty-six wild southern blue-ringed octopuses (Hapalochlaena maculosa) from Cockburn Sound in Western Australia and systematically paired them up in the lab in what was essentially an octopus version of First Dates. With each pairing, they observed and recorded if the female was keen to mate or not so much, how long the pair’s inevitable love-making lasted, and which individual was the first to call it quits.

After all the pairings were complete and the males released back to the sea, the female octopuses settled down to lay their strings of eggs. By comparing the genetics of these offspring with the known genotypes of the potential fathers, Dr Morse and team uncovered some fascinating patterns. For one thing, mating chronology appeared to be important, as the first male to mate with any given female seemed to have a slight advantage and father more of her offspring than the males that came after. The researchers also observed that male southern blue-ringed octopuses appear to do their best to maximise the time spent copulating with the female, almost always waiting for the female to end the session  – but does this behaviour actually boost the male’s percentage of paternity in the resulting clutch?

Surprisingly, not so much. According to the researchers’ results, the time spent copulating didn’t seem to affect resulting paternity (i.e. males who ‘took longer’ mating with the female didn’t have any more offspring than those who were quicker). Dr Morse and team believe this behaviour may instead be a form of mate guarding; after all, the longer you can keep the female engaged, the longer competing males have to wait.

As for ‘cryptic female choice,’ this study indicates it is unlikely in this species, since sperm from all males seemed to mix equally in both of the female octopuses’ oviducts. If the female was in any way selectively utilising sperm from one male over another, one would expect to see some form of physiological division or retention of particular sperm. Instead, the quantity of sperm each male could produce seemed to dictate paternity outcomes.

Only continued research will establish what exactly female cephalopods stand to gain from such a promiscuous and polyandrous mating system. Yet while ‘cryptic female choice’ was not supported by this study, there was one intriguing caveat to this observation – this species does seem to have a physiological mechanism to lesson fertilisation by relatives.

In one pairing, the researchers unwittingly paired a female with her full-sibling brother, a fact which was only realised during genetic analysis after the event. In this case, the female’s brother fathered an unusually low percentage of her offspring than would be expected; so there may in fact be some chemical defense against incest, through mechanisms yet unknown. Perhaps octopus incest could be an intriguing area for future research!