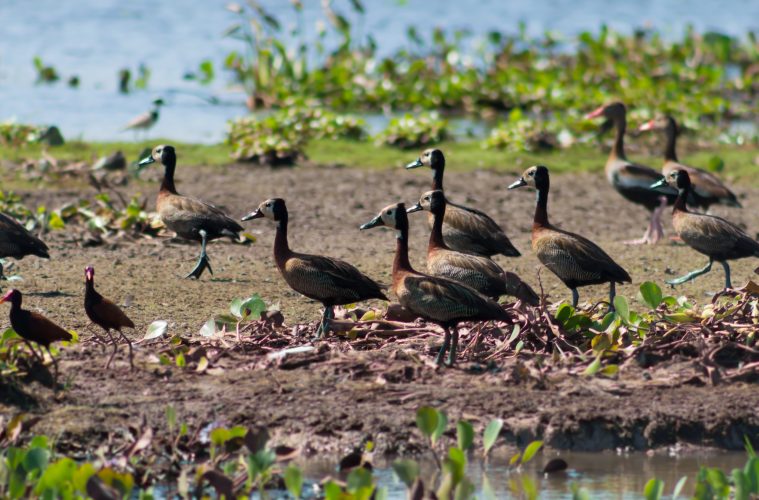 Palm oil is a key component of about half of all packaged products sold in the supermarket, from baked goods to lipstick to shampoo, and plantations growing the oil palm (Elaeis guineensis) are constantly expanding to meet the world’s rising demand. The rapid growth of the industry has led to the destruction of enormous areas of tropical forest to make room for agricultural expansion, threatening the survival of many charismatic species of conservation concern, such as clouded leopards (Neofelis nebulosi) and orangutans (Pongo borneo).

Recently, successful campaigns to raise international awareness of the consequences of palm oil production have put increasing pressure on oil palm companies to expand their activities elsewhere. While the relief this may afford tropical forest ecosystems cannot be overstated, scientists warn we must be aware of the risk of allowing agriculture development to simply change focus from degrading one biodiverse ecosystem to degrading another.

Oil palm plantations are now targeting tropical savannas instead, under the assumption that these areas are less biodiverse than forests and therefore agricultural expansion there will have less of an environmental impact. Yet natural tropical savannas do support a unique and important ecosystem in their own right, and in particular they can provide valuable habitat for many species of waterbird such as the Great Egret (Ardea alba) and the Wattled Jacana (Jacana jacana).

One excellent example of a natural tropical savanna can be found in the Llanos region of Colombia. Like many tropical savannas the Llanos is a mosaic of habitat variety, with patches of shrubs, wetlands, and riparian forests scattered throughout vast meadows of native grasses. The region is home to hundreds of different species of birds, vascular plants, fish, and mammals, including the White-faced Whistling Duck (Dendrocygna viduata) and the wild cat Jaguarundi (Puma jagouaroundi).

Sadly, the beauty and ecological wonder of this area has been greatly overshadowed by its more famous neighbours (the adjacent Amazonian and Andean ecosystems) and at present only 4.6% of the Llanos savanna system has been granted any kind of protection status. In fact the Colombian government has earmarked a staggering 70% of the Llanos as area suitable for conversion to agriculture, primarily oil palm, largely based on the assumption that there is little biodiversity in the region to disturb. Yet this belief in the low biodiversity and therefore low vulnerability of tropical savannas has been untested by empirical study, until now.

Wildlife researchers and ornithologists recently set out to determine if oil palm plantations in the Llanos do impact the abundance and diversity of local bird species (both on the plantations themselves and on the savannas nearby) as well as identify which species are the most sensitive to the loss of natural tropical savanna habitat. These expert bird-watchers spent hours upon days upon weeks systematically observing, identifying, and cataloging the bird species present in savannas vs oil palm plantations to paint a clear picture of which species each potential habitat could support. After calculating and statistically modelling the results, the research team was finally able to understand how different factors influence the abundance and diversity of bird species in the Llanos—and the results turned the oil palm industry’s prevailing assumption on its head. The beauty and ecological diversity of the Llanos has long been overlooked, and over 70% of the area may be converted to agriculture. © Neil Palmer/Flickr

Not a Diversity Desert After All

Out of the 140 bird species identified by the research team an alarming 41.5% were found only in the savanna and not on the oil palm plantations, including two species of conservation concern, the Bearded Tachuri (Polystictus pectoralis) and the Crestless Curassow (Mitu tomentosum).

“Our results suggest that oil palm expansion is likely to be having rapid and deleterious impacts on bird diversity in the region,” the study’s authors gravely report. Savannas adjacent to oil palm plantations suffered from a reduced bird population as well, revealing that oil palm conversion could be a one-two punch: both replacing a large area of natural habitat, and negatively impacting the habitat that remains.

The research team also discovered that specialist species, those birds which relied on a particular habitat type (such as aquatic areas or riparian forests) or a particular diet (such as insectivorous birds or carnivorous birds), were particularly sensitive to the conversion of savannas to oil palm. This is a true shame as migratory birds and specialist species often tend to be the most unique and interesting examples of the diversity of life, compared to the generalist species that adapt to live almost anywhere (for example, pigeons and crows).

In light of all this, the study’s author’s ultimately conclude, “The Llanos region is particularly important for waterbird species, supporting large populations of colonially breeding wetland species that are known to be sensitive to environmental change…Our results suggest that large-scale oil palm development within the Llanos could have significant negative impacts on waterbird communities due to direct habitat loss, as well as potential indirect impacts due to changes in drainage and agrochemical use.”

How do we Safeguard Savannas?

Tropical savannas already face pressure from many human activities, such as gravel and limestone extraction, intensive cattle grazing, and other agricultural activities like soybean and rice. Despite a misperception of tropical savannas as not very diverse, they in fact support high levels of unique biodiversity and scientists even predict tropical savannas may soon become one of the world’s most threatened habitats—so it is imperative that these areas receive more protection to combat the increasing exploitation they face.

Unfortunately, Colombian law is currently insufficient to protect their natural ecosystems from agricultural development. In fact as a result of recent political shifts in Colombia, there has been a renewed interest in the economic development of natural areas, particularly with regards to rapid oil palm expansion. There is a real risk that this agricultural development could be implemented quickly with little respect for biodiversity impacts.

The study’s authors urge policymakers to guide the expansion of oil palm agriculture in a manner that seeks to minimise environmental impacts, and in particular they suggest directing development towards already degraded areas (such as cattle pastures or areas previously used for illicit crops). They also call for the expansion of protected areas in the Llanos, and especially the designation of Important Bird Areas in the wetlands.

Striking the proper balance between economic development and environmental protection has always been one of the chief challenges facing conservation. Ultimately, unless current research can keep pace with economic ambitions and allow scientists to play a key role in constructing effective conservation policy, huge swaths of vulnerable natural habitat could quickly disappear under the shadow of sprawling oil palm plantations.