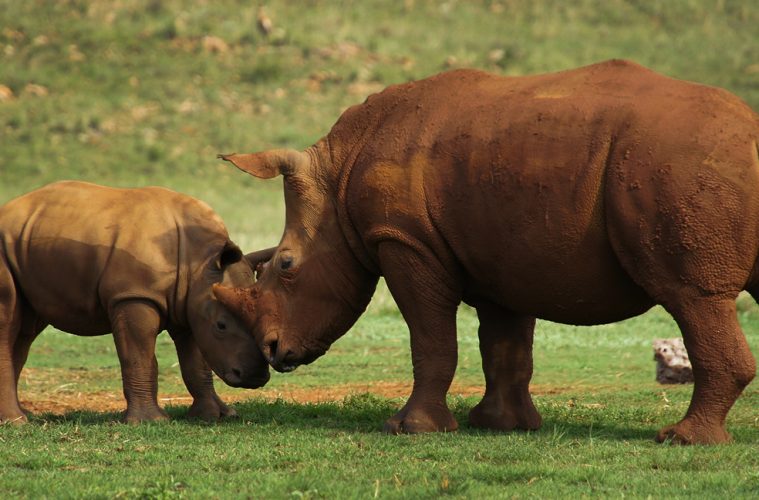 Legalising the Horn Trade Will Not Save Rhinos

Recent attempts to reduce the market value of rhino horn to disincentivise poaching will not prevent the approaching extinction of rhinos, a powerful new study shows.

Despite widespread conservation efforts, the ongoing poaching of African rhinos for their horn has shown no signs of stopping. In fact rhino poaching has increased by 52% each year since 2006, pushing both the black rhino and the white rhino ever closer to the edge of extinction.

The vast majority of this poaching takes place in South Africa, for two simple reasons: because that is where the majority of the continent’s entire rhino population resides and because successfully monitoring conservation areas there is virtually impossible due to their sheer enormity. To enforce anti-poaching laws in even one national park in South Africa requires patrolling a wildlife area the size of Wales! As a result, many areas are virtually open-access for poachers.

In the face of such a daunting challenge to halt aggressive poaching, there have been suggestions made over the years from various organisations and parties hoping to find a way to reduce the market price of rhino horn. Valued in many Asian nations for its supposed healing powers, rhino horn is staggeringly lucrative on the black market, and many have proposed that reducing its worth will decrease the temptation to poach. Various means to this end include the creation of synthetic rhino horn, regularly de-horning live rhinos, shocking the market with occasional offloads of stockpiled horn, or even legalising and attempting to closely monitor the rhino horn trade.

All of these strategies hold at their core the belief that lowering the economic value of rhino horn will remove incentive for poachers and ultimately result in fewer rhinos killed, yet this has only been speculative theorising—until now.

A newly-published study out of the University of Pretoria in South Africa by Dr Douglas Crookes has thoroughly examined the question if decreasing the value of rhino horn through any of these methods would actually have an effect on the prevalence of poaching. Dr Crookes has devoted years to understanding the economics of the rhino horn trade, and he most recently used cutting-edge System Dynamics Modelling to reveal how changes in the market price of rhino horn would affect the complicated and ongoing war between poachers and conservationists. What he discovered could revolutionise the continuing debate on what needs to be done if we are to prevent the irreversible loss of the rhinos and one of the biggest conservation failures of our time.

Poachers Profit at Any Price

In the past Dr Crookes has investigated whether increases in the price of rhino horn impact the level of international demand for the supposedly medicinal material, and found that so persistent and adamant is the market for rhino horn that price makes little difference to consumers. His most recent study has changed focus to the other side of the supply chain to ask if decreasing the price of rhino horn could convince some poachers to abandon their illegal career, yet Dr Crookes’ research revealed that poachers’ actions seem unaffected by the market value of the horn. He speculates that because illegal rhino hunting is relatively low-cost and low-risk, the endeavour will likely be profitable for poachers even if prices fluctuate.

While discussing this discouraging finding, Dr Crookes points out that even a rhino that has been “de-horned” will still have a couple of inches of stump remaining, and even that stump is on average worth around $6000 in today’s market. Even if its value were to fall to half of that, $3000 of rhino horn is still well worth the kill for a poacher. Similarly, Dr Crookes’ research indicates that other attempts to reduce the market value of rhino horn through the creation of synthetic rhino horn, releasing sporadic stockpiles of horn into the market, or attempting to tightly monitor a legal trade in rhino horn are all strategies likely to fail. Such approaches will not deter poachers, will not slow the loss of rhinos, and will not save these species from extinction. Not Enough Rangers to Go Around

This reality raises the question: how can poaching be made more costly to hunters, to the extent that they will give it up? Dr Crookes’ study examined this as well and predicted that increasing the probability that poachers will be caught and increasing the magnitude of the fines they consequently receive would drastically alter poacher behaviour, and cause many to rethink their life choices.

However, the same models also revealed that despite steady increases in the enforcement of anti-poaching laws in recent years, poaching itself has increased at the same time, and therefore an individual poacher is actually no more likely to be detected today than he was five years ago. This frustrating struggle simply to catch and punish poachers is likely the number one reason rhino populations are in critical condition.

“Our results show that poachers respond to levels of enforcement and the severity of the penalty, rather than policies that attempt to influence the price of rhino horn,” Dr Crookes explains. “On-the-ground management through patrolling and enforcement as well as levying a higher magnitude of fines are more effective than price reduction strategies. This finding is important, given the recent South African legal judgement to lift the ‘domestic’ trade ban, effectively giving poachers a de jure means to sell rhino horn.”

This new policy in South Africa is especially alarming since legal trade of rhino horn would not, as some proponents claim, help save the species; in fact, such a policy may very well harm conservation efforts. Multiple studies have found that a legitimate trade from which organisations may profit creates an incentive for wildlife management authorities to focus their efforts more on identifying legal vs. poached horn after the fact, in order to maximise the revenues from selling legal rhino horn, rather than dedicating all resources to intercepting poachers prior to the kill. This leads to wildlife management officials essentially “trading on extinction.” Revenue to the park and assumingly to its other conservation initiatives is boosted by the sale of legal horn—but only in the short-term, until the species is gone.

And the ultimate loss of rhinos, despite their charismatic status as one of the international symbols of conservation, may occur much more quickly than we realise. Dr Crookes’ research concurs with other studies that predict that rhino populations will disappear one by one and ultimately go extinct over the next 20 years if drastic action is not taken.

If we are to have any hope of sustaining rhino species for future generations to enjoy, we must acknowledge that we do not have the luxury of time. Conservation organisations and national governments simply cannot afford to waste precious time and resources on strategies that are unlikely to work. Policies or laws predicated on the assumption that reducing the financial value of rhino horn will reduce the rate of poaching cannot be a top priority when the situation for rhinos is this dire.

If we do not prioritise tighter law enforcement and physical protection of rhinos, first and foremost, then we may very well lose rhinos forever—and the financial value of an individual rhino horn will be a moot point.