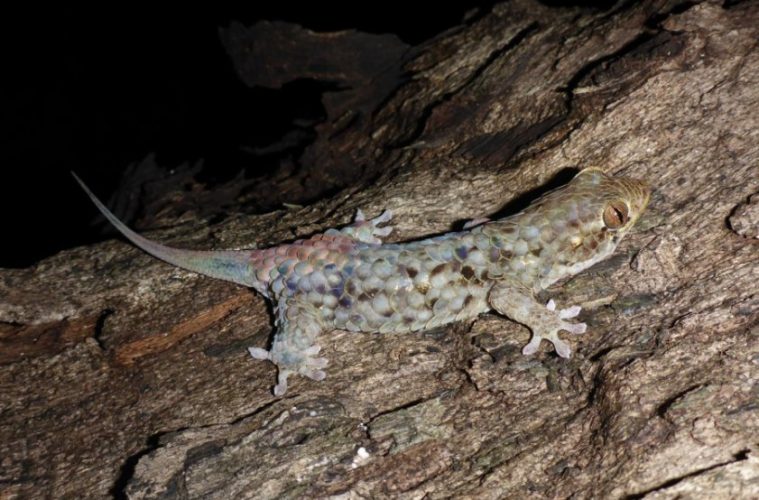 Geckos are famous for their ability to shed their tails to escape from the clutches of death. However, a newly discovered species of gecko takes it one step further by actively shedding its scales and baring all in a bid for freedom.

Geckolepis megalepis is a recently described species of fish scale gecko endemic to northern Madagasgar. Fish sale geckos are known for their large detachable scales, but this new species possesses the largest body scales of any known gecko. When touched, G. megalepis geckos can detatch their scales in an attempt to escape from predators and whilst this scale-shedding leaves them looking like a piece of raw chicken in the short-term, their scales will rapidly regrow in a matter of weeks.

“A study a few years ago showed that our understanding of the diversity of fish-scale geckos was totally inadequate,” says Mark D. Scherz, lead author of the new study and PhD student at the Ludwig Maximilian University of Munich and Zoologische Staatssammlung München, “it showed us that there were actually about thirteen highly distinct genetic lineages in this genus, and not just the three or four species we thought existed. One of the divergent lineages they identified was immediately obvious as a new species, because it had such massive scales. But to name it, we had to find additional reliable characteristics that distinguish it from the other species.” All Geckolepis geckos are also known to shed, or autotomize, their scales when touched or grapsed. The scales of Geckolepis can come off with very little provocation and they have historically been difficult to identify due to their habit of losing their scales when caught.

Scale patterns are often used to identify differences between reptile species, but Geckolepis geckos lose their scales so often that these patterns are too unreliable to use. Using micro-Computed Tomography (micro-CT), the researchers produced a detailed 3D image of the G. megalepis skeleton to show how it was distinct from other members of the Geckolepis genus.

In addition to their giant disposable scales, G. megalepis geckos also seem to have “tear-away” skin that is reslient to the loss of scales. The researchers believe that the geckos have adapted the ability to easily jettison their scales without leaving any permenent damage to the skin underneath.

“What’s really remarkable though is that these scales — which are really dense and may even be bony, and must be quite energetically costly to produce — and the skin beneath them tear away with such ease, and can be regenerated quickly and without a scar,” says Scherz. This amazing regenerative ability possessed by reptiles and amphibians is of great interest to scientists hoping to develop methods of regenerating human tissue for medical applications.