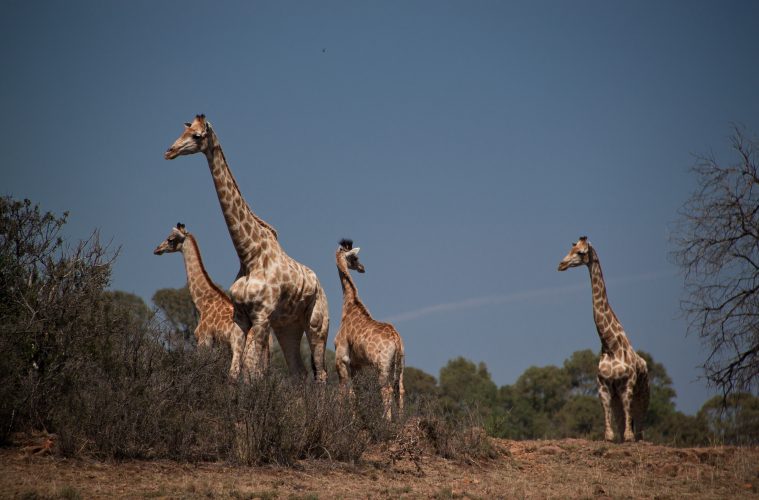 Loss of Trees Driving Giraffes to a Toxic Diet

The loss of tall trees due to human activity may be forcing giraffes to feed on toxic leaves, reducing their health and chances for survival; yet scientists hope the giraffe’s recent addition to the IUCN Red List will improve their future.

The year 2016 brought a victory for giraffes, even if the headline-grabbing news about them didn’t seem like it. In December the giraffe’s IUCN Red List status was changed from Least Concern to Vulnerable—one step closer to Threatened or Endangered. That may seem alarming, but scientists believe the listing is a positive first step towards recognising the challenges facing giraffes, addressing the reasons behind their decline, and ultimately safeguarding their future.

Yet before plans can be made to slow giraffe population declines, conservationists must first understand the causes behind it. Thanks to the intense work which the scientists at IUCN Species Survival Commission (Giraffe and Okapi Specialist Group) have done over the last five years, we’re starting to get a picture of what’s going on. Giraffes are sensitive creatures in many ways. On the surface they can be described as skittish, but look deeper into their biology, and they’re sensitive on a whole different magnitude. Giraffes are delicately and biologically susceptible to changes in their environment, making habitat loss their number one threat.

The key to this sensitivity is in their diet. Giraffes are browsers, meaning they primarily eat the leaves from trees, as opposed to grazing on grass or shorter vegetation. It makes sense that after 20 million years of evolution diverging from their short-necked ancestors that giraffes would have a preference for tall food; but their evolutionary tendency towards great height may be their short-coming. Acacia trees, along with giraffes, form part of the iconic landscape. Credit: Oliver Dodd CC BY 2.0

When a tall tree is dead, it can take many years to for a replacement to grow back to a size that is useful to a giraffe. Dr Francois Deacon is one of the lead authors on the IUCN giraffe report. In his words, “It’s quicker to lose a tree than it is to replace one.” Human activities such as building or agriculture remove tall trees from giraffe habitats, and desertification driven by climate change exacerbates the problem.

In their normal environment giraffes are careful browsers and leave only minimal damage. A giraffe will usually browse leaves from the top of a tree for a few minutes, and then will move onto the next, and then the next. Most of their day is spent wandering around trees, meticulously selecting their food. Yet when there aren’t enough trees to go around, their behaviour must change. Instead of sparingly eating a few leaves per tree, the hungry giraffe is forced to over-browse from the same tree. This behavioural change has consequences and studies conducted over the last 20 years tell a story of tannin toxicity.

Tannins are the bitter chemical that you taste when you’ve left the teabag in for too long. They’re found in many plants, including giraffe’s preferred foodstuffs, such as Acacia trees. Overbrowsing by giraffes activate the trees’ defense mechanism and prompt increased production of these tannins. It’s likely that giraffes usually avoid such bitter-tasting leaves, but they will eat them when they have no other choice.

Unfortunately tannins aren’t just bad-tasting; they can actually inhibit the giraffe’s ability to digest food. It’s a vicious circle—giraffes that are forced to overbrowse from the same trees must eat more to overcome their poor digestion, and the problem exacerbates. This leads to giraffes in poor condition, with weaker calves that are less likely to survive the hardships of growing up and more likely to succumb to lion predation.

As giraffes’ habitats have become smaller and more fragmented over the last 100 years, so too have their populations. These links between habitat, diet, behaviour and mortality are only just becoming evident. Behind the scenes, people like Francois Deacon are overcoming the obstacles of underfunding to push forward our understanding of these complex issues. The solutions have to be big, and long-term. With time, money and dedication, we have a chance to save these iconic animals from the annals of extinction.

Inducible defences in Acacia sieberiana in response to giraffe browsing