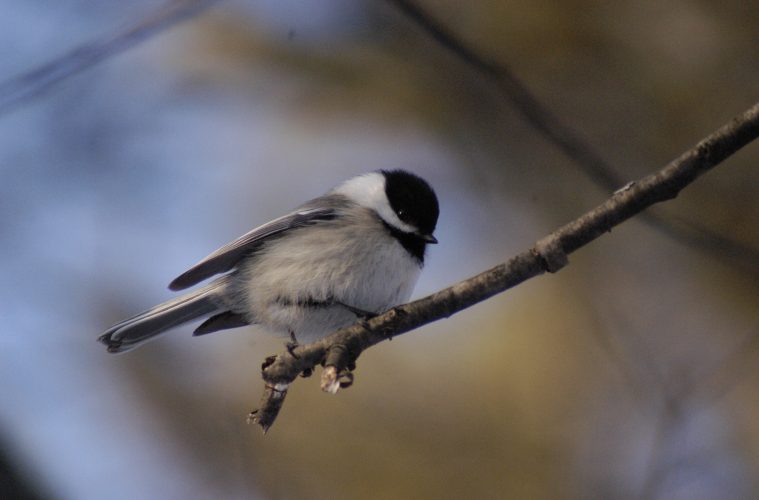 A recent study has found that chickadees from harsher environments are less flexible cognitively. They are initially good at acquiring and retaining information, but are not able to learn new information as well due to their stronger initial memories.

The ability to adapt behaviour is considered key to survival in changeable environments. An animal’s cognition – its ability to acquire, process, store and use information – can determine how good it is at being behaviourally flexible. For example, learning means an animal can adjust how they respond to an environment when it changes.

However, as ever in the animal world, there are trade offs to be made, and an advantageous behaviour in one environment might not be so critical in another. Researchers from the University of Nevada Reno wanted to understand these balances in mountain chickadees (Poecile gamble).

Chickadees are birds that cache food – hiding morsels in the Autumn and recovering them in the winter when food is scarce. Animals that cache food in this way are expected to have enhanced learning when it comes to spatial memory, meaning that they would be better able to remember where food they have stored is hidden. Previous work had shown that chickadees from higher altitudes, from a harsher, colder environment, have a higher reliance on their food stores and are better able to remember locations of hidden food.

The research group’s previous work had also shown that these enhanced abilities had led to associated parts of the brain becoming larger. As such, the researchers wanted to understand whether these specialised cacheing abilities led to a trade off with other advantageous behaviours – like cognitive plasticity.

Chickadees from both populations learned equally well which feeders they should go to in order to be fed. However, the researchers then changed the experiment. They assigned new feeders for each bird, to test their ability to learn a new location – to be flexible.

The researchers believe that the strong memories that the high altitude birds form about initially rewarding locations interfere with their ability to make new memories. As the chickadees from the harsher environment rely more on food stores in the winter, it is more important for them to have better initial memory acquisition and retention. Otherwise, they may risk forgetting where they have stored their food as it is replaced by newer memories.

It is therefore possible that a higher reliance on memory and having a large amount of things to remember – like cache locations – comes at the cost of cognitive flexibility. For chickadees at the highest altitudes, this is a trade off that they would likely be willing to make; Whilst cognitive flexibility has its advantages, the chickadee’s environment is harsh yet predictable. Therefore, having accurate and long lasting memory that keeps them finding food throughout the cold winter months could be a far more critical a skill.