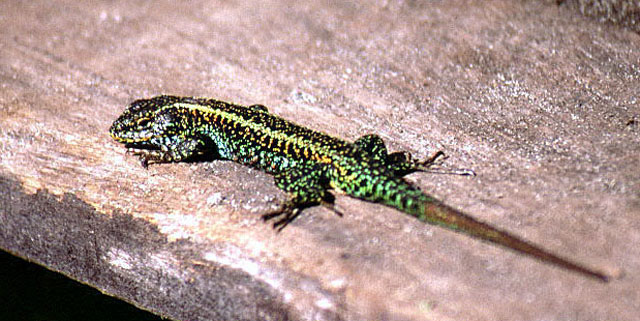 A recent study has found that thermal preferences in a wide-ranging lizard species are a result of behavioural changes, and that these preferences are more flexible than was previously believed.

Cold-blooded animals require heat from their environment to maintain a suitable internal temperature. If the environment’s temperature varies vastly, cold-blooded individuals need to be able to adapt to maintain a body temperature within the range suited to their needs. These adaptations can take the form of behavioural changes, such as moving to somewhere that is a different temperature. Logs and rocks offer warmer environments, for example, while shaded areas will be cooler. Alternatively, an individual can change the time of day, or even time of year, that they are active or the amount of time spent basking.

One such cold-blooded species is the painted tree iguana (Liolaemus pictus), which has an incredibly vast and highly variable range. L. pictus are particularly unusual in that they can adapt to living in rainy, cold forests–not generally a cold-blooded animal’s ideal habitat. These lizards can be found from central Chile to Northern Patagonia, from sea level to slopes of 1800 metres in elevation, and in starkly contrasting climates.

Recently, a team of researchers investigated L. pictus populations at both extremes of their range to examine how the behaviours and preferences of this species change when faced with different temperatures. The northern L. pictus populations are located in a mountainous, continuous forest habitat with dense tree cover interspersed with dry, open clearances where they experience high annual rainfall and an average annual temperature of 9-10˚C. By contrast, the southern populations live in low-lying bogs in a valley with wet clearances surrounded by forest, where rainfall is higher and the air temperature is 2-5˚C colder in the summer and spring than for the northern populations.

In fact, even southern-population females (which had higher measured body temperatures than all of the northern-population individuals) showed a preference in the lab for temperatures even higher still, suggesting that the heat-loving lizards of the south are constrained by their environment from thermoregulating as much as they’d like.

This higher preferred body temperature of the southern population may be the result of the shorter periods in which such individuals can be active, to compensate for the performance, growth, and reproduction lost during extended inactivity.

Females may have a higher body temperature in the field than males because of the need to speed up the development of offspring. Yet aquiring more heat requires more time spent basking, which is also time risking predation–which explains why male lizards are content with a slightly lower body temperature.

Lizards were also acclimatised at different temperatures in the laboratory in the first year. Half of each population was kept at 16˚C, the other half at 25˚C, mimicking the maximum mean temperatures of the environment. Those that were acclimatised at the colder temperature had a higher preferred body temperature and are reflective of the differences in the geographic variations. This suggests that it is not geographic origin that determines the lizards thermal preferences, but also changes of temperature of the environment that the lizard is in.

A cold-blooded species’ ability to adapt to temperature is key in surviving from increases in temperature, such as those that may occur due to global climate change. These findings suggest that preferences in both range and recent evolution are flexible. The variation in responses to different environmental conditions is as a result of behavioural changes rather than thermal preferences and suggests thermal preferences are variable and adaptive, not rigid–which is an encouraging sign for the future of species such as L. pictus and their ability to survive in a changing world.