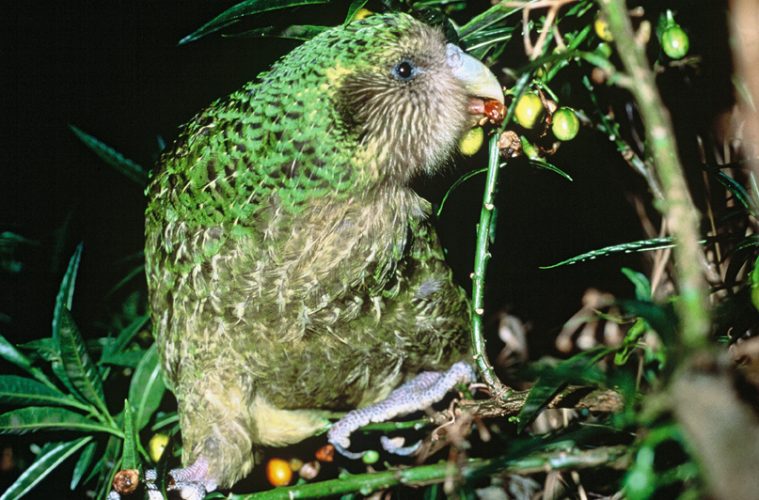 A recent study has found that European settlement of New Zealand was instrumental in the decline of the kakapo, an endemic species of flightless parrot. This finding uncovers information crucial to the future conservation of this critically endangered species.

Human colonisation of the islands of New Zealand occurred in two main waves: first by the Polynesians in 1280 AD, and then by European explorers in the 1800s. New Zealand is thought to be one of the most recently colonised landmasses and therefore the timing and impact of humans’ arrival in the area is relatively well documented, which is good news for scientists and historians working to unravel the factors that have contributed to the extinction or decline of native New Zealand species.

Biologists have always been keenly aware that endemic species (such as the kakapo) are found nowhere else on Earth and are therefore particularly vulnerable to extinction, yet identifying exactly how and why a certain species declined is not always straightforward. Various factors such as introduced predators, human consumption, or habitat alteration can all contribute in varying degrees to driving a particular species towards extinction.

As a result, the different effects of the Polynesian and European colonisations on the species of New Zealand are not always easy to untangle. In the case of the kakapo, as a flightless bird it was clearly at risk from the introduced mammalian predators that accompanied European settlement, yet it is also known that the Polynesians hunted kakapo for food and skins–so was the decline already well underway by the time the Europeans arrived?

To tease apart these contributing factors in the fall of the kakapo, a team of researchers recently analysed biological samples from historical kakapo preserved in museums and contrasted these samples with those from living kakapo. They chose individuals considered to be the founders of the current fledgling population of kakapos, and by analysing the DNA of individuals that lived in different time periods, the researchers were able to investigate the relative roles that Polynesian and European settlement played in the decline of the kakapo.

Upon comparison of the genetic results, the research team’s discovery was striking. They were able to ascertain that the kakapo likely had a stable and diverse population until the arrival of European colonisers despite harvest by the Polynesians, suggesting that it was the predation by ravenous rats and cats that was chiefly responsible for the rapid decline of the kakapo.

Understanding what factors have driven population decline in a species, and in particular the role humans have historically played, can greatly assist current conservationists and policymakers in the formation of management to conserve the species and not repeat the mistakes of the past. Yet the researchers point out that when asking these kind of questions it is especially crucial to study each species individually and not make assumptions or generalisations. For example, other New Zealand species such as the kea, kiwi, or takahe were impacted in different ways by the Polynesian and European colonisations. The kea is closely related to the kakapo and bears similar traits, yet studies suggest that human persecution actually had very little relative effect on the kea and that its current endangered status is the result of non-human factors.

The research team also confirmed, unsurprisingly, that genetic diversity is very low in the current kakapo population as a result of this near-extinction and that all kakapo alive today are alarmingly closely related–making them especially vulnerable to future threats. This result supports the ongoing use of genetic management in kakapo conservation to increase genetic diversity along with population size.

When faced with a critically endangered species–particularly one as rare as an island endemic–it can be easy for concerned conservationists to keep their gaze focused on the uncertain future, yet this study illustrates that we cannot forget to also cast an eye into the past. Knowing how and why a species reached its current condition (and to what extent humanity bears responsibility) can inform the policies of today. In the case of the kakapo, we now know they can tolerate low levels of human exploitation, but that the threat of nonnative mammalian predators is a persecution they simply cannot endure. Thankfully, New Zealand has made eliminating predatory nonnatives a high priority, and history may soon document the rise and recovery of the kakapo rather than its decline.