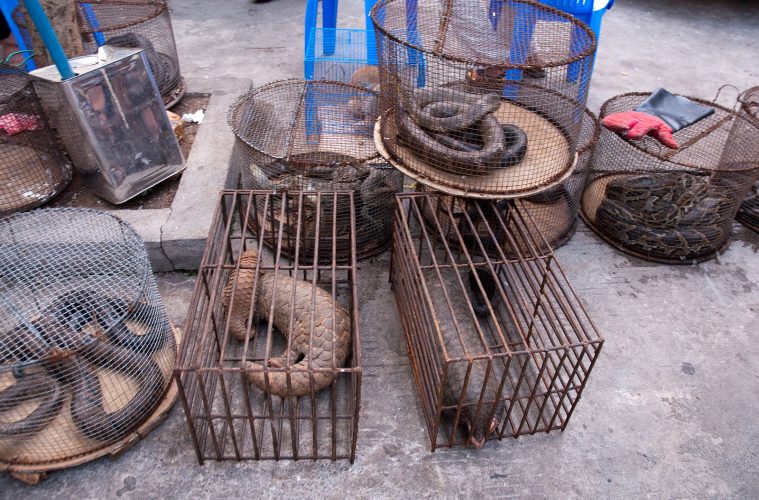 A shocking new statistic from the Convention on International Trade in Endangered Species of Flora and Fauna (CITES) reveals that 64,000 live wild animals were reported as confiscated between 2010 and 2014.  However, this sizeable figure may just be the tip of the iceberg as a recent study suggests just 30% of CITES members provided any information.

Poaching of species for the illegal wildlife trade is estimated to be worth between 8 and 10 billion dollars per year, and animal trafficking is the fourth most profitable black market industry in the world.  Transportation of wild animals and their derivatives is a huge business driven by criminal powers and is fuelled by consumer greed, status and superstition for alternative medicines. Captured, caged and trafficked with little regard for their welfare, animals live out their days in ghastly conditions. A staggering 43% of animals seized have experienced concerning welfare conditions.

CITES, formed of a network of officials from 182 countries, is the only global body responsible for protecting the world’s wildlife. Enforcement of the illegal wildlife trade can be incredibly difficult, with criminals employing a variety of tactics to conceal their stock. In order to keep-check on this huge operation, national authorities require in-depth information regarding the seizures.

But unfortunately, this information is not always provided.  A report released by the University of Oxford Wildlife Conservation Research Unit (WildCRU) and World Animal Protection, found that just 54 countries submitted information. Given that the wildlife trade is such a large and lucrative business, it’s perplexing that 70% of countries didn’t report any seizures.

With that in mind, one must assume that the real figure is much greater than 64,000. One worry is that the fate of wild animals, once confiscated, remains unknown. CITES members are not required to supply this information, so where the animal ends up is often a mystery.

With 19% of the 359 captured species currently considered ‘Threatened’ on the IUCN Red List – and animal welfare being a major concern – it is of paramount importance that captured animals are treated correctly. That means treating animals in a humane manner, while maximising their conservation potential.

“National authorities play a key role, facing some tough choices when they seize animals: whether they release them in the wild, place them in care in captivity or euthanise them,” said Dr Neil D’Cruze, lead researcher for the study.

Dr D’Cruze is concerned about the implications of  insufficient data recording and animal management. “There’s a real possibility that endangered species may be put back into the hands of the same criminals from whom they were taken,” he said. “We need to be able to account for these wild animals.”

The paper, published in Nature Conservation, emphasises the conservation value of  the ‘Threatened’ individuals. When a species is Critically Endangered, and their population is on the brink, the loss of a few members could push it over the edge. On the other hand, use of confiscated individuals in official release programmes could give the population the vital boost it needs to survive. On this basis, it is of course critical that Cites members carefully manage, and properly record, what happens to the animals they seize.

The findings and recommendations of this research were presented at the 17th meeting of the Conference of the Parties (CoP) in Johannesburg, South Africa on 27 September 2016 during a side-event focused on the confiscation of live wild animals organised by the Species Survival Network (SSN).