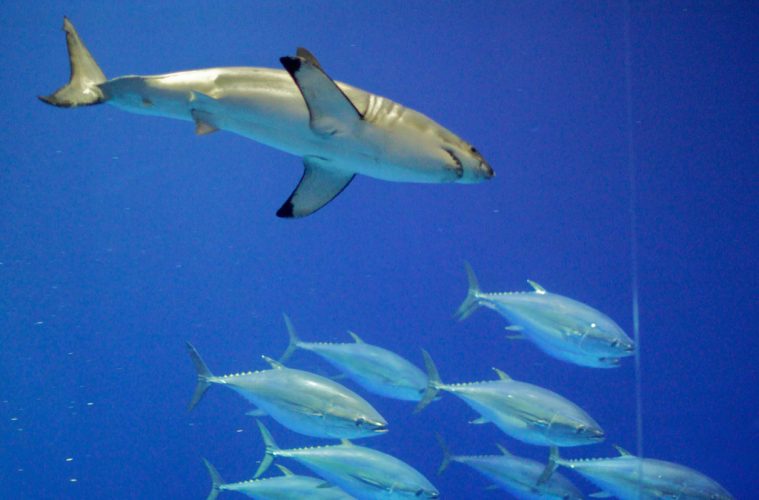 A need for speed and a fast metabolism are just two routes to becoming a super predator. Great white sharks and tuna, though obviously different, appear to share genes for a fast pace and impressive metabolism despite evolving independently, according to new research.

The two species began to evolve separately around 400 million years ago. Despite their distant relationship, scientists at Imperial College London have found both tuna and the laming sharks (including great whites) share a number of genes linked to predatory traits. The genes have been advantageous to both groups as they provide a great advantage when hunting.

“Lamnid sharks and tuna both have stiff bodies and tails that allow them to swim in bursts,” explained Professor Vincent Savolainen, one of the authors of the study. “They can also keep their temperature up in colder waters. Both of these things make them more effective predators, allowing them to snatch prey in usually inhospitable waters.”

One particular gene which codes for high metabolism, which allows the fish to keep warm and produce intense bursts of energy, was found to be identical in the two groups. This particular finding has the potential to help biologists further understand the relationship between genes and physical attributes.

“These are simple traits, and ones that have evolved twice. They give us a great point to start really examining the underlying genetics and understanding the relationship to physical traits,” said Savolainen.

Genes can be expressed differently in different animals, and a number of genes can contribute to one trait. Matching a gene to a trait can be tricky, so comparing the same genes and attributes between species can give a clearer picture of which features a gene affects.

During the experiment, the researchers took tissue samples from three different shark species and six species of tuna. They also took samples from species of mackerel, as these are similar to tuna. The tissue samples were then analysed to see which genes were expressed. The scientists found similar genes for metabolism in both the tuna and the shark species, but not in the mackerel.

The findings suggest that genes for metabolism and speed have evolved independently in both lamnid sharks and tuna, giving them a predatory edge over species like mackerel. This discovery will provide scientists with further insight into how genes evolve, and how they interact with the unique traits that they produce.

Adam G. Ciezarek et al. Substitutions in the glycogenin-1 gene are associated with the evolution of endothermy in sharks and tunas, Genome Biology and Evolution (2016). DOI: 10.1093/gbe/evw211