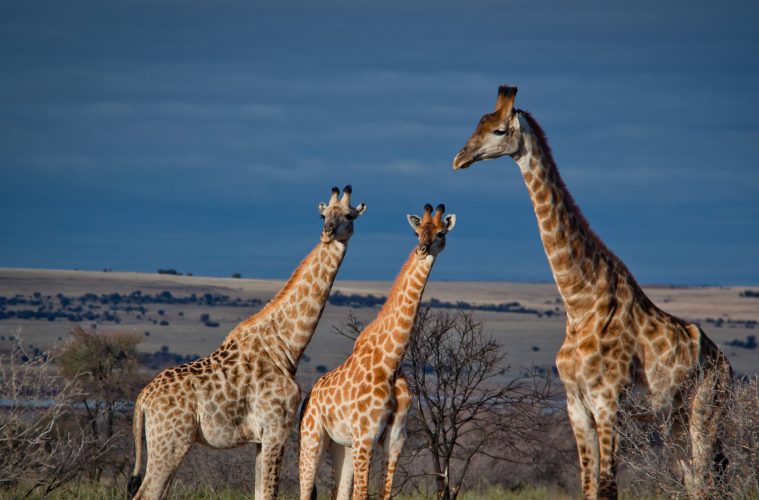 Giraffes’ genetic diversity suggests not one, but four species (for now)

Giraffes are going through an existential crisis – and in more ways than one. The meaning of what it is to be Giraffa camelopardalis is changing. A recent study has suggested something major – there may be four separate giraffe species, not just one, and some of them may be at risk.

If you were to drive across the African continent, you’d notice that the giraffes vary in their appearance, depending on where you are. Look at a giraffe in Kenya, chances are it will look quite different from a giraffe in South Sudan. The differing coat patterns of giraffes have historically been used to organise them into a number of subspecies; by modern accounts there are nine of them. But this method of categorising giraffes only goes skin deep. In the wild, giraffes are extremely picky about who they mate with. Despite overlapping territories, the different types of giraffe will not choose to mate with each other; they are reproductively isolated. When groups of similar animals become isolated from each other, they will evolve independently, and in time they become less and less alike. The study in question has highlighted the scope of the differences that exist today between giraffes, by looking in detail at their genome.

What is a species?

A confusing biological and philosophical question is: ‘what is a species?’ Biologists have been debating this topic for a long time, without consensus. Generally speaking though, a species is a collection of organisms that share a common ancestry, evolve independently from other organisms, and pairs of the group can produce fertile offspring. Sound familiar? This already sounds like a description of the various giraffe populations. Julian Fennessy and his colleagues were curious to see whether giraffes truly are one species, or if there is enough genetic distinction between the groups to warrant reclassification into multiple species.

Over six years, they took skin samples from 141 wild giraffes, using biopsy needles fired from a dart gun. To a giraffe, this is similar to an annoying insect bite. They managed to include giraffes from all nine accepted subspecies in their genetic survey.

After the tricky process of extracting the delicate nuclear DNA from their tissue samples, parts of the genome were compared between the individual giraffes, and with the genomes of more distantly related animals. From this, Fennessy and his colleagues could make an educated measure of how much genetic variation and organisation exists amongst giraffes.

This is how they found that there is not one, nor two, but perhaps four distinct giraffe species. One in the south, one north, and two in between. These are groups which have been genetically isolated from one another for around two million years. Or put another way, it’s been around two million years since they diverged from their last shared ancestor.

This study forms part of a growing body of evidence that giraffes are not just one species. In 1904, the zoologist Richard Lydekker proposed that giraffes should be recognised as two separate species. More recently in 2007, a study of giraffes’ mitochondrial DNA similarly recognised their genetic diversity and division. But mitochondrial DNA only tells part of the story, and this analysis of DNA from the cell nucleus has been key in moving this story along.

Does it really matter how many species of giraffe there are? Well, yes, it could be really important for the survival of giraffes. The concept of a species has the power to influence conservation policy.

The fragmented homesteads of today’s wild giraffes are just a vestige of their historical range, and giraffe numbers are crashing. Over the late 90s and early 2000s, total giraffe numbers dropped by a worrying 40%. Unlike elephants and rhinos, the chief enemy of giraffes aren’t poachers, or the international trade in animal parts; it’s habitat loss, which is even more difficult to police and fund-raise for.

In light of the mounting evidence, we find we need to preserve multiple giraffe species, not just one. This means that conservation policies should be formed independently for each species, and means we can recognise just how vulnerable each one is to extinction with the different factors they face in their separate environments.

Giraffes have been going through a ‘silent extinction’, where individuals have been disappearing from distinct species groups whilst they were all lumped together as one, so the loss didn’t seem as drastic. But now, instead of there being around 80-90,000 individuals of one giraffe species left, this is fragmented, leaving just 4,550 left in the case of the Northern giraffe (Giraffa camelopardalis).

This study provides an evidence-based incentive for governments and conservation organisations to quickly provide measures to protect these tall giants of the African continent. Can you imagine a world without giraffes?