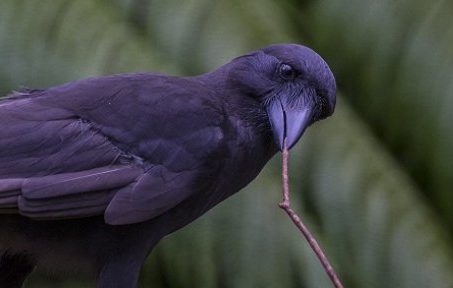 Crows, ravens and other members of the ‘corvid’ family are renowned for their intelligence and problem solving abilities. Now, the critically endangered Hawaiian crow has been found to be no exception. A recent study published in Nature has revealed that the Hawaiian crow, or Alalā, uses sticks to dig out difficult items of food from hard-to-reach crevices.

Many species of corvids live in remote tropical locations and their behaviour in the wild remains a mystery. “This raises the intriguing possibility that there are some undiscovered tool users out there,” explains the study’s lead scientist, Dr Christian Rutz, from the University of St Andrews, UK.

Previous research into birds’ use of tools has largely focused on New Caledonian crows, renowned for their quick, adaptive learning and use of foraging tools. “We had previously noticed that New Caledonian crows have unusually straight bills, and wondered whether this may be an adaptation for holding tools, similar to humans’ opposable thumb,” says Rutz.

Rutz soon identified similar traits in the Hawaiian crow, despite the two species being very distantly related. “With their last common ancestor living around 11 million years ago, it seems safe to assume that their tool-using skills arose independently,” explains Rutz. “It is striking that both species evolved on remote tropical islands in the Pacific Ocean that lack woodpeckers and ferocious bird predators — perfect conditions, apparently, for smart crows to become accomplished tool users!”

Unfortunately, years of as habitat loss, human persecution and the introduction of deadly diseases have left this crow extinct in the wild. The remaining living birds are currently housed in captive breeding facilities operated by San Diego Zoo with the intention of re-introducing the species throughout Hawaii.

“Later this year, in collaboration with our partners, we will be releasing captive-reared Alalā on Hawaii Island, to re-establish a wild population,” says Bryce Masuda, co-leader of the study and Conservation Program Manager of San Diego Zoo Global’s Hawaii Endangered Bird Conservation Program.

After a few initial observations of crows using sticks to reach food at the breeding facilities, the St Andrews and San Diego teams began a collaborative project to examine the tool-use employed by these birds under experimental conditions.

“We tested 104 of the 109 Alalā alive at the time, and found that the vast majority of them spontaneously used tools,” says Masuda, suggesting that this was more than just quirky behavioural traits of a few individuals.

“Using tools comes naturally to Alalā. These birds had no specific training prior to our study, yet most of them were incredibly skilled at handling stick tools, and even swiftly extracted bait from demanding tasks. In many regards, the Alalā is very similar to the New Caledonian crow, which my team has been studying for over 10 years,” added Rutz.

As well as providing fascinating insights into the world of avian cognition, this study has already proved to be a boon to the Hawaiian crow recovery programme.

“This is a wonderful example of how scientific research can contribute to conservation efforts,” explains Douglas Myers, President and Chief Executive Officer of San Diego Zoo Global. “The discovery that Alalā naturally use tools is of great significance, especially at this critical stage of our recovery efforts, as it provides completely unexpected insights into the species’ ecological needs. After more than 20 years of hard work, we are finally ready to release birds. I am confident we will manage to bring this iconic Hawaiian bird species back from the brink of extinction.”

In 1964, Dr Jane Goodall first identified the use of tools by chimpanzees in a groundbreaking paper released in Nature. 50 years later, Goodall is still excited by these new findings: “I love learning about the discovery of tool use behaviours in other species of animals,” she said. “This latest finding is especially wonderful. Each of these discoveries shows how much there is still to learn about animal behaviour, and it makes me re-think about the evolution of tool use in our own earliest ancestors.”

However, she also shows how the Hawaiian crow is a stark reminder of the perils faced by wild populations in modern times: “Let this discovery serve to emphasise the importance to conserving these and other animal species so that we can continue to learn ever more about the range of their behaviour before they vanish for ever in the 6th great wave of extinction. We owe it to future generations.”

Watch below to see the Hawaiian crow’s use of tools in action!