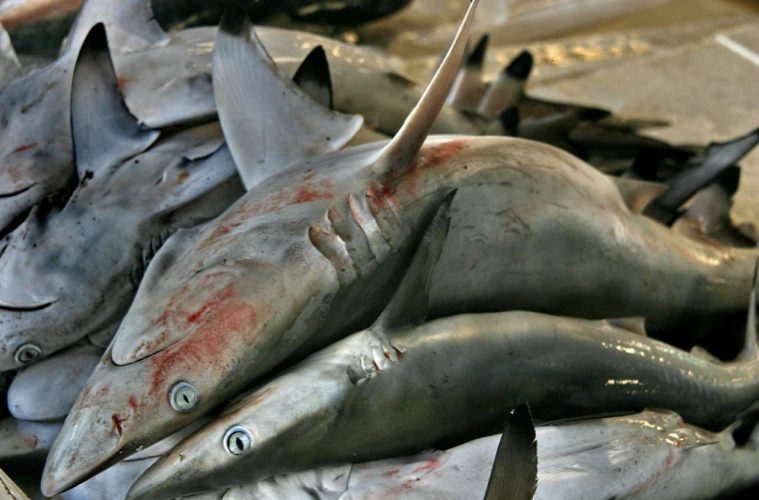 Blood spilled in the Red Sea

Rampant overfishing has decimated shark populations in the eastern Red Sea. A new study shines a spotlight on the many shark species struggling to survive the slaughter and urgently calls for immediate conservation action before it is too late.

In every ocean and sea across the globe sharks and rays are combating the enduring threats of fisheries and shark-finning, but there are a few places where life as a shark is particularly fraught with danger. The Red Sea is one such place, identified by scientists as an area where sharks are frighteningly at risk of extinction if swift and effective management is not put in place.

In Saudi Arabia, on the eastern side of the Red Sea, shark-fishing has been illegal by royal decree since 2008—but only in principle. In reality the fishing carries on uncontrolled and unabashed, accompanied by poacher fishers from nearby Yemen. Yet Saudi Arabia is not unique in their inability or unwillingness to enforce fishery management; unbridled overfishing of sharks is common practice for many countries bordering the Red Sea, and all of these fishing fleets voraciously taking from a shared population of heavily persecuted sharks is a recipe for disaster.

Despite the fact that the shark-fishery of the Red Sea is insatiable, crosses country borders, and is essentially unregulated, there is a disturbing lack of data of any kind on the populations of the shark species involved. No one really knows the history of the Red Sea sharks—how many there once were, how aggressively they’ve been fished in the past, how quickly they’ve been reduced to their current level. In fact until recently it was anyone’s guess what the current population status of the Red Sea shark species even is. But a newly-published study finally shines some light on this staggering gap in knowledge—and reveals even more starkly than ever the extent of the shark slaughter in the Red Sea.

A team of scientists from the Red Sea Research Center set out to establish the first real baseline data on the abundance of sharks remaining in the eastern Red Sea today, and then endeavoured to compare their results with more peaceful reefs where sharks aren’t nearly as heavily fished. The researchers chose to focus predominantly on the Saudi Arabian coastline since other areas of the Red Sea do in fact have a few Marine Protected Areas (MPA) and considerably better fishery management. In contrast, the eastern Red Sea is where sharks are at the most risk of being fished into oblivion and therefore it is the area of greatest conservation concern.

To get a good look at just how many sharks are left, the team employment Baited Remote Underwater Video Systems (BRUVs) 114 times over the course of two years of study. Hours and hours of recorded video revealed the occasional whitetip reef shark or zebra shark gliding by, drawn in by the tuna bait, while the team also deployed 32 baited longlines that hooked a few silky sharks and scalloped hammerheads (all of which were promptly released, healthy and alive). At the end of the two years when the results were all added up and counted, the research team had seen or hooked only 53 individual sharks and 10 individual batoids (rays or skates), representing seven shark species and four species of skate or ray. Grey reef sharks are among the species found in the eastern Red Sea where shark fishing is extensive. © NOAA/Flickr

The researchers used these years of data to calculate their Catch Per Unit Effort (CPUE), a measurement of relative abundance commonly used by fisheries scientists, so they could compare their results with the CPUE of sharks in less heavily exploited reefs both inside and outside of the Red Sea and gain some understanding of the shark population the eastern Red Sea should support and how reduced today’s populations are by comparison.

When the team compared their data to the CPUE of sharks in healthier reefs in Hawaii or Belize, they reported that, “Overall, BRUVs and longline CPUE estimates for sharks at SA Red Sea reef systems were between 10 and 94 times lower than CPUE estimate of both unfished and fished reef systems outside the Red Sea.”—a worrying sign that sharks in the eastern Red Sea are becoming exceptionally scarce and therefore several orders of magnitude more difficult to find.

In their discussion of these ominous numbers, the researchers emphasised that the populations of shark species in the eastern Red Sea have become “alarmingly low” and added that they believe they may have even overestimated the sharks’ abundance. Unfortunately there is no way of knowing precisely how many sharks once swam the Saudi Arabian coastline before human exploitation, but as the scientists point out, the few areas of the Red Sea that have been mostly protected from heavy fishing still have healthy shark populations—dispelling the idea that the Red Sea may have a naturally low shark population anyway.

In theory the eastern Red Sea reefs should be teeming with sharks just as much as comparative reefs in the Caribbean or Pacific, and so their startling scarcity is most definitely a consequence of the actions of humanity. Plus, the poor fishery management of Saudi Arabia and nearby nations is not limited to sharks, and the over-exploitation and subsequent depletion of the fish species sharks prey upon may also be making life difficult for them—a reminder that overfishing impacts the entire ecosystem, not just the species in question.

The results of this study underline quite clearly that out-of-control sharkfishing in the eastern Red Sea has killed enormous portions of the population and pushed many shark species dangerously close to the looming threat of extinction. The scientists themselves are keenly aware of the urgency of the situation and have stated, “We believe that, at this point, only a strict and immediate moratorium on shark fishing will have the potential to secure a future for sharks roaming SA Red Sea reefs.”

In addition to actually enforcing the current sharkfishing ban or passing a moratorium with more political teeth, policymakers of the area may wish to consider enacting and enforcing general MPAs. Perhaps they could attempt to imitate the reefs off of Sudan, which have been shown to be ecologically similar to Saudi Arabian reefs yet much more effectively managed. Yet it is undeniable at this point that without a practical and enforceable conservation strategy of some kind, the future for sharks in Saudi Arabia’s waters appears very bleak indeed.