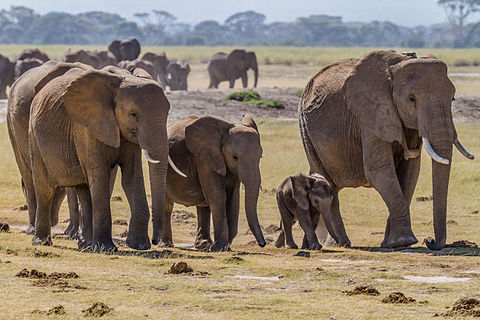 The findings of a new study confirm worries of severe declines in elephant numbers, with populations dropping by 8% each year, thanks in large part, to poaching.

The survey is the first of its kind as it used standardised data collection and validation methods. It is the result of 3 years of work, $7 million, and the collaboration of 90 scientists. Scientists worked together with game park biologists, game wardens and rangers to determine elephant numbers. The project also involved the work of many organisations, including Elephants Without Boarders, the Wildlife Conservation Society, Frankfurt Zoological Society and African Parks Network.

The results of the study, known as the Great Elephant Census (GEC), suggest that there are approximately 352,271 savannah elephants across the continent. This number represents at least 93% of the elephants surviving in those countries. In 15 of the 18 countries surveyed, elephant numbers dropped by 30% between 2007 and 2014, showing the severity of the decline.

Over 80% of the elephants were counted inside protected areas, with just 16% found in unprotected zones. However, although wildlife reserves aim to protect wildlife across Africa, large numbers of dead elephants were found within them. This suggests that elephants are not safe from the threat of poaching even when in legally protected zones. High amounts of poaching and demands from the ivory trade see savannah elephants lost from areas of Africa where they once thrived.

However, the results of the survey will be of use to conservations, as they can act as a baseline for any future population studies. The research team used modern counting techniques and up-to-date statistical methods to ensure accurate results regarding the distribution and number of Savannah elephants across the 18 countries surveyed.

“This project required a Herculean effort on the part of many partners since its launch in December 2013, with 81 airplanes and 286 crew members flying roughly 463,000 kilometres to complete the survey,” said Vulcan wildlife conservation director James Deutsch.

Although the findings already incorporate 18 different countries, there are still a couple of countries still to be analysed. South Sudan and the Central African Republic will hopefully be studied by the end of 2016, although this is dependant on safety conditions.

So far, this study has clearly shown that something must be done to prevent further declines of the savannah elephant. The Principle Investigator of the Great Survey, Dr Michael Chase, highlighted this need, saying, “the results of the GEC show the necessity of action to end the African elephants’ downward trajectory by preventing poaching and protecting habitat.”