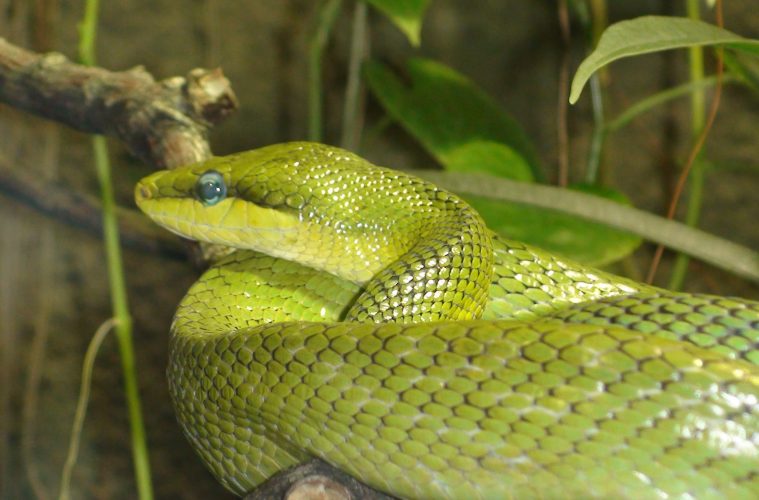 What do snakes see?

Some snakes hunt by day, some by night. The eyes of these diurnal and nocturnal hunters have adapted to the visual challenges each lifestyle faces, and ultraviolet (UV) light plays an important part.

Whilst snake eye anatomy has been well studied for many years, recent techniques to understand vertebrate vision has focused on mammals, birds and fish. An international team of researchers have now used gene coding to study what a snake sees, in total analysing 69 species of the reptile.

The aim was to gain further understanding into the evolution of colour vision. Eyes are complex and diverse, even within snake species. Their eyes contain cells called rods and cones, which in turn contain receptor proteins that react to light, known as opsins. Cones are responsible for colour vision; the way in which the opsins in cones react to light are what allows the perception of different colours

In addition to their colour vision, many snakes have developed a sensitivity to UV light, allowing them to see in low light conditions. This adaptation was found in the majority of snakes analysed in the study.

Species that are active in the day have a further adaptation that helps them to see more accurately in sunlight. Before light reaches the retina it passes through the lens, and in daylight-hunting snakes the lens has a built-in UV filter. Almost like a pair of sunglasses, the lens filters out some of the UV light and enables the snake to see a sharper image. Interestingly, the alteration to the lens that allows the filtering of UV and blue light also makes the lenses appear yellow, this is why some snakes appear to have yellow eyes! In contrast, the species that are nocturnal hunters had no UV filter, boosting their ability to see and hunt in the dark of night.

The scientists involved believe that the most recent ancestor of all living snakes had UV sensitive vision. “The precise nature of the ancestral snake is contentious, but the evidence from vision is consistent with the idea that it was adapted to living in low light conditions on land,” said corresponding author David Gower.