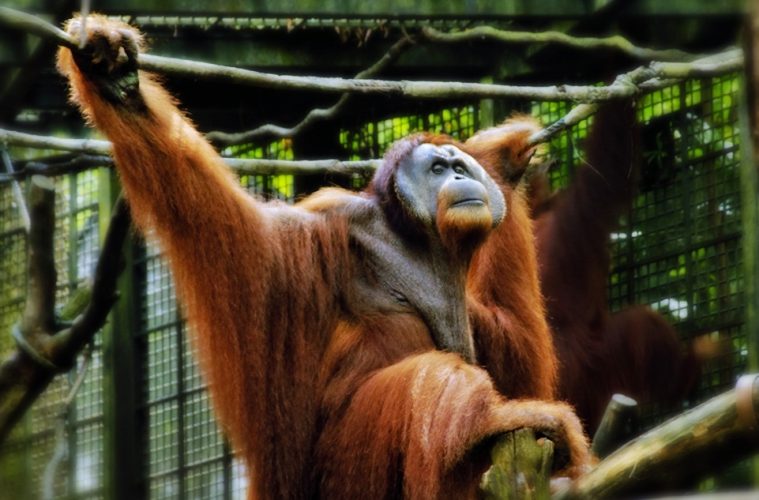 I Wanna Talk Like You – Rocky the orang-utan imitates sounds

A new study led by researchers at Durham University has discovered key information in understanding how complex speech in humans has evolved. By playing an imitation game with an orang-utan called Rocky, they have found that he can copy the pitch and tone of sounds made by the researchers. This shows that orangutans have the ability to control their voices (known as vocal fold control), something that great apes were previously thought to be incapable of doing. This could give us an idea of when speech started to evolve in our ancestors.

Speech as a learned behaviour

Speech is considered to be a learned behaviour; this means that in order to be able to produce full speech you need to be able to learn new sounds and replicate them, a factor that is important to the development of spoken languages.

This method of learning new sounds was a skill that we thought our closest relatives, the great apes, could not perform. It was believed that great apes only produced sounds because of a driven compulsion to do so, rather than because new ones were learned. It was therefore assumed that speech could not have originated in the ancestors we share with great apes, and instead evolved in later human ancestors. But the study of Rocky seems to have overturned this idea by demonstrating his ability to control his voice.

Rocky is an 8-year-old orangutan who lives in Indianapolis Zoo, USA. The researchers made random sounds that varied in either pitch or tone and Rocky mimicked them each time. The sounds were then checked against a database of orangutan calls which contained sounds from over 120 orangutans from 15 populations, both captive and wild. This database allowed them to conclude that the sounds Rocky had imitated were different to those orangutans normally produce, and they were new sounds Rocky had learned. In direct contrast to previous beliefs, Rocky had been able to make vowel-like calls and control the action of his voice.

The evolution of speech

This research has given a new view on the evolution of speech and the vocal system in early human ancestors. It is possible that a shared ancestor between humans and orang-utans or other great apes had some form of speech, which has led to orang-utans and humans being able to learn new sounds.

“Our latest findings open up the potential for us to learn more about the vocal capacities of early hominids that lived before the split between orangutan and human lineages,” said lead author Dr. Lameira.

This kind of research can also help expand our knowledge of communication in the orangutan species itself as well as great apes in general, as the ability to control its voice means that new calls could be learned, expanding their range of sounds. It’s worth noting that this is just one orang-utan, and it will be exciting to see whether these vocal abilities are found in more individuals and more species as the research goes on.