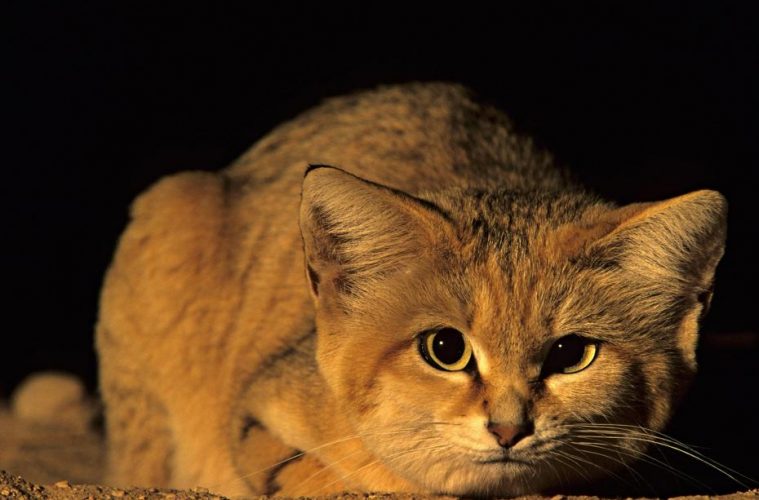 A decade long game of hide and seek between researchers and a particularly elusive feline has finally come to an end in the deserts west of Abu Dhabi. After ten years, the Arabian sand cat (Felis margarita harrisoni) has finally been caught on camera.

These unique images were captured using baited camera traps. Not unlike domestic kitties it seems sand cats have a favourite aroma, and the bait of preference was chicken flavoured cat food! Between March and December 2015, 46 photos of sand cats were captured in the 1,990 square metre recording area. From the photos, researchers were able to distinguish three individual sand cats using their unique markings – one male and two females.  Amongst the assortment of exotic wildlife also photographed by the camera traps were several prey species. This has led researchers to believe that there are plenty of opportunities for sand cats to feed in the area.

Sand cats feed primarily on rodents and don’t drink water; they manage to absorb all of the liquid they need from their prey. A predominantly nocturnal feline, the cat can survive in scorching temperatures of up to 52°C. They have a wide distribution across the desert regions of North Africa, Arabia and Central Asia. Sadly they are considered Endangered in Middle Eastern countries and Near Threatened” in Africa on the IUCN red list for endangered species.

There are still very few scientists working on the conservation of the Arabian sand cat. Shakeel Ahmed, an assistant scientist on this project, hopes these photos will help to generate a better impression of the wild population. This will ensure any protected areas which are formed will be adequate. In an interview with New Scientist, John Newby of the Sahara Conservation Fund has expressed concerns about the minimal number of assessments made of the behaviour, population and status of the species. Though he describes the sand cat as “naturally rare” it is clear he believes this field work could form a useful springboard for more scientists to study this mysterious cat.

The population of sand cats is thought to be declining in the wild, and the largest captive population is 33 cats. This captive group is housed at Al Ain Zoo and the head of conservation there, Hessa Al Qahtabi, hopes that the new photographs and identification of three individuals will help to give a more accurate population estimate. This will of course be essential in determining the requirements of any protected area which could be established in the future.

With such an interesting life history, and a pretty decent dose of cute and cuddly, it’s difficult to see why these cats don’t attract more attention from scientists or the media. Hopefully these photographs will inspire new motivation into research to preserve this species for future generations.