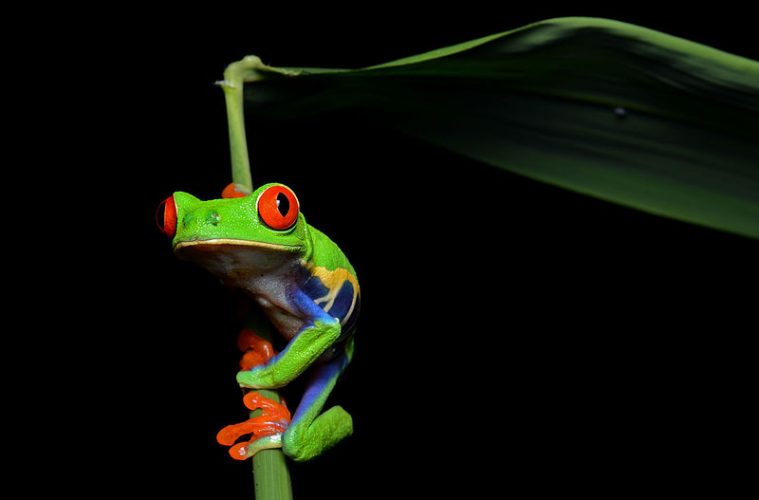 Why do some male frogs prefer lovemaking on land?

Frogs are no strangers to making love where and when it is needed in order to survive, be it in water, in trees, or even on land. New research has highlighted how some male frogs make the move away from puddles and pools, and instead mate on land to increase their reproductive success.

The reproductive methods of frogs are incredibly diverse. Over 40 strategies are known so far, and more still being discovered. Some frogs lay eggs in the water and move them onto land, others carry offspring on their backs as they develop, while others even skip the tadpole stage entirely.

A team of Cornell University amphibian biologists have recently shown for the first time how and why another strategy is used. Some frogs have adapted to hide eggs on land, in order to keep them protected from other males who want to fertilise them. These frogs have been found to construct hidden chambers out of leaves, a place of their own from which to call out to prospective partners.

It was assumed that natural selection drove some frogs to reproduce on land, a way of keeping their eggs and tadpoles safe from aquatic predators. But there may be more to this adaptation.

“We thought maybe it’s not just natural selection driving the adaptation to reproduce on land, maybe this is actually sexual selection,” said Kelly Zamudio, the Goldwin Smith Professor of Ecology and Evolutionary Biology and the paper’s lead author.

“It’s not only [the males] competing but it’s their sperm competing. If you have larger testes, you can produce more sperm and can fertilise more eggs,” Zamudio said.

These frogs making their move on land may be compensating for their choice of fertilisation, as those that fertilise eggs in the water have significantly larger testes than those who fertilise on land. “The males have smaller testes, [but] they don’t need to produce that much sperm because they are getting the eggs away from other males, and there is no competition,” said Cynthia Prado is a Sao Paulo State University Assistant Professor in Brazil.

Zamudio highlights the significance of these results to understanding frog species diversity and how it may shift through the current anthropogenic environmental pressures thrust upon them.

“More specialized reproduction modes, like the ones that are terrestrial, are less frequent, and typically, when species get threatened, because of climate change or habitat disturbance, the species that go first are the ones that are more specialised. They have requirements above and beyond just having a pond,”

The study was funded by the National Science Foundation, the São Paulo Research Foundation and a University of California Chancellor’s Postdoctoral Fellowship.