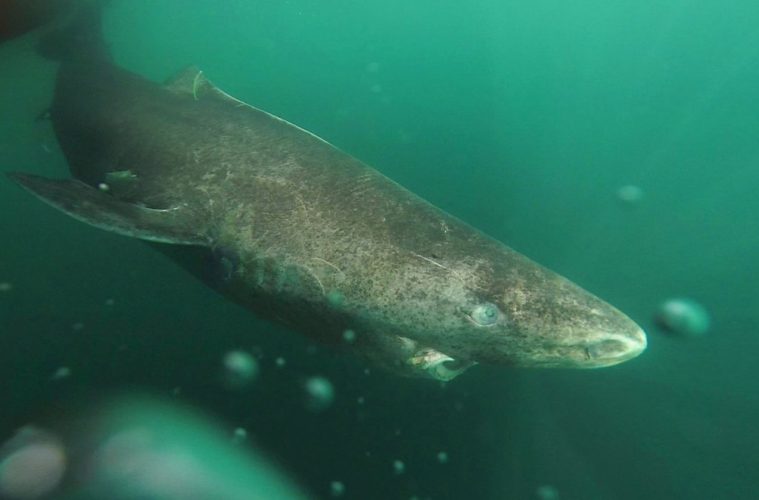 The enigmatic Greenland shark has puzzled scientists for years. Growing to over 5 meters long, it spends its days swimming in the cool waters of the North Atlantic and Arctic Oceans. However, new research, recently published in the prestigious journal Science, has revealed something truly amazing about the Greenland shark – it has a life expectancy of at least 272 years. This makes it the longest lived vertebrate ever recorded by science.

Biologists have speculated the lifespan of Greenland sharks for decades, as they are known to only grow by a few centimetres each year. However answering this question has always posed a problem. Greenland sharks cannot be aged in the same ways that most fish can be, making their lifespan a mystery – until now.

An international team of researchers, led by marine biologists from the University of Copenhagen, were able to determine the age of sharks by using a revolutionary new method.

“Our lifespan study is based on the carbon-14 dating of Greenland shark eye lenses,” explains Julius Nielsen, PhD student at the University of Copenhagen and the study’s lead author. “As with other vertebrates, the lenses consist of a unique type of metabolically inactive tissue. Because the centre of the lens does not change from the time of a shark’s birth, it allows the tissue’s chemical composition to reveal a shark’s age. We use well-established radiocarbon methods, but combine them in a new way. ”

Previously used to age whales, this technique has never before been tried with fish. The carbon-14 analyses were carried out by atmospheric physicists at Arhus University in Denmark, highlighting the benefits of interdisciplinary research. Jesper Olsen, one of the collaborators from Aarhus University said, “This study of the Greenland shark’s lifespan has been made possible due to the close cooperation between University of Copenhagen and Greenland Institute of Natural Resources biologists, with their knowledge of sharks, and Aarhus University researchers, with their carbon-14 dating expertise.”

Whilst the new finding is incredibly interesting scientifically, it could also bring good news for conservation. The Greenland shark is a unique, enigmatic species that must be preserved, but at present, many are fished accidentally. If caught they cannot easily be eaten, because their flesh contains a toxin that induces drunkenness, so their bodies simply go to waste. Nevertheless, there now is hope that a better understanding of their lifespans might lead to more sustainable management for Greenland sharks.

“Greenland sharks are among the largest carnivorous sharks on the planet, and their role as an apex predator in the Arctic ecosystem is totally overlooked,” says Nielsen, “By the thousands, they accidentally end up as by-catch across the North Atlantic and I hope that our studies can help to bring a greater focus on the Greenland shark in the future.”