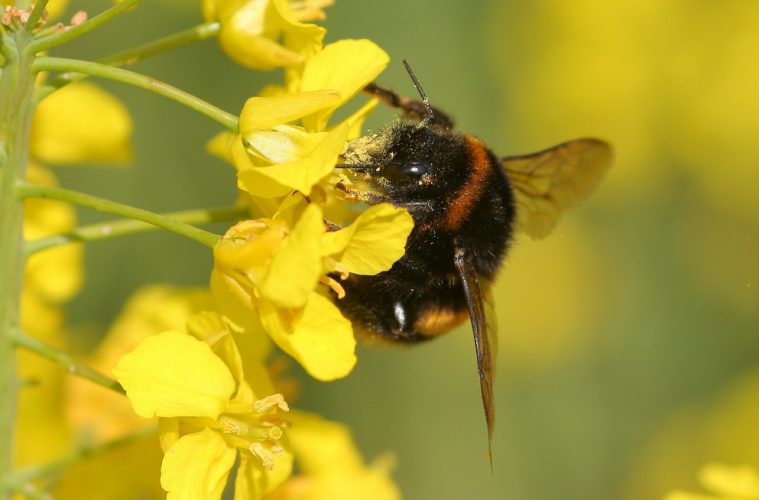 We owe an awful lot to our wild bees. As they buzz around our countryside diligently collecting nectar and pollen, they’re unknowingly providing essential ecosystem services by pollinating our crops. However, something is amiss in our ‘green and pleasant’ land. In a new, large-scale study published in Nature Communications, scientists uncovered more worrying links between bee declines and the use of neonicotinoid pesticides.

Since their introduction in the 1990s, neonicotonoid pesticides (commonly referred to as neonics) have remained a controversial subject. These systemic insecticides, which are taken up by the plant and transported to all tissues, contain toxins designed to act on the central nervous system of pests. Yet pests such as aphids are not the only insects affected.

Over the years, a number of studies have been been published about the effect of neonics, providing mounting evidence that they have sub-lethal, harmful impacts on bees. This includes drops in queen production, reproduction and colony growth rates. These findings even prompted the EU to  impose a 2-year moratorium on the use of neonics  in 2013.

Until now, neonicotinoid studies have largely been short term and have primarily focused on honeybees and bumblebees, leaving many wild bee species ignored. Now, in a large scale analysis known as a ‘multi-species dynamic Bayesian occupancy model’, scientists from the NERC Centre for Ecology and Hydrology studied the population change of 62 wild bee species in England over 18 years. Using data from over 31,000 surveys collected by skilled voluntary entomologists, the scientists were able to compare the populations of bees that forage on oil seed rape compared to those that don’t. Oilseed rape is a key crop for wild bees, covering a staggering 8.2 million ha in Europe.

The results were striking. On average, bees foraging on oilseed rape were three times more negatively affected by exposure to neonicotinoids than non-crop foragers. “As oilseed rape is the main crop treated with this pesticide that bees forage on in England we expected to find that they would show negative correlations with neonicotinoid use on it, but we were still surprised about the scale of the effect.” comments Ben Woodcock, a lead author of the study.

However, Woodcock emphasises that we can’t entirely blame neonicotinoids for bee declines. “For many species the effect of neonicotinoids is small, and it is likely that many other factors play important roles in their decline such as habitat loss, climate change and disease.”

It is crucial that all of these factors are taken into consideration when conserving bees. Many simple measures can make a big difference when giving bees a helping hand. Woodcock suggests a few ways in which farmers can help. “In agricultural landscapes the provision of non-crop flowering resources, such as flower rich field margins, or recreations of species-rich grasslands will play an important role in helping keep bees part of our world.”

Continued research on bee declines and neonicotinoids is also paramount to secure a safe future for wild bees and food security. Woodcock and his team are already undertaking another large scale study, funded by lead neonicotinoid suppliers, to determine the pesticides impact on honeybees and wild bees in the UK, Germany and Hungary.