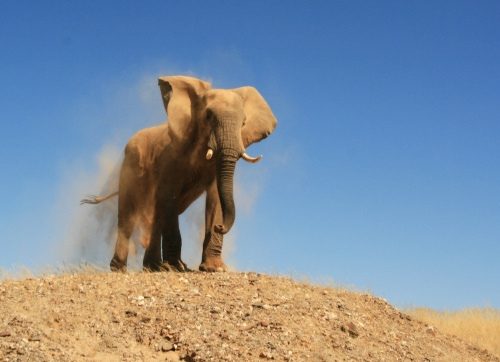 Namibian desert elephants look, and behave, a little differently to their other African cousins. Their special adaptations allow them live in the hot and hostile environment of the Namib Desert. Intriguingly, new research has shown that despite these differences, Namibian desert elephants are genetically similar to other elephants, suggesting that their survival skills are a result of shared knowledge and learning, not genetic predisposition.

Namib elephants have excellent memories, remembering the locations of food and water in their huge and featureless home ranges, areas much larger than those of elephants in other types of habitat. In times of need, Namib elephants also create their own water holes by digging down beneath the sand. This, along with paths created by the elephants, enhances the survival of other species in the desert too, providing them with a much needed drink.

The desert elephants have also come up with a novel way to keep cool in the intense heat. They cover their bodies with sand moistened by either urine, or water regurgitated from a specialised pouch hidden under their tongues.

The new study was published in the journal Ecology and Evolution, and analysed the DNA and mitochondrial DNA (mtDNA) of desert and non-desert elephants across Namibia. Desert elephants did not have significantly different DNA from other elephants, apart from those from the Caprivi Strip, which is more geographically segregated. Unsurprisingly, the elephants of the Caprivi Strip were more genetically similar to elephants from Botswana and Zimbabwe, the countries bordering it.

Comparing the genetic data with history, the researchers found that the limited genetic difference between elephants is connected to historical elephant movements that occurred during the 1966 to 1988 Namibian War of Independence, when hunting increased.

As well as hunting pressures, Namibian elephants might be genetically similar because of their long migrations and large home ranges. Gene flow between groups may also be a big factor, as wandering males breed with females from different areas.

Although not genetically different from most other African elephants, the conservation of Namib elephants is incredibly important. The next generation of elephants are unlikely to survive the unforgiving desert without vital knowledge gained from their predecessors. If desert elephants were lost, it is unlikely that other elephants could successfully move in and adapt to this new habitat, as they would lack the learned behaviour essential for desert survival.

“These elephants should be conserved,” explains Alfred Roca, the study’s lead author. “Their knowledge of how to live in the desert is crucial to the survival of future generations of elephants in the arid habitat, and pressure from hunting and climate change may only increase in the coming decades.”