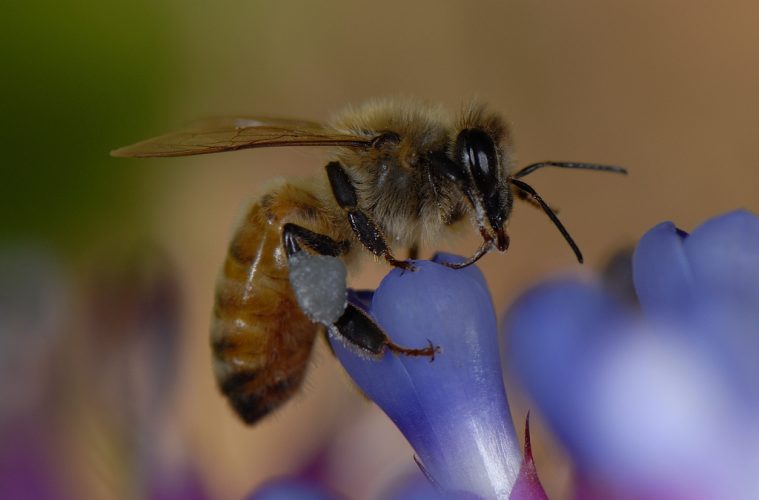 Insect pollinators, flitting from flower to flower in the sunshine, are for many people evocative of lazy, hazy summer days. But this tranquil scene masks a troubling truth: insect pollinators are in trouble.

Across the globe their populations are in decline, with up to 40% of invertebrate pollinator species facing extinction in some places. Some of the best-documented declines are occurring in bees. Now, researchers have identified one potential mechanism behind the worrying honeybee (Apis mellifera) decline: a contraceptive effect of insecticides on reproductive males.

“A vast body of evidence now suggests that numerous different wild and managed bee populations are in a decline, most likely due to multiple simultaneous pressures; such as invasive parasites, climate change, land use or agricultural chemicals”, Lars Straub, a researcher at the University of Bern, Switzerland and lead author on the study, explained to Biosphere.

The researchers then measured body mass and lifespan of honeybee drones, and, crucially, the quantity and quality of sperm they produced. To measure sperm quality, they collected a ‘sperm solution’ from the reproductive tracts of males and, using a coloured dye and fluorescent microscope, were able to determine the ratio of living to dead sperm.

Once a honeybee queen has mated with numerous males during a brief mating flight, she will remain in the colony to lay eggs, never mating again and retaining all collected sperm in a specialised sperm-storage organ.

As Straub explains, sperm quality can have profound consequences for both the health of the queen and the entire colony: “When she runs out of sperm the colony will kill her and replace her with a new queen. This is of course risky, as rearing new queens is not without danger. They could end up queenless if something goes wrong; this would ultimately result in the eventual death of the colony.”

Thus, impaired reproduction at the hands of these common insecticides may partially explain the increased annual mortality observed in managed honeybees. “Neonics may not be the primary driver responsible for honeybee colony mortality, but they could certainly contribute, particularly if they interact with other stressors”, says Straub.

And what about other, wild insect pollinators? Further research is needed to understand whether neonicotinoid exposure has similar consequences for the reproductive potential of other pollinating insects. If it does, the implications for declining pollinators, and the valuable ecosystem services they provide, will have global relevance.