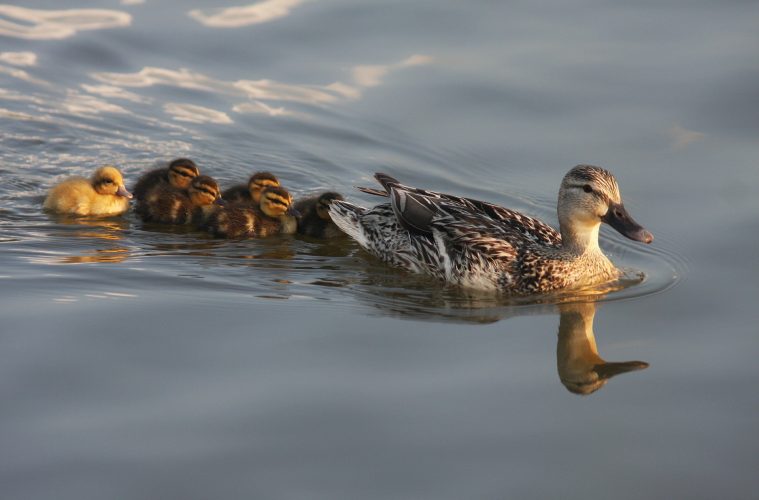 Not just cute and fluffy, ducklings are smart as well!

Ducklings are smarter than you might think. They are capable of grasping the concept of ‘same’ and ‘different’ only a short time after they have hatched. Previously, it was thought that only apes, crows and other highly intelligent animals were able to do this, but now University of Oxford research has highlighted the ducklings’ ability for abstract thinking. And it is linked to the phenomenon of imprinting.

Imprinting occurs after the ducklings hatch, where they identify and form an attachment to their mother. It is a form of learning – it can happen within 15 minutes of hatching, and there is a critical period in which it must occur. It is by using imprinting that the researchers were able to investigate the abstract thinking abilities of ducklings, by getting them to imprint on a moving object rather than their mother.

Each duckling was exposed to a pair of objects moving in a circle that were either the same as, or different from, each other in terms of colour or shape. A pair of spheres, for example, or two green shapes. Once they had imprinted on the objects, they were then tested for their preference between two other pairs of moving objects. These two pairs would be different to the one they were initially exposed to, and the researchers would observe which of the pairs the ducklings started to follow around. Continuing the previous example where the ducklings imprinted on two spheres, they would then be shown a pair of pyramids (‘same’) and a pair consisting of one cube and one pyramid (‘different’).

A matter of survival

This study challenges the commonly held thoughts that only animals like primates and crows are intelligent enough to have this kind of thinking, and it shows that ducklings may be able to recognise this ‘same’ and ‘different’ concept better than other animals.

“Other animals that have demonstrated this ability have all done so by being repeatedly rewarded for correct performance, while our ducklings did it spontaneously,” said Professor Alex Kacelnik.

It seems that the imprinting process is what allows these ducklings to gain this ability. Their survival depends on being able to quickly recognise their mother, even as her own shape constantly changes – think spread wings or head disappearing beneath the water during foraging – and so this kind of thinking, the recognition of ‘same’ vs ‘different’, is absolutely vital.

“When a duckling is young, it needs to be able to stay near its mother for protection,” said co-author Antone Martinho, “an error in identifying her could be fatal.”

Since many birds use imprinting as well as some other animals, this abstract thinking may then not be as rare as first thought.