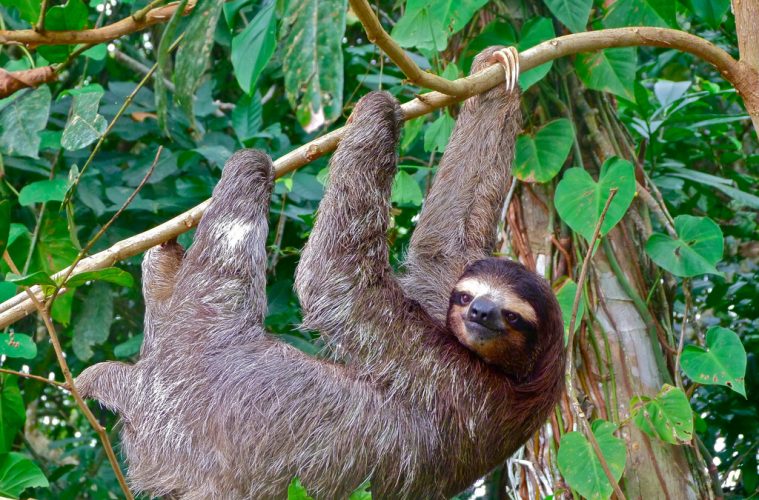 Whilst trees grow across the globe, there are few mammals that call them home. One exception is the sloth, which spends its days creeping through the tree canopy, eating only leaves.

A new study has found that the sloth’s infamous lazy lifestyle is a direct result of this arboreal diet and habitat. The research was conducted by scientists at the University of Wisconsin-Madison in the USA, and was recently published in the journal American Naturalist.

“Among vertebrates, this is the rarest of lifestyles,” said Jonathan Pauli, University of Wisconsin-Madison professor of forest and wildlife ecology, and the study’s lead author. “When you picture animals that live off plant leaves, they are almost all big – things like moose, elk and deer. What’s super interesting about arboreal folivores is that they can’t be big.”

Pauli and his colleagues measured the energy expenditure of two- and three-toed sloths in Costa Rica. The aim of their experiment was to help uncover why arboreal folivores are rare, and why more animals have not evolved to exploit such a widespread niche.

“Most of the world is forested, but the energetic constraints of a leafy diet seem to prevent adaptive radiation,” explains Pauli. Adaptive radiation occurs when a species quickly evolves into different forms, each occupying it’s own ecological niche. This reduces competition for food and resources, as each new species can dominate its own unique habitat and diet.

When it comes to eating leaves, “The food sucks,” says Pauli. “It’s only plant leaves. You have to exploit a very constrained niche.”

This kind of niche requires a great deal of specialisation, which is why sloths are one of the most strange and distinctive creatures on our planet. They have a low body mass, a slow metabolic rate and specialised limbs. They also have claws that act like hooks, allowing them to hang from branches in the canopy.

The need for a slow metabolism is due to the low energy content of leaves; animals with fast metabolisms could not survive on leaves alone.

“This study explains why eating leaves in the canopies of trees leads to life in the slow lane, why fast-moving animals like birds tend not to eat leaves, and why animals like deer that eat a lot of leaves tend to be big and live on the ground,” says Doug Levey, programme director in the National Science Foundation’s Division of Environmental Biology, which funded the research.

Slowing the speed in the tops of the trees

Using a type of isotopically labelled water, the researchers were able to determine how much energy the sloths use each day. They found that three-toed sloths, which are more specialised than two-toed sloths, expend as little as 460 kilojoules of energy per day, the same as burning 110 calories – which we could burn on a half an hour walk! This energy expenditure is the lowest recorded of any species of mammal.

The researchers then looked at how these results compared to the recorded expenditure use of other tree-dwelling mammals worldwide. They found that the more a species is adapted to an arboreal lifestyle, the lower its energy output.

“The findings reinforce the concept that arboreal folivores are tightly constrained by nutritional energetics,” adds Pauli. “It takes a suite of extraordinary adaptations to survive in forest canopies, and this may help explain the lack of species diversification among arboreal folivores.”