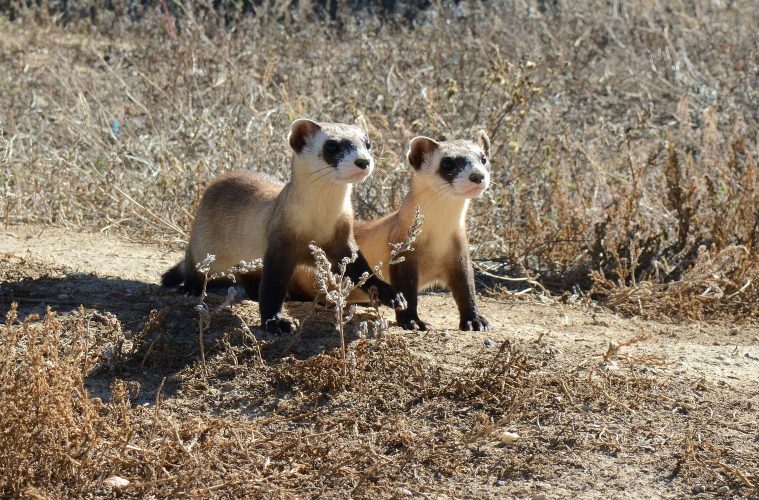 How to save black-footed ferrets from a deathly plague? Fire vaccine-coated M&Ms across it’s habitat by drone, of course. This is the latest plan from the US government hoping to save the Endangered mustelid.

Once found throughout the Great Plains of America, the black-footed ferret’s numbers plummeted, particularly due to their susceptibility to a vicious plague. The deadly disease, known as sylvatic plague, was carried to America by fleas on ship rats in the 1800s.

Sylvatic plague is also sustained in the prairie dog population, which is far more numerous and will therefore be the target of the vaccine-coated M&Ms. Black-footed ferrets rely heavily on prairie dogs as a source of food, and they also exploit their burrows for shelter, so the species are intimately linked. It’s possible to inoculate the animals through individual injection, but this is time consuming so a new, more efficient method was required.

M&Ms coated in vaccine will be sprayed across the mammals’ habitat, using specially designed drones able to spread M&Ms in 3 different directions. Distribution is important, as it will allow as many animals as possible to get their paws on these new found treats.

Randy Machett, a biologist from the FWS described the new device as a “glorified gumball machine,” which will use GPS to drop M&Ms at 30-foot intervals.

Explaining to the Guardian why the technique is necessary, Machett said, “spraying burrows with insecticide to kill the fleas is also labor intensive and not a long-term solution. So we are working with private contractors to develop equipment to drop the vaccine uniformly across an area, rather than one hog getting to eat a big pile of them.”

Using M&Ms has been successfully trialed in lab studies, where they were coated with vaccine-laced peanut butter. The mixture also contained a special dye, which coloured the prairies dogs’ whiskers, showing scientists that they had consumed it.

Sweetening the deal for black-footed ferrets

At present, there are only 300 black-footed ferrets in the whole of the USA. They were officially declared extinct in 1981, but thanks to a remarkable captive breeding programme, they are successfully living in the wild again.

Although less endangered than the ferrets, prairie dogs are also at risk. The demise of the two species is a result of disease, habitat loss and shooting by farmers who consider them as pests. Although some farmers have spoken out against the new inoculation programme, according to Machett most people have been supportive. After a first trial in Montana in September, the programme will hopefully expand to areas in Arizona and Colorado.

“This is what the Endangered Species Act is all about – saving species, particularly those affected by human actions,” said Machett. If successful, this inventive new method could keep the black-footed ferrets on the road to recovery.