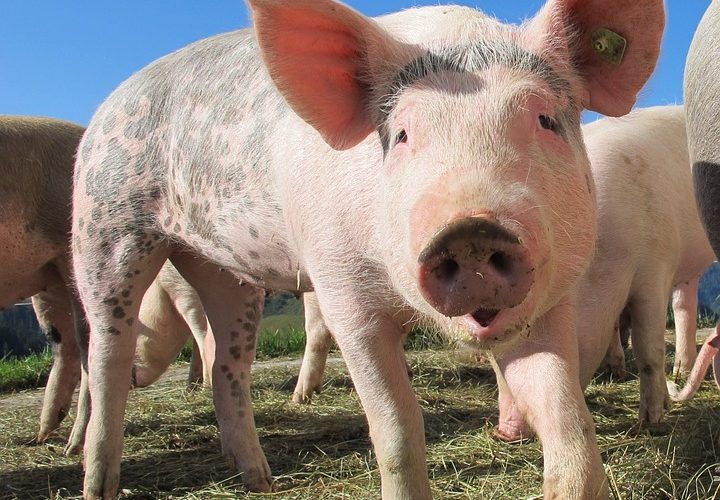 As happy as a pig in… an enriched environment

Pigs have highly evolved social structures and exhibit clear personalities. But how do the classic grunts and oinks a pig makes help us understand these personalities?

Researchers led by Mary Friel of Queen’s University Belfast recently investigated pig personalities, and what can be learnt from the animals’ trademark grunts.

“The aim was to investigate what factors affect vocalisations in pigs so that we can better understand what information they convey,” said Friel.

In a two part experiment, domestic pigs (Sus scrofa domestica) were first assessed on their personality traits. While being introduced to novel objects, such as an unfamiliar bucket or traffic cone, their behaviour and grunt rate was recorded. As you might expect, pigs with more confident personalities were found to display a greater attraction to the novel object. These pigs also tended to have a higher grunt rate.

The second part of the study investigated the impact of housing conditions on grunt rate. Half of the pigs were housed in minimum UK standard pens, barren areas with little enrichment and concrete floors. The other half lived in larger, straw-lined pens with increased enrichment via more opportunities to forage. All tests showed that pigs living in the better, enriched pens were more proactive. And, importantly, they grunted more.

Interestingly, males were far more susceptible to changes in their living quarters than females were. The grunt rate of males which were housed in the lower quality conditions was consistently lower than their more pampered counterparts.

So what can this tell us? It seems that a noisy pig is a happy pig!

The next steps in this fascinating study could involve further specific assessment of the improved living quarters to find out exactly what criteria are required to ensure every pig is a happy pig. It is also possible that the gender of pigs in research may now require reconsideration, as this study indicates that female pigs may be more resilient to environmental hardships.

Ensuring all pigs experience welfare of the highest standards is extremely important. These intelligent creatures are not only used for farming but also in medical research, so the consequences of the findings could yet be far-reaching.