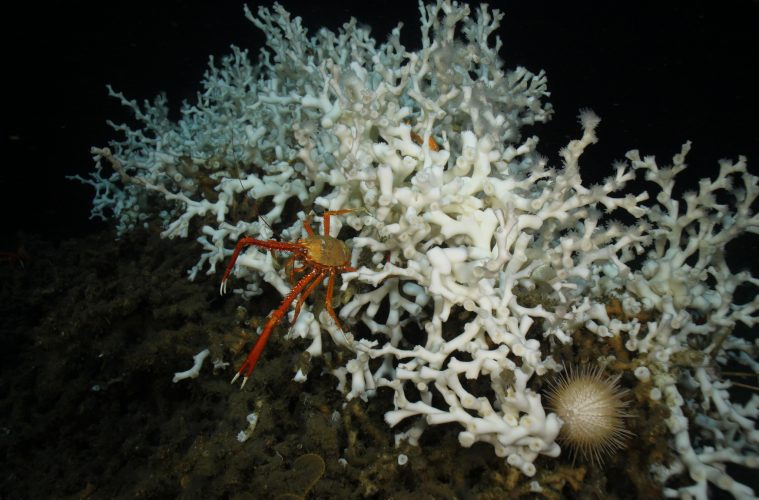 It only took a few years for the deep-sea coral reefs of the Darwin Mounds to be decimated by bottom trawls, and even after eight years of protection, a new study shows virtually no recovery at all—a testament to the tragic destruction that bottom trawls are capable of and a warning to protect vulnerable marine areas before they are destroyed.

A thousand meters below the ocean surface is a world that is dark and cold—but not nearly as devoid of life as was once believed. The fish and corals that live in the deep are fascinating survivors of a harsh environment where time is measured in centuries, not years.

Deep-sea fish and corals grow at a glacial pace, which makes them uniquely vulnerable to overexploitation by fisheries. With shallow seas running low on fish stocks in recent years, fisheries are targeting the deep-sea more and more, employing staggeringly destructive gear such as bottom trawls that in a few hours can level a coral reef which took hundreds of years to grow.

One such reef can be found surrounding the Darwin Mounds, a series of deep-sea hills off the west coast of Scotland that host a unique combination of coldwater corals, which have adapted to survive in particularly tricky seafloor conditions. The Mounds were first discovered in 1998 and very quickly became a target of the deep-sea trawling industry. But fortunately the importance of the Mounds’ rare coral adaptations was quickly brought to the attention of the local government and in 2003 the Darwin Mounds were designated as the UK’s very first Marine Protected Area (MPA) and trawling was forbidden. By this point, the Eastern Darwin Mounds had been trawled quite extensively by deep-sea fishers, but the industry had not yet moved to the Western Darwin Mounds, which remained virtually untouched.

MPAs can be excellent conservation and fishery management tools to help depleted populations recover and damaged habitats regrow, and they have had recent success in tropical seas and even in cooler temperate waters. The deep sea, however, is another story completely—how long would a damaged deep-sea habitat need to be protected before it could recover from the fishers’ indiscriminately destructive gear? A recently published study details how a team of scientists from the National Oceanography Centre at the University of Southampton set out to check in on the Darwin Mounds and answer that very question, several years post-MPA enactment.

Over the course of several months in 2011 the researchers used the latest hi-tech surveying equipment, employing acoustic imagery, tow-cameras, and Remotely Operated Vehicles (ROVs) to scan the seafloor around the Darwin Mounds. They then sifted through the extensive photos and videos, carefully analysing the condition of the habitat and comparing their results with the photos and data that had been collected in the same area from 1998-2000. Madrepora oculata, one of the main cold-water coral species around the Darwin Mounds @ NOAA/Flickr

The scientists were struck by what they found—or rather, by what they didn’t find. It had been eleven years since the original photographs of the area were taken, eight years since the Darwin Mounds were designated as a protected area, and yet the condition of the deep-sea habitat looked very much the same. No new corals had appeared in the intervening time, even without the interference of human activity.

The Eastern Darwin Mounds still bore the literal scars of the attacks they had endured; the deep gouges from trawl doors were clearly seen crisscrossing across the ocean floor. Every once in a while, the team would spot a partially damaged stand of coral that appeared to have regrown a very small amount in the years that had passed—but overwhelmingly, the long-enduring coldwater coral reefs of the Eastern Darwin Mounds had been reduced to nothing but coral rubble and bony fragments. The researchers found no indication whatsoever that any coral species was recolonising the demolished ground.

In stark contrast, the Western Darwin Mounds had been spared the assault of heavy fishing gear and so supported extensive coral colonies that were still very much alive, appearing vividly red in the flash of the camera’s light. The team was even able to locate many of the exact same colonies that had been photographed eleven years earlier, slowly growing with the infinite patience of millennia. The coral reefs of the Western Darwin Mounds and the fish and invertebrates sheltering beneath the branches stand proud as both a successfully safeguarded near-pristine habitat and a heartbreaking illustration of the wonder that the Eastern Darwin Mounds once were and may never be again.

The team was even able to locate many of the exact same colonies that had been photographed eleven years earlier, slowly growing with the infinite patience of millennia.

The deep sea is not like the shallows, and regrowth and recovery there is inexorably slow if it even happens at all. Considering the nature of life in the deep, it is difficult under any circumstances for a deep-sea fishery to be truly “sustainable,” but this is especially true when habitat-destroying gear such as bottom trawls are used. This horrifyingly wasteful practice has been compared by marine scientists to the clear-cutting of ancient redwood forests.

Some policymakers or fisheries managers may be tempted to conclude from this study that MPAs are ineffective at restoring damaged habitat, but in fact this study truly shows that MPAs are more important than ever to safeguard marine habitats before they are quickly demolished. It is a clear warning that deep-sea habitats cannot easily bounce back from the damage of human exploitation, and must be protected proactively. It is only because the MPA at Darwin Mounds was created swiftly and well-enforced that the Western Darwin Mounds have been preserved so well.

As humanity explores more and more of the ocean floor, other cold-water corals and deep-sea wonders will be found, and it will be up to us to decide which version of their future will be actualised. These unique areas can be either protected or pulverised, conserved or consumed—but as this study suggests, once they are gone they will be lost to us for a very, very long time.