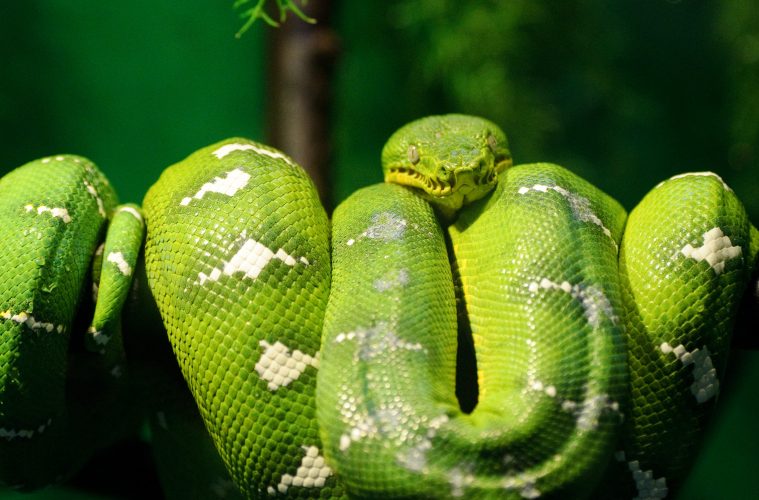 Boas and pythons aren’t that closely related, last sharing a common ancestor 60-90 million years ago, but they are remarkably similar in appearance. A recent study has found that boas and pythons have evolved the same adaptations in response to shared habitat types, showing that habitat is a key driving force behind the evolution of a snake’s shape.

Pythons can be found in Africa, Asia and Australia, while boas are even more widespread, although skipping Australia entirely. Being so widespread, these snakes reside in greatly varying habitats and climates, and are diverse in their appearance, with individuals ranging from tiny pygmies to the world’s largest snakes.

Both boas and pythons have become similarly adept at navigating different ecological niches, some living an arboreal life in the trees, some dwelling on the ground as terrestrial reptiles, some burrowing underneath the ground and classed as ‘fossorial’, others living a semi-aquatic life, and some skilled at life in multiple environments.

The researchers spent time looking at the 44 python species and 58 boa species, and found that when boas and pythons shared a similar lifestyle, this was when they looked most like one another. This suggests that by living in the same habitat, pythons and boas evolved independent similarities, and this happened multiple times in different habitat types, providing an important example of convergent evolution.

“The finding of such a strong case of convergent evolution demonstrates the power of natural selection and adaptation in living organisms,” said lead author Damien Esquerre from the Australian National University Research School of Biology. “If we see that different groups evolve the same things independently when they face the same challenges, we can find predictability in evolution.”

The study looked at the head shape of museum specimens, and found that the main differences between ecological lifestyle occur in the outline of the head and the position of a snake’s eyes. This suggests that that vision in relation to habitat use and movement through their habitats is what drives shape evolution in snakes. Burrowing species of snakes and boa, both fossorial and semi-fossorial, had broader, shorter heads with smaller eyes. This makes sense when you think of their confined lifestyle lacking in light.

Arboreal, semi-arboreal, terrestrial and semi-aquatic snakes were separated based on how ‘funnel-shaped’ the head is. Arboreal snakes have the most funnel-shaped heads, and the head shape of other snakes becomes more streamlined as they move from the trees, to the ground, and into the water.

The repeated evolution of similar shapes in adaptation to similar habitats may be because the number of ways snakes can evolve is limited. As they are limbless and swallow their prey whole, the number of potential adaptations to their environment is somewhat restricted.

Fossorial species encompass as much diversity in their appearance as arboreal, semi-arboreal terrestrial and semi-aquatic snakes together. Burrowing species cover the entire range from streamlined to ‘funnel-shaped’ heads, ranging from pointy- to round-headed. Perhaps because there are many different methods that allow a snake to burrow, using alternative approaches such as drilling or shovelling, as well as requiring adaptations to different substrates they may need to dig through, such as sand and mud.

One of the key factors these findings can help with in future research is to understand the type of habitat that extinct species may have lived in, based on their own particular morphologies.