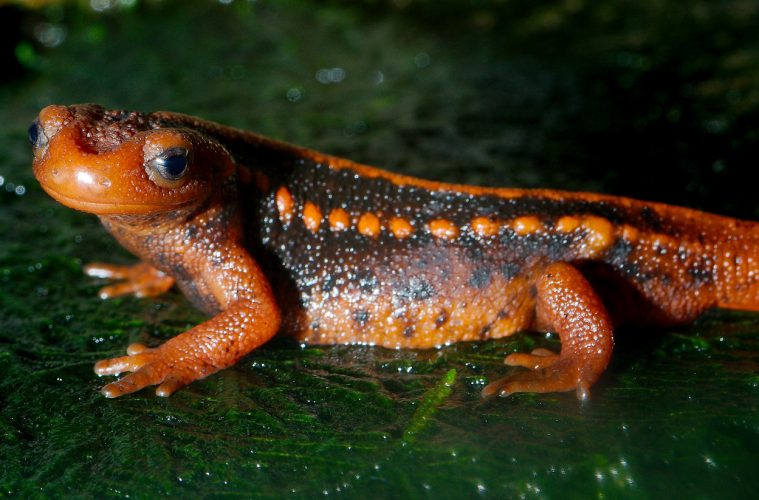 The first-ever study to investigate the international, unregulated, and often illegal pet trade in Southeast Asian newts warns that the practice may spell disaster for vulnerable wild populations, and pushes for immediate legal action to bring this avaricious industry under control.

As is the case with many similar conservation concerns, the onus is on biologists to prove that the pet trade is doing harm to wild populations instead of on newt exporters and importers to prove their business isn’t.  And no one has ever taken a good, hard look at the nature and extent of the global trade in Southeast Asian newts—until now.

Amphibians are undeniably intriguing animals and can be exciting pets—yet there is a downside to this natural fascination. The global amphibian pet trade encompasses many countries, involves hundreds of species, and is responsible for a number of declines in wild amphibian populations—as is the case currently with the newts of Southeast Asia.

Of the fourteen species of Southeast Asian newt that have been described so far, ten are endemic to the region, meaning they are found nowhere else on Earth and so are especially vulnerable to extinction. It’s almost certain that there are even more species of Southeast Asian newt that science is yet to discover, and even among the species we have named, we still know next to nothing about their basic biology, ecology, or conservation status. It is entirely possible that unique amphibian species will vanish unnoticed and unmourned because the actions of humanity wipe them out before they are even properly found.

Since there is very little information to go on, most of these fourteen species haven’t been assessed yet by the International Union for Conservation of Nature (IUCN) to determine if they should perhaps be classified as Threatened or Endangered. Yet in a cruel Catch-22, without formal classification by the IUCN and the legal trade restrictions and regulation that status implies, these newts may quietly disappear before scientists even get a chance to organise and carry out the studies necessary to provide the IUCN with sufficient data.

Fears about the devastation the pet trade can bring to a vulnerable amphibian population run so high among biologists that a recent scientific publication describing a new species of newt in China purposefully omitted the location of their collection site from the paper, and preemptively begged all amphibian hobbyists not to seek out the new species. The biologists that study rare amphibians know firsthand how quickly their study sites can be emptied, the former inhabitants dispersed to terrariums across the globe.

Researchers from the Australian Museum Research Institute and the conservation organization TRAFFIC recently undertook a global study to build the first real picture of the thriving newt-based market. They examined import and export records of Southeast Asian newts from as many countries as possible, monitored the global online trade in every nook and cranny of the internet, and personally interviewed the local pet trades of Southeast Asia to finally get some hard numbers on how many newts are involved. The Himalayan crocodile newt is the most popular Southeast Asian species imported to the USA. © John Clare/Flickr

Naturally, the answer was ‘an awful lot’. Even only looking at the official import records from countries where such data was accessible, the new study reveals that thousands of Southeast Asian newts have crossed international lines over the past decade or so—enough to make a significant difference when one considers how fragile endemic populations often are.

Between 2005 and 2014, over 7500 individual Southeast Asian newts of various species were recorded as imported into the United States alone, with the vast majority being specifically marked as wild-caught. Additionally, over 700 Southeast Asian newts were recorded as imported into the EU over only a few years (2011 to 2013) with over 90% of these being imported into Germany. In the US the most popular species appeared to be Tylototriton verrucosus, commonly known as the “Himalayan crocodile newt,” while in the EU it was surpassed by Tylototriton asperrimus, the “black knobby newt.”

Furthermore, these numbers reflect only those newts which were recorded by exact species name at the time of import. The research team discovered that newts were often recorded only by a vague common name or by genus, making it impossible to confirm that the individuals in question were from Southeast Asia specifically. It is almost certain that many newts were brought into the assessed countries without any record whatsoever.

The researchers were unable to obtain Japan’s or China’s import records, but judging by the vibrant online activity surrounding Southeast Asian newts being offered for sale in these countries, they are significant importers as well. In fact, it’s likely most buyers from any country were making their purchases online, with some Southeast Asian newts up for sale for as little as $30 each. According to local pet sellers in Southeast Asia with whom the researchers spoke directly, newts have even been sold for as low as $1.20 per individual to amphibian collectors who visit the region in person and buy in bulk.

While some Southeast Asian newt species do have legal protection locally, the enforcement of such laws is very weak, and the fact that none of the fourteen Southeast Asian newt species are listed on the Convention on International Trade in Endangered Species of Wild Fauna and Flora (CITES) List makes international monitoring and regulation fairly nonexistent. Ultimately, the trade in Southeast Asian newts is so unregulated and rarely recorded that the results of this study could only capture a tiny subset of the actual depth and scale of the trade—meaning the thousands of examples they did uncover should be viewed as an ominous bare minimum, not an overall average.

The researchers behind this eye-opening study strongly recommend listing the Southeast Asian newt species on CITES so that the international trade in these species can be heavily regulated, if not banned outright, and not only to protect Southeast Asia’s newts. The trade in non-native animals also has the potential to harm the local amphibian species of the importing countries in Europe and North America as well. Asian newts specifically have been identified as vectors for the introduction of the deadly pathogen Batrachochytrium salamandrivorans (Bd) into Europe, a disease with nearly 100% mortality for native European salamanders.

As fascinating as these amphibians are, and as exciting as it can be to own and admire one in your own home, at the end of the day the zeal of pet collectors does not justify robbing the nations of Southeast Asia of their unique native species. Even and especially in the absence of effective legislation ensuring that all amphibians on the open market are responsibly sourced, eager would-be newt owners would be well-advised to choose their next pet carefully.

Perhaps it would be best to admit that the striking orange emperor newt in that advert would do the world far more good adding to the population in its home habitat than it would do sitting in your personal terrarium—and that it is, quite simply, #NotYourNewt.