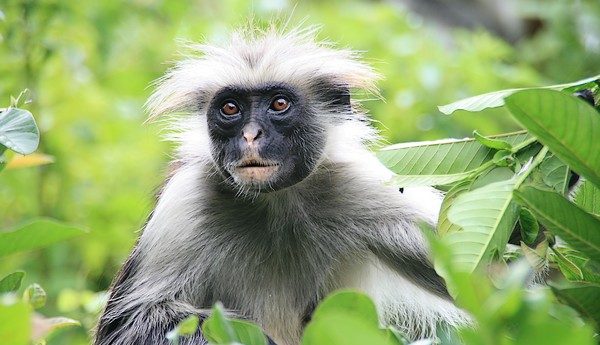 A rising market for bush meat and an associated increase in hunting with guns on Bioko Island has put seven species of monkey under threat of extinction.

Bioko Island, part of Equatorial Guinea, is known for its highly biodiverse and unique ecosystem, a result of long-term isolation from the mainland. Like much of West Africa, Bioko’s primates are under threat from the thriving trade in bush meat, which is the meat of any wild African animal, but particularly that from monkeys. The meat is considered to be a delicacy and is also priced as such – further encouraging hunters to exploit primate populations.

Researchers from the Bioko Biodiversity Protection Programme created a ‘Hunting Response Index’ for the primates studied. They concluded that four species – the Bioko drill monkey (Mandrillus leucophaeus), crowned guenon (Cercopithecus pogonias), black colobus (Colobus satanas) and Pennant’s red colobus (Procolobus pennantii) – all displayed significant vulnerability to gun hunting and will likely be unable to cope with the ongoing threat. The two remaining species – the red-eared monkey (Cercopithecus erythrotis) and the putty-nosed monkey (Cercopithecus nicitans) appeared to have adopted behaviours which made them more tolerant to hunting, including decreasing their vocalisations and becoming more cryptic.

Pennant’s red colobus, which proved to be one of the worst-faring species studied, has a larger relative body size and group size than that of the more tolerant species. This combination of traits appears to be making it both more vulnerable to being spotted by hunters and more coveted for bush meat. The species is also highly specialised and adapted to certain environments, leading to a high likelihood that the red colobus has already been wiped out from large portions of the island.

Besides the potential loss of several unique species, the monkeys are important seed dispersers and are largely responsible for maintaining Bioko’s forests. Drew Cronin, a postdoctoral research fellow who contributed to the study, explains: “In hunted forests, where animals like primates have been hunted out, there have been negative cascading ecological effects and large scale changes to forest structure. Bioko’s monkeys are also a real national treasure: think of the iconic fauna in the US, like the bison or the bald eagle, and the national identity that those species lend to the population. Bioko’s monkeys are its most charismatic species and can be flagships for conservation in the country.” The researchers suggested two potential action strategies in light of their findings, including both an immediate short-term and long-term plan.

Stop-gap measures could include implementing a system of forest guards in particularly vulnerable areas, utilising existing military patrols on the island. The government of Equatorial Guinea has thus far been ineffective in enforcing poaching bans on Bioko, and the creation of roads and other infrastructure has allowed easier access for hunters to previously inaccessible areas.

In the long term, the researchers suggest the development of a comprehensive management plan for Bioko’s 130,000 acre preserve, the Gran Caldera Scientific Reserve. Such action, however, would require significant financial and governmental commitment. Success will therefore ultimately depend on the ability of campaigners to convince officials of the value of conservation.

“We haven’t yet reached the tipping point, but we believe it’s achievable,” Cronin said. “We have been gaining a lot of momentum in recent years and there are more and more capable people getting engaged in the culture of conservation that we’re advocating. If we are successful in in convincing a few of the ‘right’ people, we’ll take some big steps forward.

“If the government’s attention is not turned to Bioko’s wildlife soon, the extermination of several species on the island, including the endemic red colobus, could be not far down the line. It is incredibly important to protect these species from hunting and other threats. Bioko’s primates are largely endemic to the island, and even those that are also found on the mainland are endemic only to the region, which means they’re not widespread. If we don’t protect them on Bioko, they may be lost forever.”