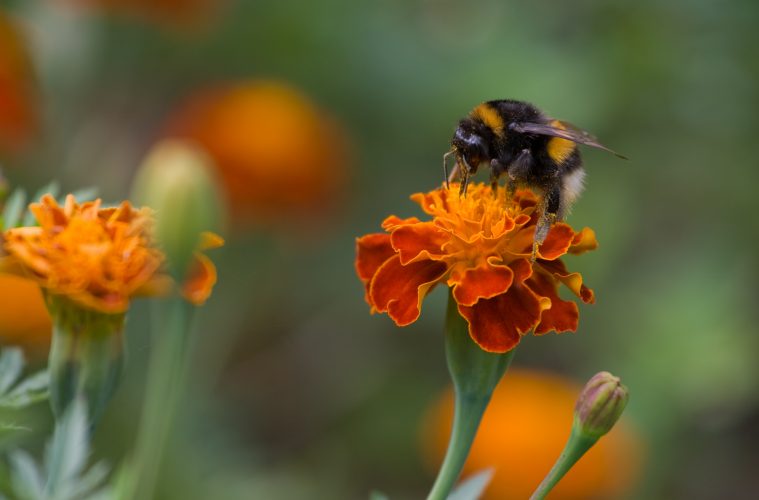 Bees and their allies are not only beautiful and fascinating creatures, they are essential natural assets too. By pollinating our flowers and crops, they are crucial for a functioning ecosystem and economy. However, increasing urbanisation and agricultural intensification are considered to have a negative impact on pollinators. Researchers from Germany designed a study to discover if there is a  link between the way humans use the land and the way bees pollinate wild flowers. Their results, published in the Proceedings of the Royal Society B, show that towns and cities are a hive of activity compared to the countryside.

Plants specially grown for the study in pollinator-free greenhouses were planted in nine locations – either in the urban centre of Halle (Germany) or in increasingly agricultural areas outside the city. During the flowering period, researchers carefully monitored which pollinators visited the flowers and how frequently they did so. This took an admirable amount of patience: 800 minutes observation per site totalling 32 days of observation! The results showed that plants are more often pollinated and more likely to set seed in urban areas. This is due to a higher number of pollinators visiting plants in urban areas compared to the countryside.

Bumblebees were the most common insect visiting the study flowers, and were captured during the study. This allowed researchers to examine two parasites which primarily affect the bees’ digestive tract. Crithidia bombi, a common gut parasite, affects colony reproduction and foraging performance. Nosema bombi, a rarer parasite, infects the entire animal, reducing worker survival and colony fitness. Interestingly, more parasites were found in bees that were captured in the city.

“Parasites are a normal element of natural ecosystems. In this respect, there is nothing bad about this observation,” explains Panagiotis Theodorou, lead author of the study and PhD student at the Institute of Biology, Martin Luther University.

“The study also vividly shows how poor conditions are for the wild bees and the plants they pollinate in the modern farmed environment,” says Professor Robert Paxton, professor of biology at MLU.

The countryside isn’t as idyllic a habitat as you might imagine. It can prove an impenetrable barrier to many insects: cut, strimmed and sprayed with pesticides, it is often barren and monocultural, lacking the irresistible colour and smell of wildflowers that attract our bees. In contrast, urban areas are surprisingly attractive to pollinators. Row after row of gardens, filled with a diversity of cultivated flowers, trees, and shrubs, offer plenty of opportunity for bees to nest and feed. Overgrown brownfield sites, parks and roadside verges often contain a throng of beautiful wildflowers which prove irresistible to pollinators.

This research should encourage us to cherish our urban jungles as epicentres of pollinator diversity,  and continue to provide pollinator-friendly flowers in our gardens.

Subscribe
Discover the story behind the research through the scientist’s eyes, subscribe to Biosphere digital magazine for access to in-depth articles that bring the natural world to life.