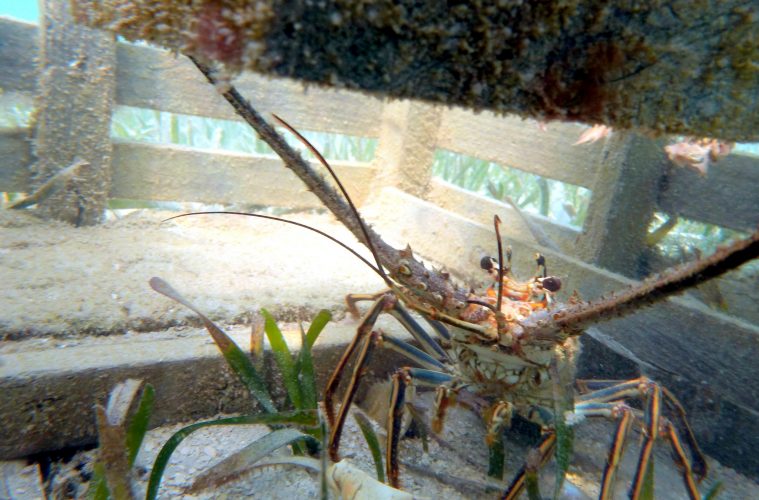 Lost fishing traps in the Florida Keys are killing lobsters and damaging the seabed, and with tropical storms predicted to grow ever stronger, the problem of “ghost fishing” is only going to get worse in years to come. A new study has highlighted this ‘perfect storm’ that is gathering in Florida’s waters.

Caribbean spiny lobster is one of the most popular items on nearly every restaurant menu in the Florida Keys, a dish appreciated by locals and vacationers alike. Every season fishers in the Keys are permitted to deploy 479,000 lobster traps to meet this demand—and every season, thousands and thousands of these traps never make it back on the boat.

There are many reasons why lobster fishers may fail to recover some of their traps; perhaps the gear became entangled on the ocean floor, or the buoy lines were cut by vandals, or the fisher’s GPS couldn’t pinpoint the gear’s location. And yet, these traps are so efficient and resilient that they continue to fulfill their design of catching and killing lobsters even long after they are abandoned. This phenomenon is referred to as “ghost fishing”—when traps blindly fish on and on, unnoticed and unattended, while dead and dying animals pile up inside the coral-encrusted wire cages. Every year, the number of forgotten traps in the Keys rises higher and higher as cleanup and recovery efforts fail to keep up with accumulation.

This deadly trend is especially alarming in light of the fact that the Florida Keys spiny lobster population has been declining for over fifteen years. The lobster fishery faces enormous pressure to maintain landings even as their crucial spawning stock is depleted and lobster nursery habitats are destroyed. Needless to say, the Keys really can’t afford to lose any more lobsters to phantom traps, and yet they are. No one really knows exactly how many individuals are being wastefully killed by ghost fishing, but it’s estimated to be over half a million individual lobsters dying for nothing each year.

If that wasn’t bad enough, these lobster traps are also dragged by wind and waves over critical habitat, tearing gouges through beds of seagrass and smashing chunks out of coral reefs. Sadly, marine habitats are already disappearing worldwide thanks to bottom trawling and coastal development—which only makes it more important not to further damage the areas that do remain.

And there is one more factor bringing about the “perfect storm” of ghost fishing—storms themselves. When hurricanes or high winds come blasting through the Caribbean Sea, fishing gear loss skyrockets. In some seasons over half of all the lobster traps deployed by the entire Floridian fleet have been torn away into the ocean blue, never to be recovered. Considering nearly all climate models agree that as a result of anthropogenic climate change the storms of the near future will be even more powerful and more likely to achieve hurricane status, that’s an ominous warning for a sea already chockablock with phantom fishing gear. That’s why researcher Amy Uhrin of the National Oceanic and Atmospheric Association’s Marine Debris Program recently examined this intersection of stronger storms and lost lobster traps and strove to paint a picture of what the future of the Florida Keys will or could look like. Extensive data on lobster trap deployment and loss, past wind speed events, and the latest projections of the upcoming altered climate were gathered together in order to build a model that demonstrates what the future will have in store for the Florida Keys.

In some iterations of Uhrin’s model, lobster trap allowance remained the same, at 479,000 traps per season. In other scenarios the trap allowance was reduced to 400,000 traps (which is nominally the state of Florida’s goal, although under the current rate of trap reduction it won’t be reached until 2045). Uhrin also built in scenarios in which the lobster trap allowance was reduced to 180,000 per season. This level of fishing represents the Maximum Economic Yield (MEY)—the number that creates the largest positive difference between revenues and cost. Finally, Uhrin crafted three different potential weather regimes in which tropical storms either stayed the same, moderately intensified, or greatly intensified and ran the model under every possible combination of scenarios.

The results of Uhrin’s model confirmed without doubt that if tropical storms intensify, more and more traps will be lost each year and the amount of derelict gear ghost fishing in the Keys will continue to pile up. Yet her model also calculated that if lobster fishing effort were reduced to the MEY level of 180,000 traps, gear loss would be alleviated by over 62%, preventing hundreds of thousands of traps from vanishing into the depths and saving millions of lobster lives.

The efforts to clean up the Keys and recover lost fishing gear that do exist today are nowhere near capable of keeping up with the existing rate of trap accumulation—currently there are over one million derelict fishing traps just within the boundaries of the Florida Keys National Marine Sanctuary! And Uhrin’s model warned that if today’s level of fishing effort is maintained into the indefinite future, well over 11 million lobster traps could go missing over the next 60 or so years.

Hopefully, with the red flags raised by Uhrin’s research, a solution can be reached before that point. Drastically reducing the number of lobster traps allowed, revamping efforts to address anthropogenic climate change, urging additional research to understand the extent and consequences of the ghost fishing problem, and finding new ways to minimise gear loss and/or maximise gear recovery would all help keep lobsters alive and marine habitats intact.

Ghost lobster traps cause additional mortality in an already struggling fishery, damage undersea habitat that is already threatened by trawling, and the problem is only going to get worse in the coming years due to climate change-trigged storm intensification. This is no longer an issue that can be swept under the rug—or under the coral reef.