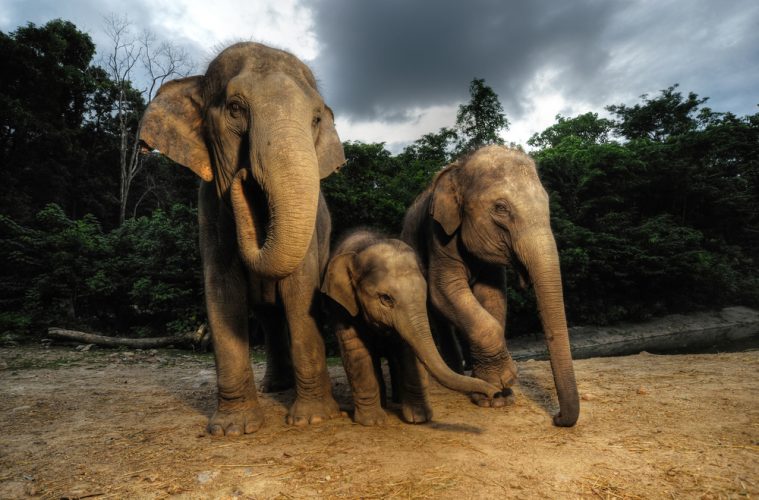 Asian elephants benefit from the presence of their grandmothers: both the breeding success of their daughters and the survival rate of calves receive a boost.

They are one of the longest living terrestrial species, reaching ages of up to 80 years in their social groups. In the last few decades, their wild population numbers have halved to below 50,000, prompting conservation efforts and investigations into how to increase their calf survival.

Using 80 years worth of data from a population of Asian elephants working in timber extraction in Myanmar (Burma),  a research group from the University of Turku in Finland recently attempted to figure out what may cause/reduce infant mortality in calves.

As Asian elephants are capable of reproduction even after 60 years of age, due to them having no clear menopause, the team wanted to investigate the ‘grandmother hypothesis’ in Myanmar’s elephants. The grandmother hypothesis suggests animals that have evolved to live decades after their reproductive period (e.g. humans, elephants, and orcas), have done so in order to provide some form of benefit – perhaps care and wisdom – and increase survival of their grandchildren.

“We found that calves of young elephant mothers under 20 years of age had eight times lower mortality risk if the grandmother resided in the same location compared to calves whose grandmother was not present,” said lead author Mirkka Lahdenperä.

The team discovered that the more offspring a grandmother elephant has, the greater the chance of her grandcalves’ survival. Not only does the grandmothers’ presence increase calf survival, but they also appear to boost the reproductive rate of their daughters in the group.

But what are the applications, and what does this mean for the conservation of Asia’s struggling elephant populations?

“Our results showing the essential role of the elephant grandmothers are significant for the conservation of this endangered species,” said Lahdenperä. “In zoos, the typical multi-generational groups are rare and animals are often moved between zoos.”

This simple change of ensuring grandmothers stay within their family groups is important as most studied populations have 25-50% calf survival rate in calves under 5 years old. Calves in zoo populations are even less likely to survive.

“Experienced grandmothers might be in a pivotal role in increasing the survival prospects of calves as well as female birth rates in zoos,” said Academy Professor Virpi Lummaa. “Conservationists and captive population managers could potentially boost the elephant population by simply starting to keep the grandmothers with their offspring.”

Another issue this highlights is the importance of reducing poaching. Poachers usually target the older elephants, those with the largest tusks. Grandmothers included. In light of this new evidence for the importance of elephant grandmothers, they need protection more than ever to ensure the survival of this species.

The grandmother hypothesis has not yet been studied in many species. Evidence is seen in orcas, primates, birds, and even some invertebrates, but the genetic relationship is often not confirmed, making predictions difficult.

The results are not enough evidence to suggest this is why some long-lived species evolve menopause but it gives weight to the theory. The authors suggest investigating the same effects in African elephants that share the same family dynamics and life history.