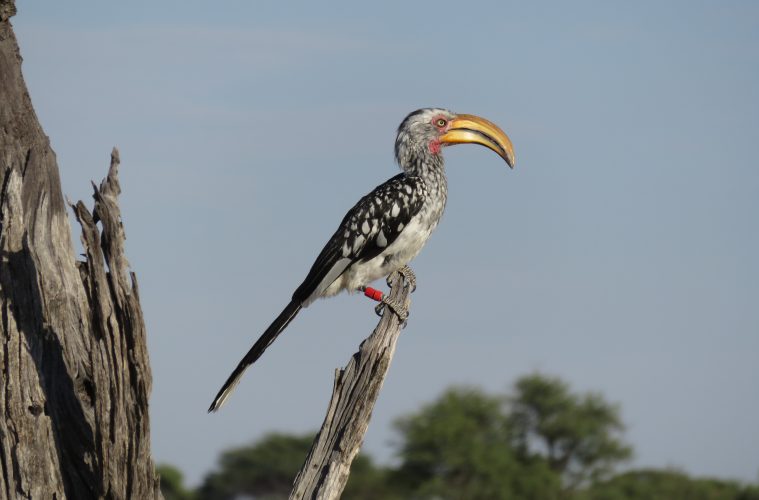 When summer temperatures soar past 40°C in the Kalahari Desert of Southern Africa, birds have to find a way to avoid overheating. A new study demonstrates how southern yellow-billed hornbills (Tockus leucomelas) use their large beaks as radiators to shed body heat. As the desert bakes, the hornbills stay cool.

In the world of birds, beaks come in a staggering variety of shape, colours and sizes; all suited a particular diet and way of life. Recently, studies on large beaked species such as toucans have shown these enigmatic structures may also be important for the regulation of body temperature.

Similar to toucans, the southern yellow-billed hornbill has a disproportionately large beak for its size. A team led by Tanja van de Ven of the Percy FitzPatrick Institute of African Ornithology, (University of Cape Town) hypothesised that this species would also make use of non-evaporative heat loss strategies. Non-evaporative heat loss would be particularly important for species living in arid environments such as the Kalahari, where conservation of water resources is critical.

To test this prediction, van de Ven and colleagues tracked heat loss using thermal imaging in 18 wild-caught southern yellow-billed hornbills while raising the air temperature around them. The hornbills’ beaks were found to account for between 8 – 20% of their total non-evaporative heat loss.

“We have found that, like toucans, hornbills can use their beak as a controllable thermal radiator,” said van de Ven. “We think this might provide an advantage in the arid Kalahari by reducing the amount of water the birds need to spend on evaporative cooling.”

The benefits of non-evaporative heat loss through the beak may vary according to habitat. For example, in a tropical forest where toucans typically occur, panting may not be an effective cooling strategy as evaporation is limited by high humidity. Heat loss from the beak in this case would be a more effective strategy. For a hornbill living in the dry Kalahari, panting means losing valuable supplies of moisture, and non-evaporative heat loss provides a less costly way to reduce body temperature.