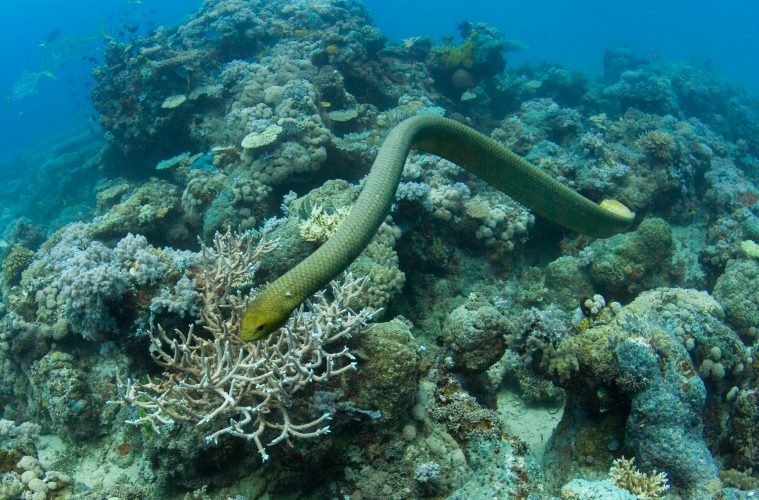 Sea snakes are certainly amongst the most extraordinary reptiles – only a few reptile groups have succeeded in adopting an entirely marine existence, and sea snakes are the most abundant and diverse amongst them. How have they so successfully transitioned between these two different existences?

It appears sea snakes rose to the challenges of aquatic life magnificently – since they first slithered into the oceans, between 9 – 20 million years ago, they’ve evolved a number of incredible marine adaptations, including a paddle-shaped tail and a potent venom.

But perhaps more important is how sea snakes sense the world around them – snakes rely enormously on various senses to successfully hunt and avoid predators – vision, hearing and smell are all essential for terrestrial snakes. However, moving from land to water means light, sound and other stimuli are distorted, and sea snakes have had to adjust their sensory organs accordingly.

Little is known about the senses of sea snakes, but new research from the University of Adelaide has shown how they may have re-purposed their existing specialised sensory scales (called sensilla) to allow them to detect prey and predators moving through the surrounding water – effectively developing a new kind of sense, only possible in an aquatic environment.

Sensilla are tiny protrusions, found on the heads of many terrestrial snakes and lizards. On land their main purpose is detecting objects in the immediate environment via direct contact, making them roughly equivalent to the whiskers of a land mammal. But in water, direct contact with an object isn’t necessary in order to detect it. By sensing the water’s displacement, caused by beating fins or flippers, aquatic animals can precisely locate prey and predators – this is precisely how seals and sea lions navigate marine environments with the aid of their own whiskers.

The researchers at Adelaide looked at the shape and coverage of scale sensilla in 19 species of snake,  covering various degrees of specialisation for an aquatic existence – some being fully aquatic, some only semi-aquatic, and one land species, for comparison.

By making silicon casts of the heads of museum specimens of these species, and using specialised computer software and microscopy techniques to automatically identify sensilla, the researchers could compare the sensilla accurately.

According to lead-author of the study, Jenna Crowe-Riddell, they found the sensitive scales had undergone a number of changes to better suit this function: “We found that the scale sensilla of sea snakes were much more dome-shaped than the sensilla of land snakes, with the organs protruded further from the animals’ scales, potentially making them more likely to be able to sense vibrations from all directions. We also found that scale sensilla on some of the fully aquatic snakes covered a much higher proportion of the scales’ surface.” As well as finding sensilla were more dome-shaped, the extent of sensilla covering the head was greater in aquatic species.

Although a fascinating insight into the poorly-understood sea snake’s biology, the researchers believe this discovery may also herald bad news for sea snake populations. If sea snakes are sensitive to underwater vibrations, then it is possible they may be disturbed by certain human activities – such as boat traffic.

Whilst it appears there’s definitely a strong relationship between the shape and extent of sensilla and aquatic lifestyles, the next step for the researchers is to figure out exactly what sea snakes can sense with them.

“If they are hydrodynamic tactile sense organs, as we suspect, then by comparing them to the scale sensilla of closely related land-snakes we can start to understand how evolution has changed these organs from direct-touch sensors to distance vibration-sensors that work underwater.” says lead scientist, Dr Kate Sanders.