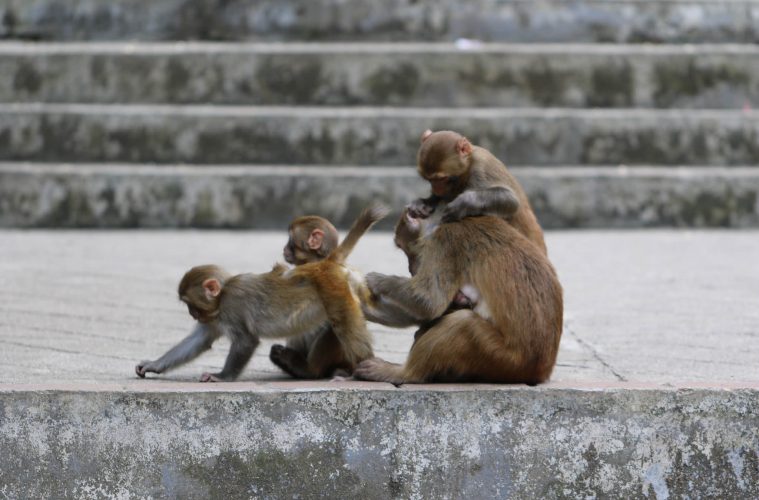 Social competency is crucially important for survival in complex animal societies. Successfully finding food, or mates, may well depend on how well an individual interacts with its neighbours. But how, and when, are these advanced social skills acquired? Cast aside your Debrett’s Guide to Etiquette; the key, it seems, lies in infancy.

Researchers at the Eunice Kennedy Shriver National Institute of Child Health and Human Development, in Maryland USA, have shown for the first time that face-to-face interactions between mothers and infants can have long term effects on an infant’s later social behaviour. Studying rhesus macaques (Macaca mulatta) in both semi-natural and captive settings, Amanda Dettmer and colleagues found that infant monkeys experiencing greater levels of mutual gazing from caregivers in the first month of life were more sociable up to five months after birth.

Using a dual approach, combining observational and experimental work, the researchers set out to establish how strongly face-to-face interactions influence the developmental trajectory of social behaviour. Firstly, in a five-acre Maryland field station, they capitalised on existing natural variation in levels of mutual gazing between mother-infant monkey pairs, and related this to measures of sociality.

“We discovered that infant monkeys whose mothers engaged in face-to-face interactions with them more frequently in the first month of life were more sociable later in infancy and into monkey ‘toddlerhood’,” Dettmer explained to Biosphere. “They spent more time in social contact with other monkeys, and they initiated more social interactions like playing and grooming.”

The eyes have it

This result, however, could be driven as much by physical contact between mother and infant as by specific facial interactions. To rule this out, the team next raised infant macaques in a nursery and experimentally manipulated the level, and type, of human caregiving they received.

The researchers found that, compared to infants receiving increased handling alone, infants that additionally received face-to-face interactions went on to show greater preference for social over non-social stimuli, and spend more time interacting with their peers. This approach, reasons Dettmer, demonstrates that the increased sociality displayed by young monkeys in the field “was not driven by increased handling by the mothers, but by the face-to-face experiences.”

Given the documentation of equivalent face-to-face interactions between human mothers and infants, Dettmer says this study “underscores the value of studying non-human primates as models for human development”. Indeed, Dettmer’s findings lead her to speculate that an increased level of face-to-face interaction between at-risk infants and caregivers, such as children born to high-risk parents, may be beneficial for their social development later in life. “Of course, this type of potential intervention requires systematic study,” says Dettmer.

For a long time human mothers were considered to be unique in engaging with their infants via face-to-face interactions. But in 2009, the laboratory behind this current study discovered that rhesus macaques interact in this way, too. Now, ironically, this non-human primate species in which facial interactions were previously overlooked could be well placed to provide us with valuable insight into our own social development.

Discover the story behind the research through the scientist’s eyes, subscribe to Biosphere digital magazine for access to in-depth articles that bring the natural world to life. See an example issue here.