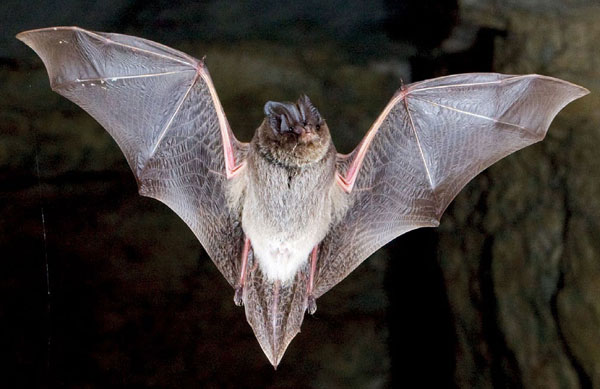 Road networks may allow us to get from one place to another quickly and safely, but for many animals they are a dangerous barrier, often proving fatal – the sight of an unfortunate badger, rabbit or fox lying dead on the roadside is a regular occurrence in the UK. Until recently we were less aware of the threats roads pose to another group of animals: bats. New research suggests that these nocturnal hunters could be seriously threatened by road developments.

Researchers from the University of Exeter highlighted bat-car collisions as a major concern, with many fatalities recorded across Europe. Unsurprisingly, low flying species are more at risk than high flying species. Juveniles are also thought to be more vulnerable because of their relative inexperience with orientation, vehicles, and lights. Males are most likely to be involved in collisions as they are often pushed into less favourable habitats, whereas the females group in the prime breeding sites away from roads. Mortality tends to peak during the times when bats are most active: mating and swarming seasons of each species, or during migration to winter roosts.

Roads also pose a major barrier to movement. The study showed that bats were often reluctant to cross these dangerous lines that divide their landscape.  With their habitat scarred by the road, important hunting and breeding areas tarmacked over, and their roosting sites divided, it’s no wonder bats are particularly sensitive to the loss and fragmentation of their habitat.

These findings raise clear cause for concern. Pipistrelle species of bat accounted for 35% of collisions, but rare species such as barbastelle (Barbastella barbastellus) and horseshoe bats (Rhinolophus species) were also affected. As bats general have only 1-2 offspring per year, even a small increase in mortality could drastically impact their populations.

“Because bats and their habitat are now highly protected throughout Europe, we might think that there is no cause for concern, and there has been widespread media interest in the public money spent on ‘bat bridges’ and acoustic surveys for bats.” said Dr Fiona Mathews, Associate Professor of Mammalian Biology at the University of Exeter. “Unfortunately these measures are often more of a box-ticking exercise than a means of offering real protection.”

So what can be done to curb further conflict between road development and bat protection? Further research is warranted to explore potentially negative factors:  street lighting and road noise may disturb bats, and reduce the likelihood that they cross.

A major challenge is to increase the permeability of roads to bats, while decreasing the amount of collisions. “For example, tree lined minor roads posed less of a barrier to the movement of bats, but also increased the risk of collision with vehicles.” said Dr Mathews. “Closed tree canopies might therefore encourage the bats to fly higher and remain safely out of the path of oncoming traffic.”

For larger roads, Mathews suggests that alternative routes such as green bridges and under-road passes should be explored. These would not only allow a safe passage for bats, but also myriad other wildlife – perhaps it isn’t just zebra and pelican crossings that should be installed on new roads – but bat, badger, deer and hedgehog crossings too!