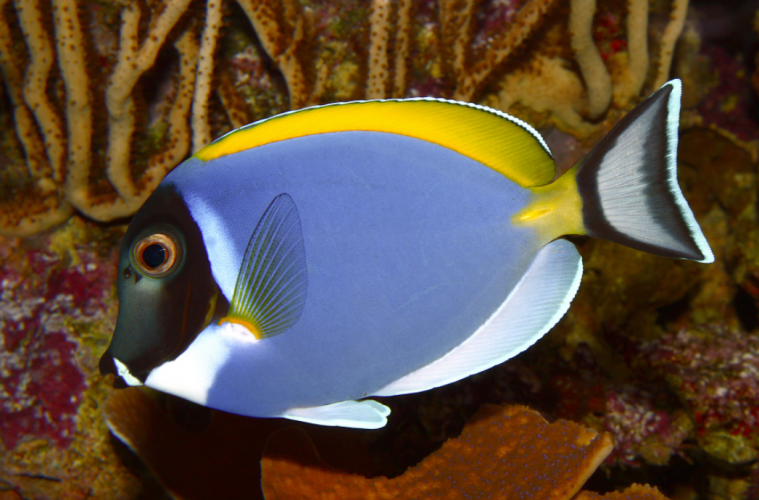 What do savannah cats, killer bees and the trusty mule have in common? They are all hybrids: the result of two different parent species interbreeding. Although these fairly familiar hybrids are usually the consequence of human intervention, hybrids can and do exist in the wild. Marine fishes, for example, are especially prolific hybridisers, with 173 marine fish species know to pair up with species other than their own. However, the hybrids of closely related species can be tricky to identify in the wild and in such cases molecular techniques can help to uncover exactly what underwater encounters have been taking place.

This is precisely the approach employed by researchers at Curtin University in Australia, who have confirmed the existence of hybrid coral reef fishes in the Indo-Pacific. Joseph DiBattista and colleagues have found that two species of colourful reef fish, the Indian Ocean dwelling powder blue surgeonfish (Acanthurus leucosternon) and the Pacific Ocean inhabiting goldrim surgeonfish (Acanthurus nigricans), have been interbreeding in overlapping areas of their ranges. The sites where these amorous encounters take place are known as suture zones, and these species have been rendezvousing at the Christmas and Cocos-Keeling Islands suture zone in the eastern Indian Ocean.

DNA analyses suggest that these two species became separate 600,000 years ago, as glaciation-induced sea level changes physically separated the two species. However, with the subsequent disappearance of glaciers and consequent sea level rises, the two species have since become free to mingle once again. The result is hybrid offspring that are intermediate in colouration between the powder blue and the goldrim surgeonfish species.

While the Achilles surgeonfish has remained genetically very different from its goldrim sister species, the white-nose and goldrim surgeonfishes are genetically very similar. So similar, in fact, that DiBattista and colleagues speculate whether they should be considered separate species at all. Intermediate between these extremes is the powder blue surgeonfish, for whom genetic similarity with the goldrim depends on proximity to the suture zone.

So, unlike the dependable but invariably infertile mule, evidence from this study suggests that surgeonfish hybrids are anything but an evolutionary dead-end. Rather they act as fertile underwater mules smuggling genetic material through the world’s oceans.