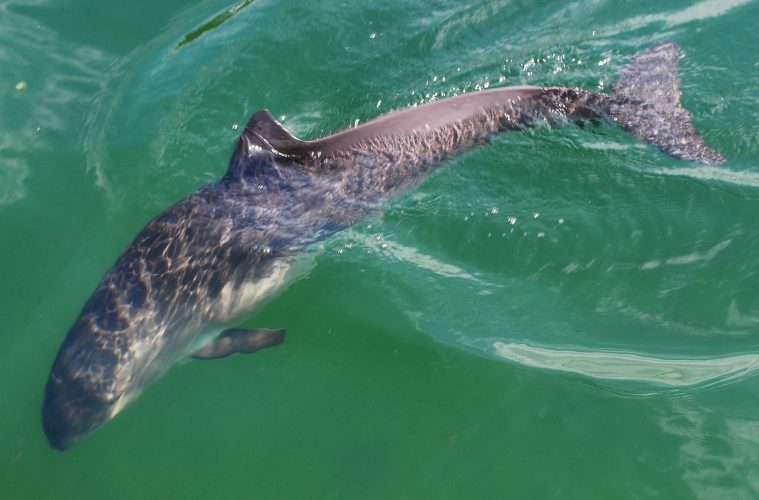 The amazing efficiency of the harbour porpoise

The harbour porpoise (Phocoena phocoena) may be one of the northern hemisphere’s smallest cetaceans, but compared to some of their larger counterparts, they punch well above their weight. New research published in the Cell Press journal Current Biology, reveals that the harbour porpoises are amongst the world’s most accomplished hunters, catching as many as 3,000 fish per day.

Due to their small size, harbour porpoise’s lose heat rapidly to their cold ocean environment. As a consequence, these fast-paced cetaceans need to remain constantly fuelled up to produce enough energy to maintain their body temperature. It is thought that to achieve this they must eat up to 10% of their own body weight in fish every day.

A team of researchers from Denmark, Germany and Scotland set out to discover how harbour porpoises survive on this energetic knife-edge. To study the animal’s feeding behaviour, the researchers attached high-resolution movement and prey-echo recording tags onto five wild porpoises. Attached via a suction cup near to the blow hole, these innovative miniature computers tuned into the porpoise echolocation calls, allowing the researchers to determine feeding rate, feeding success and prey size.

Porpoises use a series of low level, rapid clicks (or buzzes), to close in on their prey. Buzzes can be up to 500 per second, enabling the researchers detailed visualisations of prey encounters. “This is the first time we have been able to measure simultaneously how a marine mammal hunts and how often it is successful,” comments Danuta Wisniewska of Aarhus University in Denmark.

Echograms were formed from the data collected, and analysed by trained assessors. An echogram is a graphical representation that give the assessors a picture of the auditory scenes experienced by porpoises as they hunt.

Incredibly, the echograms revealed that harbour porpoises can gorge on up to 550 small fish per hour, feeding day and night to survive.  Even more amazingly, they are markedly precise, successfully snatching their prey over 90% of the time. “We were surprised by the efficiency with which these small predators feed,” Wisniewska says.

However, the discovery of this behaviour raises questions about the future survival of harbour porpoises. The porpoises share busy, shallow coastal water with us, but unfortunately moderate disturbance from fisheries could threaten these spectacular ocean hunters. Failure to acquire sufficient energy can lead to a serious decrease in fitness, and even starvation. The study concludes that the effects of anthropogenic disturbance and changes in marine ecosystems should therefore be prime topics for future research.