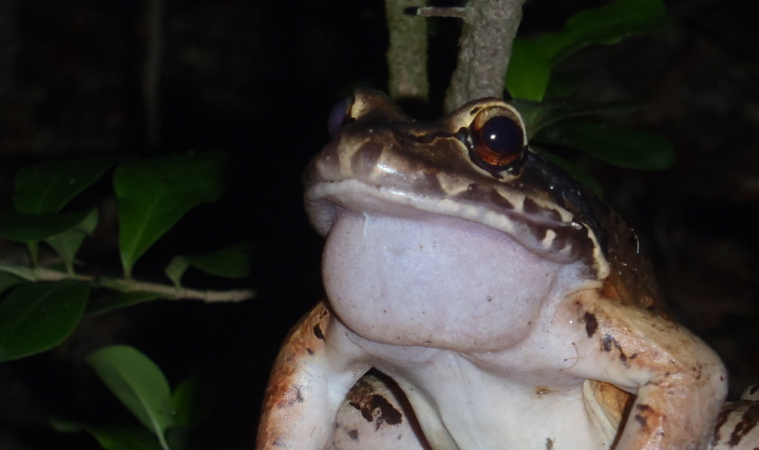 The last two Montserrat ‘mountain chicken’ frogs could save their species

The “mountain chicken” frogs on the Caribbean island of Montserrat are in a perilous and seemingly irredeemable situation. It’s worth questioning whether attempted recovery is even worth the effort. After all, this species, one of the world’s largest frogs, will have to recover from just two individuals.

Hunting, habitat destruction from the 1995 volcanic eruption, and the arrival of the recent fatal fungal infection, Chytridiomycosis (or “chytrid”), has devastated these frogs.

Rarely has any species naturally recovered once reduced to a few individuals, without some sort of human assistance. The Seychelles kestrel is one exception. Species declines are largely caused by human activity, whether that be through direct killing, destruction of natural habitats, or the introduction of species like cats, rats or the chytrid fungus.

The lack of action in these cases was caused by bureaucracy, aversion to risk, politics, misplaced priorities, and professional bias; human rather than biological factors. Thankfully, other examples demonstrate a better way.

Bringing a species back from near-extinction

North America’s black-footed ferret was thought lost in the 1980s until several were discovered in Wyoming, which inspired a recovery programme. The California condor was reduced to 27 individuals sparking a controversial, but successful, captive-breeding initiative. In New Zealand, the Chatham Islands black robin was rescued from a single breeding pair.

On Mauritius, once the island of extinction, the local kestrel was considered a lost cause until the arrival in 1979 of Carl Jones, a biologist who has just been awarded the Indianapolis Prize – the “Nobel Prize” of conservation – in recognition of his outstanding work.

These cases required pioneering innovations, such as double-clutching (removing eggs to encourage pairs to breed again), using more common species as adoptive parents, and training captive-bred animals for wild release. Leaders such as Don Merton, Tom Cade, Noel Snyder and Carl Jones shared ideas with like-minded colleagues across continents, fuelling knowledge and experimentation. Actually getting on with the work is important. For Jones, too many people “talk about conservation…but we’ve got to do it rather than talk about it”.

Rare species are not just an interesting entry in the catalogue of life. They have a function in the natural world. Amphibians are important in controlling insects and other invertebrates. In Montserrat, for instance, some farmers have noticed increased levels of crop pests since the frogs disappeared.

In practice, action first means setting short-term goals. For the mountain chicken frog, this involves moving the female into the male’s territory, building artificial nests, and protecting locations from threats.

The work must also pursue a long-term vision. A sustainable wild population of frogs means that captive-breeding, already undertaken in bio-secure facilities, is not the sole answer. Threats like chytrid need to be understood first to inspire possible solutions. The disease will not disappear just by increasing the numbers of frogs (though frog population is of course critical).

Fieldwork requires painful attention to detail, literally sitting with the animals to prevent disturbances, then monitoring offspring survival, assessing and carefully improving habitats, and moving individuals to new, safe locations. Conservationists need patience and determination to overcome disappointments. They must seek to understand changing circumstances, keep open to ideas and be willing to develop new approaches if things do not go well.

These achievements are not a mere drop in the ocean. His results represent 19% of avoided bird extinctions worldwide. Overall this is nearly 10% of all bird, mammal and amphibian species downlisted on the IUCN Red List. Jones’s international recognition is richly deserved.

Jones himself suggests that recovery requires about 20 breeding cycles. That means 20 years for species that breed just once a year. Improved understanding can however, accelerate recovery.

Recent efforts in the US with the California Channel Islands fox restored a handful of surviving individuals to a thriving population in just a decade. The near-extinct Mauritius kestrel bounced back to a free-living population from just four birds. India’s unique pygmy hog was reintroduced after successful breeding of a few animals taken from the wild. Conservation is getting smarter and more effective.

So on Montserrat, people must act fast while hope remains. A sustainable frog population must be a priority. If people carefully use their knowledge, this extraordinary giant, the mountain chicken frog might withstand threats of disease and habitat pressure on its tiny, volcanic island home.