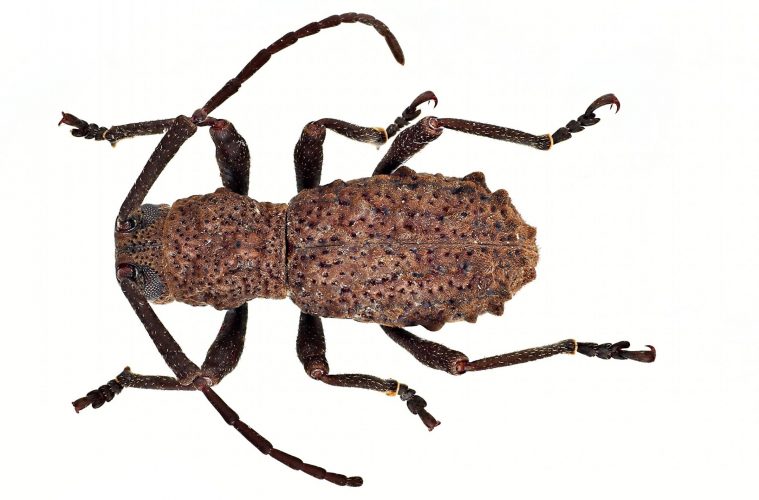 In the insect world it is common to find females laying their eggs and promptly leaving them to develop and hatch on their own. No parenting awards for them, perhaps, but the strategy does work. In a few very rare cases, however, females actually retain the eggs inside their bodies until the young insects hatch out, and so ‘give birth’ to live young. This is known as ovoviviparity. A new study from Palacký University, Czech Republic, has discovered this rare strategy in a species of long-horn beetle from Borneo, a first for these insects.

Long-horn beetles (Cerambycidae) are one of the largest beetle families, with an astonishing 35000 species known world-wide. And that’s just so far. In the northern mountains of Borneo, a biodiversity hotspot, wingless long-horn beetles had previously been discovered and described, but then left untouched and unstudied for over 60 years. These beetles of Borneo were small and flightless, living in the leaf litter that carpeted the floor of the island’s forests. Perhaps this is why so few have been collected over the years, and almost nothing is known about their lives, reproduction or ecology.

This oversight has now been partially addressed, as a team focused on the little-studied beetle group. Museum specimens of long-horn beetles gathered in Borneo were re-examined in great detail, and the result was the discovery and description of three genera and four entirely new species of long-horn beetles. It seems that the enigmatic long-horn beetles that inhabit the wilds of Borneo may be more diverse than anyone expected.

“During a dissection […] we found out that two females contained large larvae inside their bodies,” says Gabriš. “This phenomenon have been known in a few lineages of the related leaf beetles, but this is the first case for the long-horned beetles.”

Until now, ovoviviparity had been described in only a few unrelated beetle families. However, given how little is known about the life and reproduction of most beetles, the authors speculate that ovoviviparity may actually be more common than expected. Who knows what further surprises await as future studies reveal the private lives of the world’s beetles.