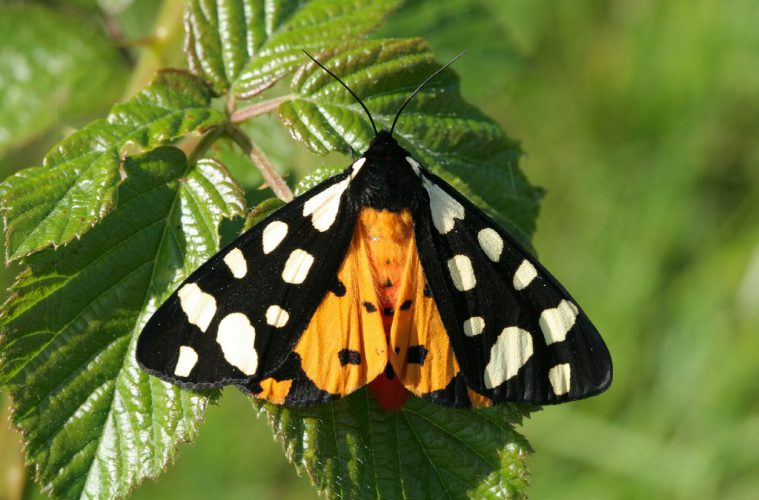 An arms race between bats and moths has been raging for over 65 million years. As bats become more adept at catching their prey, embattled moths have to counter with survival strategies of their own.

The evolution of echolocation gave bats a great tool at their disposal, a biological sonar allowing them to track and catch their prey with pin-point accuracy. The moths responded – super-sensitive hearing evolved, a trait that allowed them to detect the tell-tale calls of the bat, whilst, over time, also becoming experts in aerobatic evasion themselves. Recent research at Wake Forest University has demonstrated yet another trick that tiger moths have developed in their bid to survive, and it all stems from some acoustic trickery.

These moths possess a sound producing structure known as a tymbal organ, allowing them to send out a series of high-intensity clicks. But what exactly is their purpose? It has been shown that some species are able to produce clicks that act as a sort of jamming signal, disrupting the functioning of the bats’ echolocation. Other laboratory based experiments have demonstrated that in some species these signals are designed to act as a warning, letting the bats know that the moth is toxic and the bat should look elsewhere for its next meal.

Nick Dowdy and his colleagues have now assessed this predator-prey relationship in its natural environment, out in the field. “The signals are, in essence, a warning to the bats that the moth is unpalatable and potentially harmful if ingested by the bats,” Dowdy said.

Dowdy used two species of tiger moths in his study, Pygarctia roseicapitis and Cisthene martiniand, and recorded how they responded to the echolocation calls of the bats. They were able to show for the first time that these signals are actually emitted by the moths in nature, confirming what had been seen to occur in the laboratory. The researchers also found evidence of a ‘nonchalance continuum’, meaning that the moths did not always revert to evasive manoeuvres upon hearing the call of the bats.

“We’ve found that this is only sometimes true in tiger moths and different species appear to use these behaviours at different rates,” said Dowdy.

It seems that these moth species are able to rely on their warning signals alone to deter the bats, avoiding having to perform elaborate dives to evade deadly attacks, which no doubt saves them valuable energy.

This kind of acoustic warning system is likely to be the ancestral function of sound production in tiger moths. “This means that in evolutionary history these moths first evolved these sounds for use in warning bats of their toxicity,” said Dowdy, “and then sometime later, these sounds grew in complexity in certain species to perform a sonar jamming function.”

It looks like this particular war between predator and prey will continue to rage on for years, but these tiger moths seem to possess one weapon in their arsenal that has given them an edge in the fight for survival, for now at least.