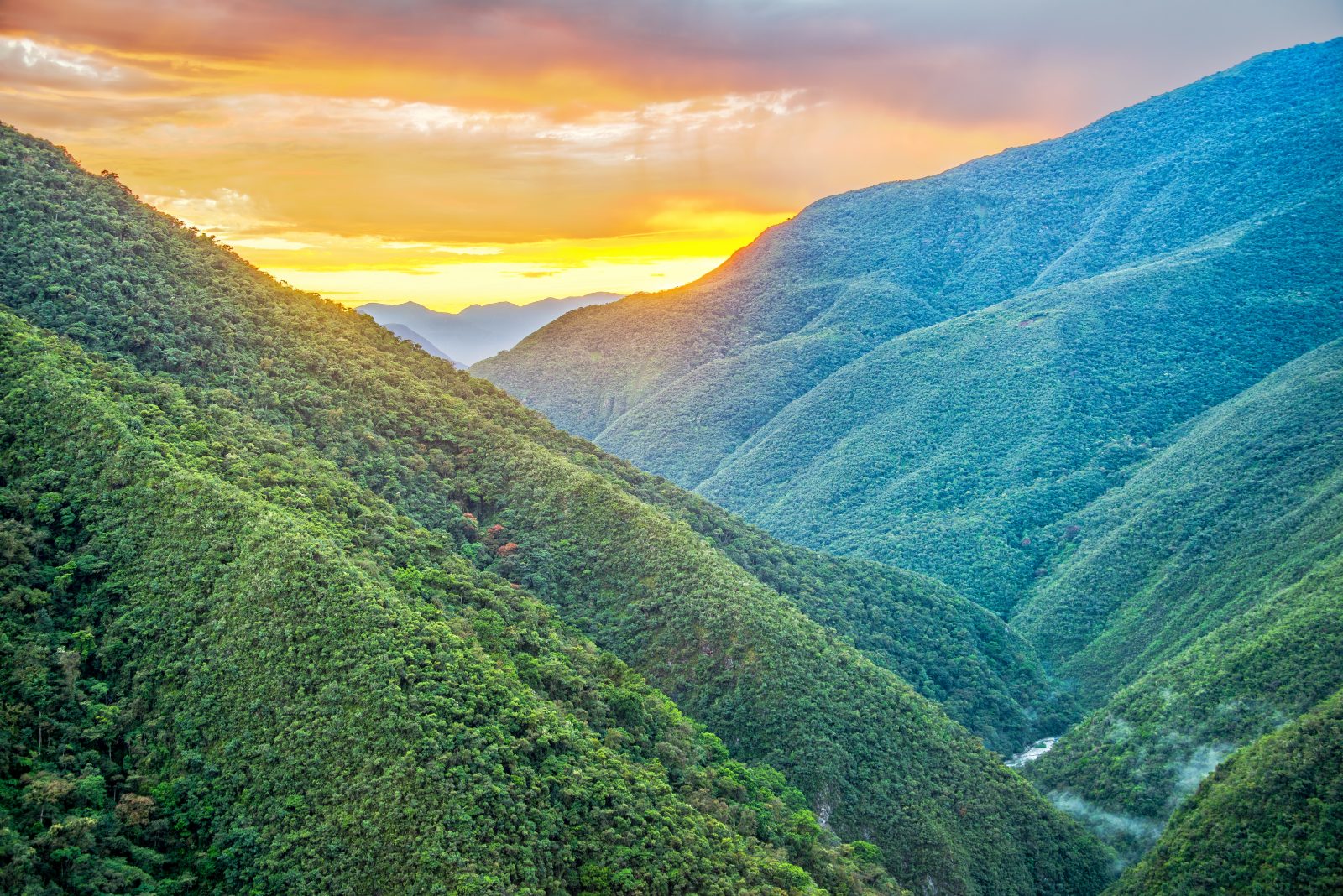 As I walked around the network of small overgrown lakes, I could already see the next mist net. The 12ft long horizontal net, with mesh too fine for birds to see, happily stood poised against the dying afternoon sun. But like the ones before it, it was disappointingly devoid of birds. Ignoring the slow start I trudged on, wellington boots melodically slapping the muddy bank. I had to concentrate to navigate through my obstacle course; ducking overhanging branches, dodging inch-long bamboo thorns. My shirt, still saturated from the midday heat, clung to me in increasingly awkward positions. A brilliant flash of gold startled me, pulling me out of my reverie. It was a big, intriguing bird that had exploded from cover and was now heading in the direction of my next net. My heart lightened immediately and I continued on. I was working in a remote part of the Peruvian Amazon as a research assistant for the Manu Bird project. Run by the University of British Colombia, it is a long-term study of the ecological factors that maintain the range limits of tropical birds across altitudinal gradients. Right in that moment, I was attempting to catch another ‘interesting’ bird for the metabolics component of the project.

As I approached the next net I realised it was moving – the giveaway sign that something had been caught without yet being able to determine what it was, hidden by the surrounding undergrowth. I leapt towards it, plunging into the lake, I called in the team: a ‘WOOP!’ tearing from my throat as I sloshed forwards. Tangled from beak to claw in the mist net, I scooped up the suspended bird in the ringer’s grip that has by now become second nature to me; a kind of cradle created by your hand that goes over the back of the bird and controls the neck and wings. Slowly, I teased the net away first from the feet, then the wings, and lastly releasing its beak – which was ferociously trying to drum a hole through my finger. My colleague appeared panting and wide-eyed at my side – having heard my call he had come running and he then stood there, tentatively balancing on submerged vegetation, grinning from ear to ear. With the bird safely out of the net, we both stared at the culmination of the day’s work. The cream-coloured woodpecker was peering back at us – arguably more yellow than cream, but mysteriously, to my nose smelling of custard. With a massive grin of my own, I allowed myself the briefest of moments to regain composure, before carefully placing the bird into a material bag in which it would remain calm. We had done it.

I was working in the impressive Manu National Park. With over 1,000 bird species – more than a tenth of the globe’s population, it is one of the most avian rich places in the world. This is in no small part due to the mountainous topography that the rainforest is formed on. Peaks can reach 3,400m, giving rise to a mosaic of habitats ideal for promoting diversity; from the stunted twisted forests smothered in moss near the summit, to the vast lowland varzea jungle – flooding seasonally from surrounding rivers. But what determines the altitude that the inhabitants of this area can survive at? Why can some species be found across an entire gradient, whilst others are confined to a narrow band? The Manu Bird Project is trying to shed light on these questions.

The project has been running for 4 years now, and utilises the impressive backdrop of the Manu national park to its advantage: 3 field sites each at a different altitude allow the team to compare hundreds of birds along the entire gradient. From a combination of historic ranges, and the current distribution of appropriate habitat and resource types, we know a species ‘fundamental niche’ – where it should be occurring. During the season, the field crew collect 3 main cohorts of data, which when combined help to explain the birds ‘realised niche’ – where they are actually occurring, and what role they actually play in the ecosystem. We look to find out where the birds live, both in which habitat and at what altitude, in contrast to their fundamental niche. Then we need to find out why. If they are not present in areas they could inhabit – why not? Are competition or predation levels too high? Do the costs of maintaining body temperature at a higher altitude outweigh the benefits of living there?

My job was catching birds for the metabolic experiment, consisting of strong, fit adult birds that would not become stressed easily.  I would target specific species that the study would benefit most from; ideal birds were those that had only been measured a slim few times, or not at all before. For example, the cream-coloured woodpecker was an ideal bird for the experiment: the species usually stays high in the canopy, not coming into contact with our mist nets, so it hadn’t been caught before. This was the really exciting bit of my role in the research team – getting completely new data for a long-term project. The bird would then enter a chamber where the pressure and temperature levels would be controlled, replicating the conditions the birds would experience at different altitudes. By measuring the rate of oxygen consumption you can begin to understand what conditions the birds can tolerate and if they could thrive at different altitudes, or if it would be too much work.

If a lowland species uses more oxygen while in environmental conditions replicating that of a higher altitude when compared to those it usually inhabits, then this could show that the bird has to use more energy and undergoes higher levels of stress trying to deal with higher altitude. This cost could explain its altitudinal range, it could be that the bird simply cannot cope as well at higher altitudes and therefore is restricted to the lowlands.

This is what it was about for me, that pure excitement of the unknown.

Using an arsenal of measuring equipment we also take readings to describe the birds physical characteristics and work out their age and sex. These basic factors are essential in most scientific studies. Back in the UK, I take the availability of this kind of knowledge for granted – we have comprehensive literature on all birds you might encounter when working in the UK, and all in a few books. However, out in the diverse and comparatively understudied tropics, we had to work a lot of the characteristics out for ourselves. Although the challenge was enjoyable we had to revert to the basics and had many discussions before we had all agreed. The level of feather moult, skull growth and feather shape were indicative of the birds age. In sexually monomorphic species, where plumage of both male and females was the same, it was the presence of sexual characteristics that we would use to tell them apart, such as the development of a brood patch in females. There was just one field platform for the researchers to share

Working at an isolated Amazonian field site was inspiring, but tough going at times. For me it was not so much the crippling heat and humidity, mouldy food, soggy feet and rice for 3 meals a day; I was already aware and mentally prepared for that. What got to me was the relentless barrage of insects. I knew they would be bad, they were just infinitely worse than what I was expecting. The worst, without doubt were the ants – you couldn’t sit down in the forest – wherever you were they would find you. Those smaller than a pinhead could make your whole back numb when you were bitten by just one. The kneejerk reaction of brushing them away was even a risk – half the culprits would pierce your fingers with their spiky armoured carapaces, and others would coat your fingers in chemicals – smelling so rancid they made our Amazonian weathered armpits seem pleasantly perfumed. There was one other critter that I had a slight problem with. I was bitten by a monkey. Not just any monkey either, a tiny, fluffy saddleback tamarin – the cute innocent looking primates we would see on a daily basis around camp. In hot pursuit of a hummingbird, this one got itself entirely tangled in one of my mist nests. Whilst trying to prevent a tamarin-induced hummingbird death, I got a fang through the thumb. This led to a quick get away from the field site to seek preventative rabies treatment – just in case. But despite the angrier animals, the less intrusive wildlife made it all worthwhile.

One of the most exciting aspects of the work was discovering completely new ecological information as a by-product of the research. This is what it was about for me, that pure excitement of the unknown. Of waking up with the sun still in hiding and completely exhausted from the night-hike a few hours before, but you realise the joy of your work. What am I going to see today? Will anybody else have seen it, or even heard of it? Sure, the answer to the latter was yes most of the time. But often we discovered information completely new to science, and that brought a sense of affirmation for us.

My favourite example was finding a species completely out of its known range. We caught olive-spotted hummingbirds on our river island, a staggering 1000km south of where you would expect to find them. This may seem like a ridiculously large distance to have not been known before, but if we must consider that the bird in question is only 4 inches long, with at least 2 extremely similar species to get confused with and some of the most inhospitable and inaccessible places in Peru across this new 1000km distance. Is this just the natural range of the bird, previously overlooked? Is the bird actually doing pretty well for itself and undergoing natural range expansion, or was the bird forced south, away from the threats of deforestation or climate change? The truth is we just don’t know yet.

The olive-spotted hummingbird was not a one off. Sometimes we pushed ourselves so hard that days off would be harder going than our daily duties. On one such day we didn’t feel like we’d had our fill of excitement so continued adventuring through the heat of the day. With sweat dribbling from every inch of skin and so much sun cream applied that you could taste it, we had reached our limit. But typically it was then that we hit the jackpot. 9 Brazilian teal, described as an ‘accidental migrant’ to Peru had visited us far from their usual range in Bolivia. It is likely that the preceding dry season, particularly lacking in water, left the birds travelling much further than usual. This is why working in the tropics is so inspiring – at every turn there is something new. How much is still to be discovered?

Fraser Bell currently works for the University of Oxford’s Edward Grey Institute for Ornithology. He holds an MSc in Applied Ecology from the University of Exeter’s Cornwall Campus. Fraser has been a ringer for 6 years, but still won’t admit to being a twitcher.

This article appeared in Issue 4 of Biosphere Magazine. Biosphere provides a platform for the scientists behind the research to tell their stories.