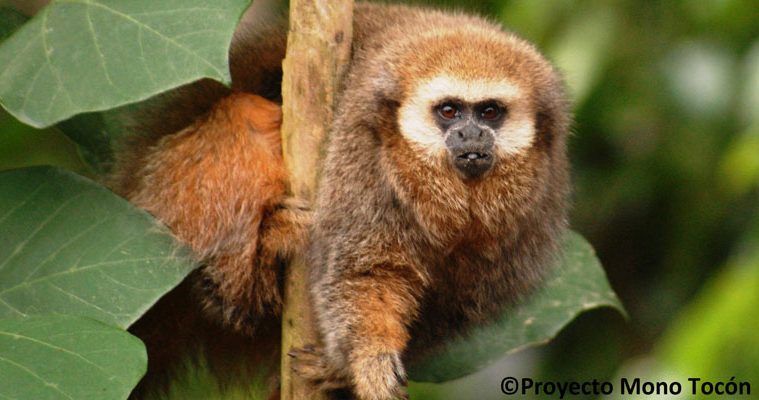 Technology and biodiversity haven’t always had the greatest of relationships. Generally speaking, as technology has advanced it has made life easier for people. When life gets easier, people multiply and spread to new areas, and this rarely works out well for the local wildlife. But, the tide may be turning as new tech is increasingly aiding scientists and conservationists in their efforts.  Technology is at last giving back.  One great example comes from Peru, where new habitat mapping software and satellite imagery have been helping to save the critically endangered San Martin titi monkey (Callicebus oenanthe).

Titis are a genus of monkeys native to the forests of Colombia, Brazil, Peru, Bolivia and Paraguay. The San Martin titi lives only in an area of lowland forest, around the size of Northern Ireland, in Peru’s Mayo Alto Valley. This already restricted range has suffered greatly from fragmentation in recent years; with logging, farming, mining and increased human settlement the main habitat loss culprits. As a result the San Martin titi has struggled to survive. An 80% reduction in its population in the last 25 years has seen it added to IUCN’s list of the 25 most endangered primates in the world.

Like all titi monkeys San Martin titis are monogamous breeders and live in family groups. They are highly arboreal and generally travel  600-700m per day, moving from branch to branch across the canopy. Their ability to forage, disperse and escape threats is totally reliant on the connectivity of their habitat. Despite the German name for titis, Springaffen, paying homage to their prodigious jumping ability, they can only jump so far.  Hence, as the habitat of the San Martin titi has become more and more fragmented, its numbers have been decimated.

So what can be done to save this species? A powerful new conservation tool developed at Duke University in North Carolina can help provide the answer. Called GeoHAT, it is a habitat assessment toolkit which can save countless man hours. Used in combination with satellite images and species knowledge (courtesy of locally based Proyecto Mono Tocon), it has  helped quickly identify areas where conservation resources should be targeted.

The study found that around 34% of the lowland forest in the San Martin’s northern range has been lost and that of the remaining forest almost only 8% is protected with 95% now in fragments too small to support viable populations. Fragments with the highest modelled connectivity made up just 10% of forest in the study area. A bleak picture indeed. But knowledge is power, and with this information the team were able to identify a 10km corridor in between two conservation areas where concentrated efforts should yield the best results for the species.

Danica Schaffer-Smith, who led the research team had this to say: “We were able to work with a local conservation organization to rapidly pinpoint areas where reforestation and conservation have the best chance of success. Comprehensive on-the-ground assessments would have taken much more time and been cost-prohibitive given the inaccessibility of much of the terrain.”

Time and resources are at a premium, not just for the San Martin titi, but also for the many other species threatened by habitat fragmentation the world over. How and where to allocate those resources effectively is absolutely vital information for conservationists. The ability to get that information quickly and cheaply may provide a lifeline to numerous species currently living on the brink. In a world of negative headlines, the growing use of technology in conservation science can be a source of great hope for wildlife.