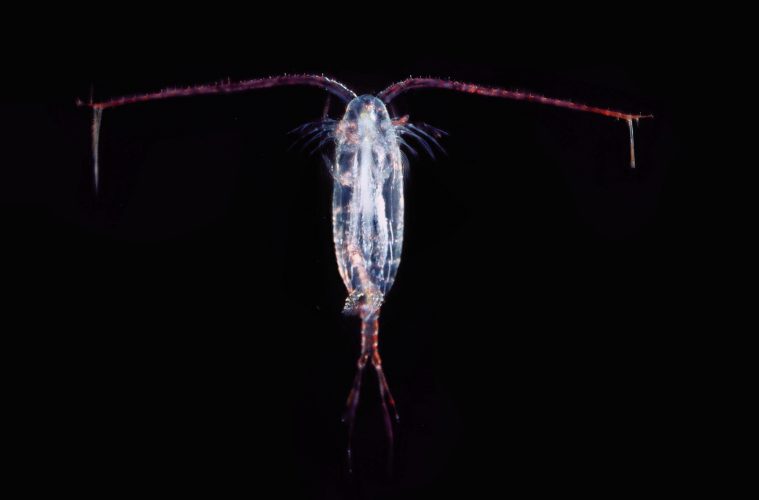 Dive into the Atlanic Ocean off the coast of Maine, USA, and you’ll find tiny creatures called copepods. These 1 mm sized crustaceans, named after their ‘oar-feet’ that they use to row themselves through water, drift en masse through the ocean. The drifting organisms are part of the collective soup referred to as plankton. Along with other microscopic animals and plants, they are the basis of the marine food chain.

Every summer, as the water warms up and the days get longer, something happens to the Maine planktonic soup – it gets soupier. This is thanks to marine algae, microscopic plants that live in water, and like warmth and sun. When conditions are right, the algae start to bloom, proliferating exponentially. A worrying problem with this bloom is that many of these algae happen to be toxic to animals (and people). For this reason, sudden growths are known as Harmful Algal Blooms (HABs).

One of the main constituents of HABs is an algae called Alexandrium. Marine researchers are interested in Alexandrium because the toxins it produces have a dangerous tendency to wind up in the human food-chain. When people eat seafood contaminated with the toxins, they suffer from a nasty, sometimes fatal form of food poisoning known as paralytic shellfish poisoning.

The copepod Temora longicornis is a grazer of these toxic algae. When affected Temora are eaten by another animal, the toxins are transferred up the food chain. During a HAB, the fishing industry in Maine comes to a grinding halt because the catches are unsafe to eat. In the sea, the toxins can also cause the death of large marine mammals, such as humpback whales.

A team of researchers from the University of Maine wanted to find out what how Temora are affected when they ingest the algae Alexandrium. They wanted to understand this interaction, seeing as Temora both control algae numbers by eating them, and at the same time unwittingly ingest their toxins. They collected some Temora with a very fine mesh net and took them back to the lab.

The researchers, led by copepod fan Dr Rachel Lasley-Rasher, fed a group of Temora with the toxic algae (along with a control group that were fed non-toxic food), and watched what happened. They measured their survival rate over four days, their feeding rate, reproductive success and their swimming behaviour. The results caused some surprise amongst the research group. The toxic algae had no discernible effect on Temora mortality, feeding or reproduction. Instead, what they found was that the toxins appeared to make the tiny crustaceans reckless.

For a copepod, swimming is risky activity, but a necessary one. Swimming means that predators can more easily find them, but it enables copepods to gather essential food. When the Temora became intoxicated by their algal meal, they swam faster and straighter. In the open sea, this unexpected behaviour would make them very detectable to hunting predators.

Acting in such a ‘drunk’ fashion may endanger the life of the copepods, but it works to the advantage of the toxic algae as a whole. If more copepods are eaten by their predators, there are less of them around to graze on the algae. This surprise result is a copepod-sized but important move towards understanding the interactions between tiny plankton species, and larger animals higher up the food chain.

Discover the story behind the research through the scientist’s eyes, subscribe to Biosphere digital magazine for access to in-depth articles that bring the natural world to life. See a sample issue.