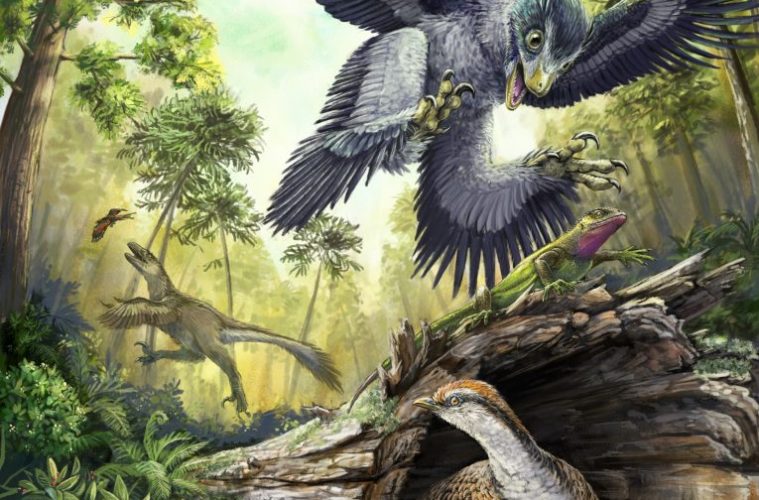 Around 65 million years ago, at the end of the Cretaceous period, a sudden cataclysmic event wiped out almost 50% of all species on Earth, ending the reign of the dinosaurs. How is it that the ancestors of our modern birds survived, while the small, feathered raptors and toothed birds that lived alongside them died out, and how are fossil teeth involved?

A new study suggests that some of the ancestors of modern birds may have survived thanks to their beaks, which allowed them to feed on seeds. The study was led by Dr Derek Larson in collaboration with Caleb Brown and David Evans.

Several recent studies have suggested that the numbers of large herbivorous dinosaurs, such as the triceratops and duck-billed Iguanodon, were in decline towards the end of the Cretaceous period. Larson and colleagues were curious as to whether similar patterns would be found in the early birds and small, feathered dinosaurs, collectively called the Maniraptora, which were abundant at the time. However, these small-bodied species are not well represented in the fossil record, and complete skeletons are rare. This makes identifying species extremely difficult.

Fortunately, though, the teeth of these small dinosaurs are abundant in fossil beds and examining the shape of teeth can indicate the dietary range of their owners. In a recent blog post from his research group at the Royal Ontario Museum, David Evans describes how the authors shifted their focus from species diversity to examining the diets of the Maniraptora in the period leading up to the extinction event.

“This would actually provide us with even more information because we could look at the ecology of their extinction,” Evans writes.

Over the course of five years the authors studied over 3000 fossil teeth to understand how the shape of the teeth and the diets of the Maniraptora were changing during the 20 million years before the end of the Cretaceous. Unlike the larger dinosaurs, the Maniraptora apparently remained abundant right up until the end of the Cretaceous, when they very rapidly became extinct.  But this extinction was selective, the ancestors of modern birds survived, while the feathered dinosaurs and primitive toothed birds disappeared. Why?

One of the most conspicuous differences between most Maniraptora and the ancestors of modern birds, known as the Neornithes, was that the latter group had beaks. While the teeth of the extinct maniraptora suggest a diet based on insects and small vertebrates, the beaks of the Neornithes might have allowed them to feed on plants, and seeds in particular.

Most scientists believe that it was the impact of an asteroid that caused the mass extinction of life on earth at the end of the Cretaceous period. In the years following the impact, with forest fires raging and the sky darkened by debris, seeds may have been a valuable food resource that helped the Neornithes survive the cataclysm.

By examining the family tree of modern birds, the authors showed that seed-eating would indeed have been common among early bird ancestors. Larson and colleagues also looked at modern ecological studies, and observed that seed-eating birds were among the first animals to move back into habitats following forest fires. While foliage and animals might be decimated by a forest fire, seeds survive inside their protective shells, lying dormant and providing food for seed-eaters.

“It’s important to keep in mind that extinction patterns at the end of the Cretaceous are complex and involved multiple factors, and we are not proposing that the only reason crown birds survived was seeds,” Evans writes. “But small teeth have given us big insights into the extinction patterns of bird-like dinosaurs and primitive birds, and a better understanding of how diet might have played a role in the survival of crown-group bird groups in the wake of the asteroid impact.”