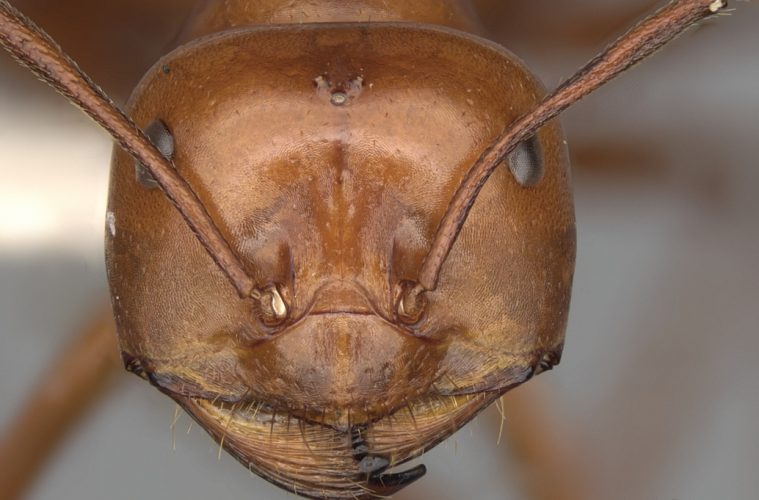 The UV compass of the desert ant.

For a small ant in a big desert, life can be tricky. No less so when it comes to finding the way home. So when desert ants leave their nests, they use a suite of techniques to navigate. New research has highlighted the importance of one of them – a UV compass.

The homing capabilities of ants have been extensively recorded, but the mechanisms behind them are not yet fully understood. One theory suggests the ants guide themselves home by the skyline, using familiar landmarks in their surroundings to find their way back to the nest. However, whilst recognising their environment is an elegantly simple explanation for how they find their way home, it requires them to be able to differentiate between objects, especially between the land and sky.

This isn’t as easy as it might sound for the ants, as their vision is relatively basic. It has been speculated that the desert-dwelling red honey ant (Melophorus bagoti) of Australia uses differences in light spectra to determine what’s made of sky and what isn’t. The light from the sky contains a high amount of UV, of which very little is reflected back by the earth. Similarly, the earth around them reflects high levels of green light, considerably higher than that which comes from the sky. The red honey ant has two light-detecting receptors in their eyes, one that is sensitive to green light, and another that is most sensitive to UV light. Ants are able to see light outside the visual spectrum seen by humans, and so, unlike us, they are able to see UV light. Scientists therefore pondered that red honey ants may use differences in light to discern earth from sky.

To test this, the researchers observed ants moving between a food source and back to the nest. They then repeated observations after enclosing an area in a UV blocking plastic. This material caused a drastic reduction in UV light in the ant’s locality, and the result was that the ant became thoroughly disorientated – the removal of the UV light stimulus dramatically decreased the subject’s ability to find its way home. In fact, in one experiment, the ants would wander off almost 180o in the wrong direction. Not ideal. So, this study provides a good deal of evidence for the idea that desert ants are highly reliant on the presence of UV light to navigate.

It is undoubtedly fascinating to observe animal behaviours, such as navigation, but research that can shed (human visible!) light on the mechanisms underpinning that behaviour is important to fully understand the biology of a species, in all its complex glory.