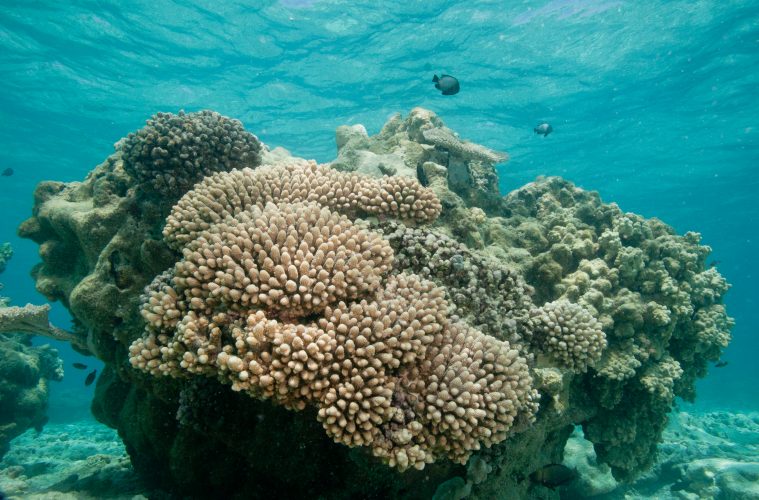 Corals are curious organisms – there really isn’t anything quite like them elsewhere in the animal kingdom. The coral skeleton is formed from calcium carbonate that is extracted from the seawater and concentrated by the coral polyps at the base of their body so that the entire coral can grow – a process known as ‘biomineralisation’. This single chemical process, when viewed at a larger scale, is responsible for the creation of reef systems – structures of immense ecological importance, and geological scale. Researchers from University of Hawai’i at Manoa, University of Haifa and Rutgers University have just achieved an exciting step forward in understanding how the corals build these foundations.

By studying the larvae of the lace coral (Pocillopora damicornis) at different stages of their development, the researchers managed to identify some of the crucial and unique genes that are used by coral to create the calcium carbonate skeleton, and when these are used in the coral’s development – the genetic ‘toolkit’ for reef-building.

Coral larvae have a remarkably different life style to the adult stages, floating freely in open water, lacking any sort of skeleton. They change shape as they develop, eventually settling onto the reef to start building a skeleton.

The researchers looked at which genes were being used or expressed (actively being transcribed from DNA to proteins within cells) at different stages, sequencing the larva’s ‘transcriptome’. They then identified the genes that were being expressed at high levels at specific critical times in the larva’s development. The genes with expression patterns corresponding closely with a specific aspect of the development are likely the ones responsible for that same aspect.

“Together, we described components that were ‘off’ or ‘on’ before and after the first skeletal structures were built, … This approach revealed the quantity and location of important components of the biomineralization machinery, knowledge that allows them to be developed as biomarkers for studies of coral growth in the future.” said Hollie Putnam, co-lead author of the paper.

They found 3882 genes with this ‘differential expression’, which clustered into four distinct expression patterns in all three of the larval stages they studied. Many of these were unique to corals, and the researchers are now trying to describe these in greater detail.

As well as providing a remarkable insight into the molecular machinery that allows corals to build reefs, this genetic toolkit may prove an important resource in understanding how corals are going to cope with the environmental stresses of a changing global climate.

By studying how these genes are regulated in response to different environmental pressures, we may be able to better predict how the skeleton-forming abilities of corals will be affected – of huge importance when it comes to understanding whether and how these beautiful organisms will be able to maintain their vital ecological roles.